She made her mark in Expressionism like no other. Paula Modersohn-Becker was an extremely talented painter. Director Christian Schwochow depicts a strong artist - in spectacular film images in "Paula." 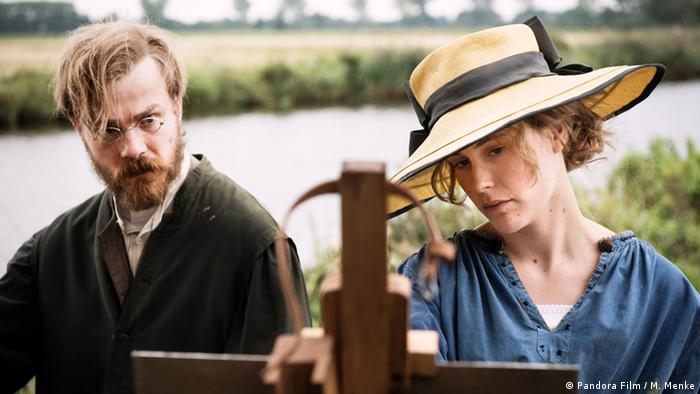 Wearing a frilly dress and donning a straw hat atop a wild mass of curls strung together, a young woman marches through a landscape bathed in light. They are film images resembling paintings - with rich colors compressed into near Impressionistic scenes that evoke a romantic atmosphere on the big screen. The young woman takes huge strides through her new life.

With an easel in tow, Paula - played by Swiss actress Carla Juri - makes her way on foot to the artist village of Worpswede, located in Northern Germany near Bremen. Her alert, curious gaze takes in the things she encounters along the way: day laborers, women farmers, poor dirty kids, who stare point blank at the fine young lady from the city. All of these images will later appear in her pictures.

The moor landscape near Worpweder is unique

Paula wants to learn how to paint. Her father doesn't believe she has any talent, but she gets her way - and signs up at a private art school. In Worpswede, Paula meets Otto Modersohn, 11 years her senior and an established painter among the artistic crowd up North. It's a fateful encounter between two fundamentally different artistic souls, and a story Christian Schwochow chose to depict in his latest cinema film "Paula."

A meeting place for artists

Worpswede was at the time the center of gravity for Germany's artistic avant-garde. Up-and-coming artists and art fans alike made pilgrimages to the place, Schwochow explained in an interview with DW. "These painters, who were generally very conservative, were also hippies and the most sought-after people in the art world," he pointed out. "And that's not only true from our point of view today. Even back then, despite their crass, even misogynist attitudes, they were cool people."

The film flourishes from its strong actors. Albrecht Abraham Schucht, who was born in 1985, lends Modersohn a repressed youthfulness through his inhibited body language. "The circumstances were such that emotions were more or less absent; they had no place," the director noted. "They made a masquerade of things, donning stiff collars, frocks and hats and giving the appearance of being Prussian soldiers. And along comes Paula, a young free-spirited woman."

"Paula was radical and fought her way through as a woman and artist, without seeing herself as being ideological or feminist," Schwochow categorized her. The director himself has an affinity to painting, having intended to study it, but changed his mind to study film instead. To prepare for this movie, he read up widely on the time around 1900, researching these artists. "Paula was not a decorative painter; she wanted to look into the souls of people. She was fascinated by imperfections."

Departure into the Modern Age

The talented young painter was quickly at odds with the established painters of the famous Worpswede artist colony. Attached to the lingering remnants of the then popular Art Nouveau style, the "gentlemen painters" preferred the decorative. It sold well. Art made in Worpswede, dignified still lifes and landscape scenes depicting the moor surroundings of the area, not only adorned the sitting room walls of well-heeled Bremen residents; tourists from around the world also bought them.

Paula's friend Clara Westhoff, only moderately successful as a sculptor, also faced difficulties in her pursuit of an artistic career, said actress Roxane Duran, who plays Clara. "At the beginning of the 20th century, women were tolerated with paintbrushes in hand; they were allowed to be creative," she said. "But Clara Westhoff decided to become a sculptor. That was completely absurd and unheard of in that period in time."

The actress pointed out that Westhoff likely possessed a great deal of strength, confidence and courage to be able to stand up and say, "Yes, we want to unleash our female creativity." 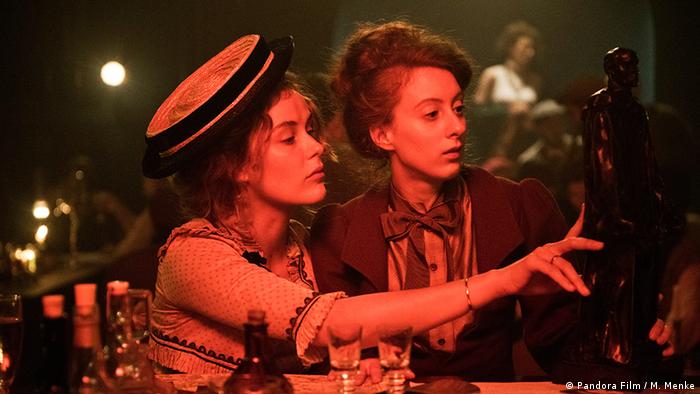 Living it up in Paris: Modersohn-Becker (left) and Clara Westhoff

Schwochow visited Worpswede for the first time in 1990. "The singular light, the image of these landscapes under gray skies, had a profound effect on me," the director reflected on his first impressions. And such images were exactly what he was aiming for when developing the world of color, along with his long-time cinematographer Frank Lamme, for his "Paula" cinema film. The two have known each other since film school and share similar visions for the cinema - a fortunate encounter.

They filmed the intense winter scenes in Finland so that Paula could tromp through the deep, crusted-over snow, determinedly seeking her independence. "I always really liked the way she walked," Carla Juri, who plays Paula in the film, told DW. "She had this very particular way of walking. It always made me grin the way she took these huge steps."

Juri had never been to Finland before making the film. "It makes you feel like you're at the end of the Earth. I liked that very much: All that space and untouched nature around me." 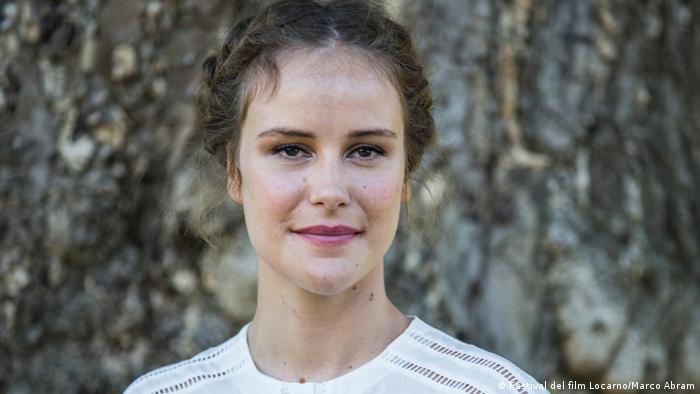 Carla Juri goes to the extremes in her acting

Director Schwochow took his time in casting his leading actress for "Paula." "I was looking for someone who could appreciate this unbending will of an artist who needed to express herself in pictures," he told DW. "And to be uncompromising in her art, even when nobody wanted to buy it." In an unusual move for him, the director flew to London to win over actress Carla Juri for the part.

The talented actress possesses a trait essential for depicting the strong-willed artist, Schwochow said. "Carla has a feel for her because she is non-conformist and rebellious herself. She has great sensitivity and, at the same time, strength to do her thing, even when it rubs people the wrong way."

The drama of the gifted woman 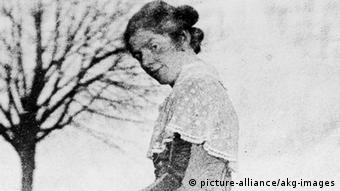 Women were not permitted to study art at the turn of the 20th century in Germany. Paula Modersohn-Becker, at least, enjoyed financial security in her marriage to Otto Modersohn. She had her own studio and could walk to neighboring villages and into the moor landscapes to paint and soul search. The film's color worlds richly reflect that in cinematic still lifes and picturesque images of the landscapes.

Yet Paula did not reap true respect in the established artist colony - something which the movie also conveys. The artist broke free of the corset of her time, throwing security to the wind and taking off - to Paris, the city of art and love. The world of the Worpswede artist colony had become too confining, Schwochow told DW.

City of light, love and art

Once in Paris, the young painter first stays with her artist friend Clara Westhoff, whose brief marriage to poet Rainer Maria Rilke came to a miserable end. Clara is forced to raise her child alone, her dreams of an artistic career long gone. To earn money, she works in the studio of famous sculptor Auguste Rodin. 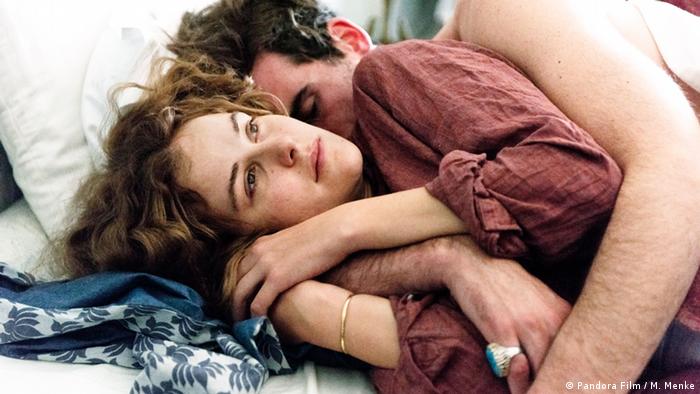 But her friend Paula is not to be deterred: She endeavors on her path to become an independent painter. With just little money, she learns French, takes lessons at an academy, and paints her most important pictures in her tiny room in Paris - the city where she encounters life and the passion of love. Paula repeatedly visits Worpswede - to see Otto, to her family - only to return to Paris and her independence.

Carla Juri goes above and beyond in her physical depiction of the artist in these highly dramatic scenes. She shows no vanity in these intense moments, said Schwochow. "When she wept, snot came out of her nose and that was fine. Things like that don't matter to Carla; she gives it her all and she's not afraid of appearing unattractive." The 31-year-old loves the dedication of being an actress: "The best things happen when you completely forget yourself in a role," Juri told DW. 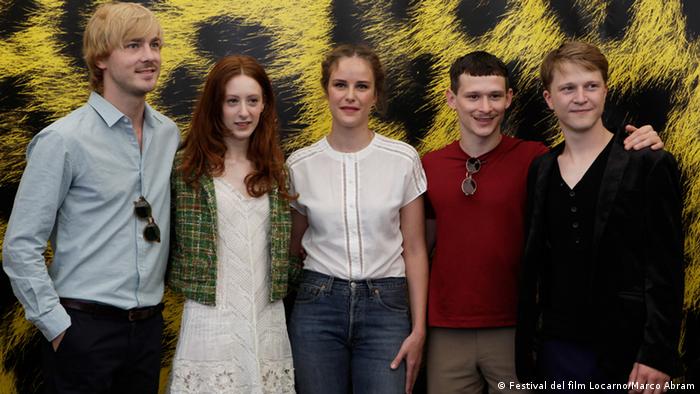 Her colleague Albrecht Abraham Schucht admires the actress's talent. "I hope that in this day and age, it is soon completely normal for there to be as many women as there are men as directors, actors, producers, politicians, or whatever," he told DW. "That enriches the whole experience to see that women and men have different perspectives on the world - and why not tap into this richness as much as possible?"

The 31-year-old actress Carla Juri gained international fame in her role in the scandalous film "Feuchtgebiete" ("Wetlands"). She garnered the "Shooting Star Award" at the Berlinale in 2013, and was nominated as "Best Actress" for the German Film Award in 2014. She meanwhile makes movies with Hollywood greats such as Harrison Ford; her next film, "Blade Runner 2," hits theaters in 2017.

The Walt Disney Studios are the most successful film studios in the world. Fifty years after his death, a new book takes a close look at genius cartoon artist and movie pioneer Walt Disney. (14.12.2016)