For Star Wars fans, a long wait is over: "Rogue One" is in town, the first of many "Star Wars" spinoffs that could prove to be a real blockbuster.

"Rogue One - A Star Wars Story" is a movie to get excited about, even if "Star Wars" fans already know how it must end. You never know - there just might be a secret or new insight that shapes the story in future episodes.

Everyone knows what happens after the 2015 "Episode VII - the Force Awakens." Instead of continuing, however, the story jumps back by about 30 years, putting us firmly between "Episode III - Revenge of the Sith" and "Episode IV - A New Hope." The latter was the very first "Star Wars" film in 1977, and it revolutionized the world of film.

Back to a dark time

We are in an era in which the order of the Jedi knights has been all but wiped out. The dark side of the Force has won the upper hand. Darth Vader has sided with the mighty Emperor. The Empire holds sway over the Galaxy with a reign of terror as a very effective weapon emerges: the Death Star. However, a group of rebels has found out how to get at the plans for the weapon - with the help of the designer's daughter Jyn Erso (Felicity Jones), who was separated from her parents as a child, led a life of crime, and now has nothing to lose. Jyn Erso fights on the side of the good guys

She signs on with the rebels, hoping to see her father (Mats Mikkelsen), who is one of the good guys forced by the bad guy, Director Krennic (Ben Mendelsohn) to finish work on the Death Star. The rebels set out to steal the blueprints, while at the same time, testing of the Death Star begins - with disastrous results.

The settings are dark; the planets come across as dark and sinister; the spaceships look gigantic. The battles, chases and shootouts are elaborate, loud and fast-paced. There's almost non-stop shooting in "Rogue One"; it seems the special effects operators had more work with this film than previous episodes, which weren't tame, either. "Rogue One" is a real war movie, experts have said in advance. After all, it is "Star Wars."

Director Gareth Edwards was responsible for making sure the images don't swamp viewers, but keep them on their toes. Even with clear blue skies, Edwards manages to make the audience feel threatened when a huge Star Destroyer hovers above an inhabited planet or the Death Star blocks the sun. Or when Darth Vader appears: an iconic figure, a former Jedi knight who has become the Galaxy's second most evil creature. Director Krennic is in cahoots with Darth Vader

Darth Vader will let "Star Wars" fans feel right at home, and despite many new characters, the stormtroopers in their white uniforms and Rebel and Empire spaceships are very familiar. An occasional droid zips by, not unlike the R2-D2 model. Princess Leia's adoptive father Bail Organa resurfaces. We've met Rebel leader Mon Mothma in "The Revenge of the Sith," while Rebel General Gial Ackbar, an admiral in later Star Wars films, leads the attack on an Imperial base. You'll meet even more familiar faces - but we don't want to spoil the fun.

The soundtrack, too, takes the audience right into the "Star Wars" universe. Composer Michael Giacchino often quotes the original soundtrack by John Williams.

The new characters blend well with the entire "Star Wars" ensemble, fully rounded all of them; none is cut-and-dried or vapid. Mutinous Jyn is accompanied by Captain Cassian Andor (Diego Luna), a warrior by the name of Baze Malbus (Jiang Wen) and the reprogramed Imperial security droid K-2SO. There's also a blind monk: Chirrut Imwe (Donny Yen) believes in the "Force" and that he has the power to use it against his enemies. Is he one of the few surviving Jedi knights? 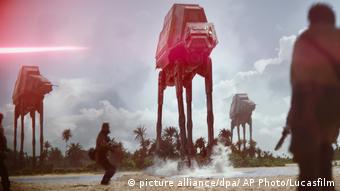 You've sen these machines before

We'd like to see all of the newcomers again, but none of them resurfaces in "Star Wars IV." The end of "Rogue One" blends into the beginning of "Star Wars IV," so this spinoff has told a "Star Wars" story to the every end. It remains to be seen what other story lines might be waiting in the wings for future episodes.

One thing is clear, however: the hype surrounding all things "Star Wars" is a safe bank for the future. The makers of "Star Wars" are adept at keeping fans interested.

Even better, "Rogue One" might even entice "Star Wars" beginners to delve fully into the universe.

Fans were worried when Disney bought the "Star Wars" production company in 2012, and produced Episode VII, fearing "Star Wars" might be reduced to sweetness and cute saucer-shaped eyes. They were relieved to find that the saga continues just like "Star Wars" creator George Lucas designed it. The same is true for "Rogue One." The film rewards fans for the long wait for "Star Wars - Episode VIII," expected to be released at the end of next year.

German student Manuel Ruder has developed a program which turns videos into artworks that resemble those of the the Old Masters. Hollywood has already taken notice of him and his unusual idea. (07.09.2016)

Kenny Baker, who was loved by millions for his portrayal of the spunky droid R2-D2, has died. The British performer had suffered from breathing problems. (14.08.2016)

But don't plan on seeing a double sunset anytime soon - astronomers say the new planet is 3,700 light years from Earth. But the planet appears to be in a Goldilocks zone that could potentially support life. (14.06.2016)