The European Patent Office has disallowed two patents that include great apes, the family of primates that humans also belong to. A US firm had registered the patents for genetically modified chimpanzees. 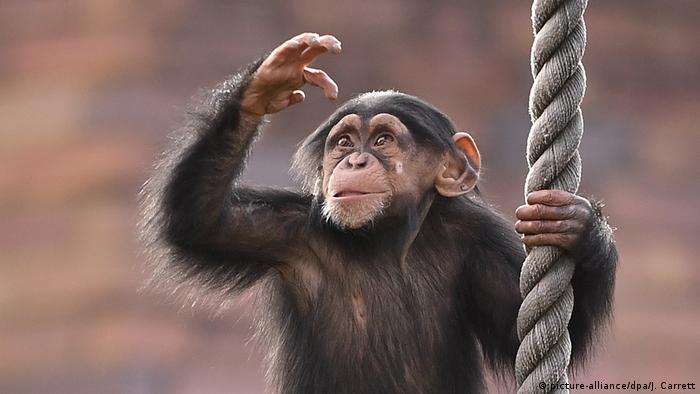 Two patents relating to the genetic modification of apes were removed by the European Patent Office (EPO) on Thursday. The patents themselves still exist but can no longer include apes, an EPO spokesperson said.

Animal welfare activists have celebrated the decision as a success, including world-renowned British primatologist Jane Goodall who called it a "wise and responsible decision."

The assigning of patents resulted in "the suffering of these animals without any substantial medical benefit to man or animal," the EPO said.

The controversy arose after a US company filed two patents claiming that genetically modified chimpanzees as well as other animal species, were an invention that could be used in experiments. The patents were filed in 2012 and 2013, with 14,000 signatories supporting groups that opposed the patents.

Animals are 'not research tools'

Goodall, who has worked with chimpanzees in Tanzania for over 60 years, said "Chimpanzees are our closest relatives, sharing 98.6% of our genetic makeup. All those who understand that genetic modification of these monkeys and other sentient animals is unacceptable will welcome this ruling."

The ruling should be a sign to other companies that "animals are capable of suffering and should not be seen as research tools," she added.

However, many researchers will still be permitted to conduct experiments on primates and other animals, even if they no longer are allowed to hold patents relating to their research.

Other patents under pressure

The question of whether patents can be filed on genetically modified animals has been under discussion for over 30 years. The new ruling does not affect provisions for patents on mice, rats, cats, dogs, cattle, pigs or a number of other animals.

However, the decision will affect other patents relating to primates within Europe, for example in Germany's Max Planck Society, which holds a 2010 patent on primates who were genetically modified to have epilepsy.

Chimpanzees are a species of great ape, the primate family that includes humans.

Protecting chimps from COVID-19 in Uganda

Protecting chimps from the coronavirus in Uganda