Several hours into a partial ceasefire in the Gaza Strip, the Palestinians have accused Israel of breaking its own truce. Meanwhile, one Israeli has been killed in what police said was a "terrorist" attack in Jerusalem. 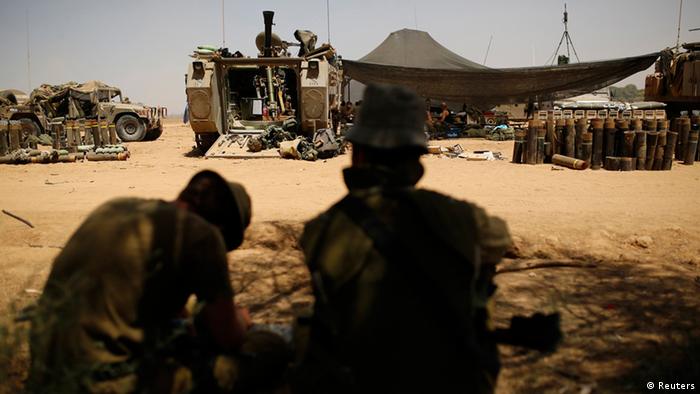 Palestinian sources said an eight-year-old child was killed and around 30 other people wounded in an Israeli airstrike on a house in the Shati refugee camp in the west of Gaza City on Monday. A correspondent with the AFP news agency said the strike occurred six minutes after a partial humanitarian ceasefire came into effect at 0700 UTC - and in an area of Gaza in which the truce was meant to be in force.

When it announced the lull in military activity early on Monday, Israel Defense Forces said that it would not apply to the area around the southern Gaza city of Rafah. They also said they would respond with force if fired at by Hamas or other Islamist militant groups.

The DPA news agency reported meanwhile that Islamist militants continued to fire rockets at Israel during the truce, which was to last for seven hours.

Prior to the unilateral truce coming into force, Hamas expressed suspicion about Israel's motives in declaring the ceasefire.

"The calm Israel declared is unilateral and aims to divert attention away from the Israeli massacres. We do not trust such a calm and we urge our people to exercise caution," Hamas spokesman, Sami Abu Zuhri, said.

Just hours before the truce took effect, an Israeli air strike killed a senior commander of the militant group Islamist Jihad, Daniel Mansour. An IDF spokesperson said that intelligence indicated that Mansour had been responsible for the coordination of rocket attacks on Israel.

The ceasefire came a day after an attack on a United Nations school in Gaza killed 10 Palestinians, drawing condemnation from the UN and the United States, among others.

UN Secretary-General Ban Ki-moon described the attack on the school in Rafah, where around 3,000 Palestinians had sought refuge, as a "moral outrage and criminal act."

US State Department spokeswoman Jen Psaki said Washington was "appalled" by the attack and called for a "full and prompt" investigation. Israel said on Sunday that it had targeted three Islamic Jihad militants near the school.

In Jerusalem, meanwhile, one person was seriously wounded after a construction excavator plowed into a bus on Monday. Police said two others, including the bus driver, sustained less serious injuries in what they have described as a "terrorist attack." A police spokesman said an officer who happened to be in the area opened fire and killed the attacker.

Israel eavesdropped as US Secretary of State John Kerry tried to negotiate Middle East peace by telephone last year, a German magazine says. At least one other intelligence service apparently also listened in. (04.08.2014)

Israel's military says it will hold its fire in a seven-hour truce beginning on Monday. It described the move as a "humanitarian window." (04.08.2014)

Israel's army has confirmed it fired on a target near a UN school in Gaza, an attack that killed at least 10 Palestinian civilians. UN chief Ban Ki-moon called the assault "a moral outrage and a criminal act." (03.08.2014)