Italian racer Alex Zanardi is in intensive care after suffering a severe head trauma in a crash. Zanardi lost his legs 20 years ago in an auto racing accident, prompting his pivot to handbike racing. 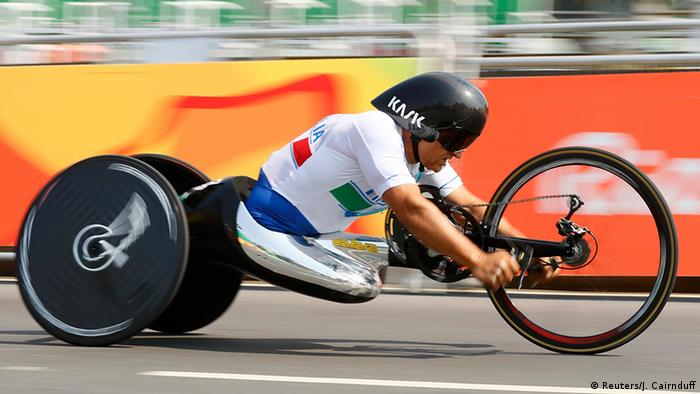 Paralympic racer Alex Zanardi suffered a severe head trauma in a handbike crash on Friday. It comes almost 20 years after he lost both his legs in an auto racing accident at Germany's Lausitzring circuit.

The 53-year-old was competing in an Italian national race for Paralympic athletes called Obiettivo Tricolore near the Tuscan town of Pienza, police said. A helicopter flew him to Santa Maria alle Scotte hospital in Siena, where he arrived in an "extremely grave" condition, according to the hospital.

Giovanni Bova, director of the hospital's emergency room, told RAI state TV that he was taken for urgent neurosurgery.

"It happened on a slightly downhill straightaway just before a slight curve in the road,'' national team coach Mario Valentini told La Repubblica Florence. "Alex veered slightly into the oncoming lane just when a truck came. [The truck] tried to swerve but couldn't avoid the crash."

The paper reported that he remained conscious until medics arrived.

"You've never given up and with your extraordinary strength within you've overcome a thousand troubles. Forza Alex Zanardi,'' Italian Prime Minister Giuseppe Conte said in a message on Twitter. "Don't give up. All of Italy is with you."

American racing legend Mario Andretti said on Twitter: "I am so anxious and frightened about Alex Zanardi that I'm holding my breath. I am his fan. I am his friend. Please do what I'm doing and pray pray [for] this wonderful man."

Zanardi is a hugely popular figure in Italy and a renowned competitor.

He has won four gold medals for handbike racing at the 2012 and 2016 Paralympics. Before this he was an established auto racing star, competing in Formula 1 and CART events until he suffered a horrific crash in Germany 2001 in which he lost both his legs.

In the 2001 crash, his heart reportedly stopped seven times and he lost all but a liter of blood.

He designed his own prosthetics, learned to walk again and then returned to racing in touring cars, before turning to hand cycling.

He has also raced in specially designed cars that allow him to drive without prosthetics.

Two classes at the Paralympics

Athletes like the amputated runner Thin Seng Hong from Cambodia cannot afford expensive protheses and wheelchairs. More support is needed for disabled athletes, 80 percent of whom live in developing countries. (07.09.2012)