Days after announcing his intention to resign, Prime Minister Peter O'Neill has formally stepped down from his post. His resignation puts a major gas deal with French oil and gas giant Total into doubt. 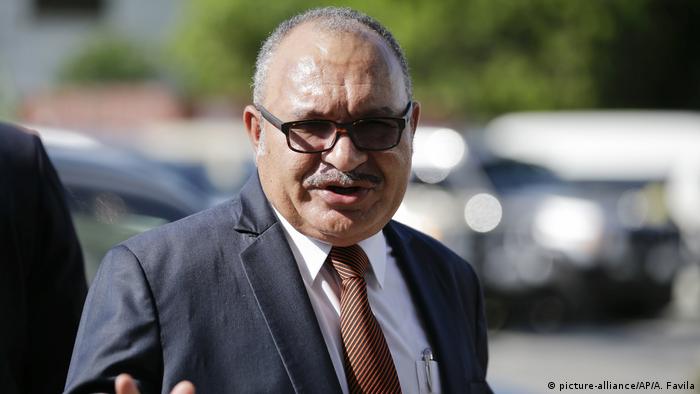 Facing a vote of no-confidence he was likely to lose, O'Neill told parliament in the country's capital of Port Moresby that he had delivered his resignation to Governor-General Bob Dadae on Wednesday morning, an announcement that was met with applause.

Parliament can replace the prime minister, who had been in power since 2011, in its next session, scheduled for Thursday, once his resignation is accepted by Dadae.

"It has been my great honor to serve this nation and lead this nation almost for eight years. Unfortunately politics in PNG plays out this way," he told parliament. "For the interests of the ongoing political stability and to ensure that we create confidence in the business community and the economy so that we can continue to have social unity in the country, it is important that I vacate this seat so that we can be able to move on."

O'Neill has come under fire for his recent $13 billion (€11.6 billion) deal with French and American oil giants Total and ExxonMobil to extract, pipe and ship liquefied natural gas overseas. Local communities had complained about not benefiting from similar deals in the past.

After the signing of the deal, O'Neill's government narrowly avoided a no-confidence vote by adjourning parliament for almost a month.

On Sunday, O'Neill promised he would resign after a string of defections undermined his leadership, but did not officially step down. With lawmakers set to submit a new no-confidence motion, the prime minister lodged an appeal with the Supreme Court, saying he wanted to "ensure clarity of constitutional and legal processes."

But the court on Tuesday refused to hear the case urgently and set proceedings for Friday.

Experts say O'Neill's resignation and the political turbulence in Papua New Guinea could delay or even put an end to resource projects that many claim have benefited only Port Moresby and the country's connected elite.

Papua New Guinea's communications minister has said the government will ban Facebook for a month to weigh its impact on the population. The government is also evaluating the creation of a new state-run social network. (29.05.2018)

Through a series of major investment funds and development aid projects, Australia and China are trying to outbid each other to create networks of power and influence in poorer Pacific nations. (16.11.2018)