While Brontosaurus might have been a phantom, the new Brontomerus is paleontology's latest sweetheart. The so-called 'thunder-thighs' dinosaur kicks its way into the history books. 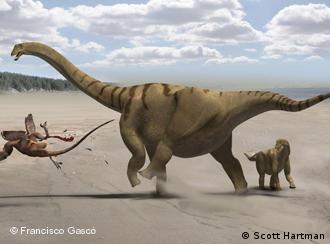 Brontomerus' large legs could have been used for defense

A new dinosaur nicknamed "Thunder Thighs" after its powerful legs has been discovered in the United States. The new species, officially named Brontomerus mcintoshi, was announced in the journal Acta Palaeontologica Polonica by a team of US and UK scientists on Wednesday.

The name Brontomerus, which is Latin for thunder thighs, is derived from the size and shape of the hip bone. The bones suggest the reptile had the largest leg muscles of any dinosaurs in the long-necked sauropod family.

The fossilized remains of an adult and a juvenile Brontomerus were discovered in a quarry in the US state of Utah. Scientists speculated that the larger was the mother and would have been about the size of a large elephant, weighed about six tons and been some 14 meters (46 feet) long, while the juvenile would have been the size of a pony.

Legs made for kicking

Unsurprisingly, it's the massive hips of this dinosaur that are behind most of the attention it's currently receiving. 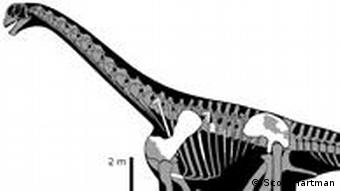 "When we recognized the weird shape of the hip, we wondered what its significance might be, but we concluded that kicking was the most likely," Mike Taylor, a researcher at University College London and an author of the journal article, said in a press release.

"The kick would probably have been used when two males fought over a female, but, given that the mechanics were all in place, it would be bizarre if it wasn't also used in predator defense," he added.

In addition to its powerful thighs, the discovery has also added weight to the view that sauropods were not extinct by the Early Cretaceous period as paleontologists have thought, according to the study's co-author Matt Wedel from the Western University of Health Sciences, in Pomona, California.

"We are finding more sauropods from the Early Cretaceous period, and the picture is changing," Wedel said. "It now seems that sauropods may have been every bit as diverse as they were during the Jurassic, but much less abundant and so much less likely to be found."

One of the Tyrannosaurus rex's direct ancestors was little more than a pint-sized reptile, according to an international team of researchers. A recently rediscovered dinosaur skull shows part of the T. rex's evolution. (05.11.2009)

Back to the Dinosaurs in Berlin

No need to make a run for it when a giant reptile looks as if it's about to start feasting on your leg. The computer-generated creature is part of an exhibit opening Friday at the Museum of Natural History in Berlin. (13.07.2007)

The Dinosaurs are Coming to Germany

ThyssenKrupp has joined forces with US media giant Universal Studios and other partners in a joint venture to build what will be Europe's second-largest amusement park after Disney World in Paris. (02.03.2002)