Pakistan's current government has refused to try former president and top general Pervez Musharraf for treason. According to the caretaker administration, such a move is simply beyond its temporary mandate. 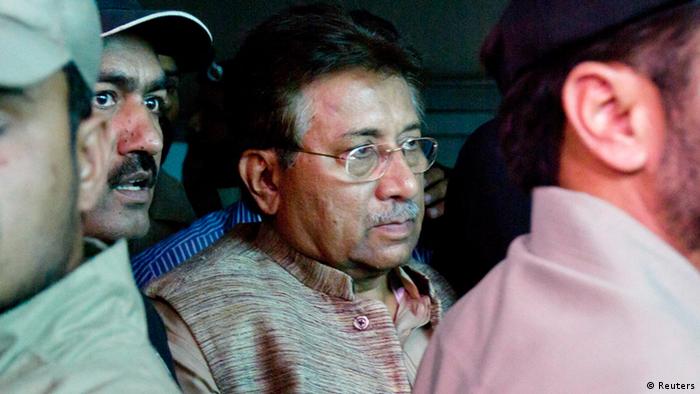 In a statement submitted to Pakistan's Supreme Court Monday, Attorney General Irfan Qadir said that caretaker officials have decided to leave the decision on treason charges to the government elected through the May 11 vote. The decision not to act gives temporary breathing room to Musharraf, already under house arrest for other cases dating to his 1999-2008 period in office.

Police has arrested former Pakistani President Pervez Musharraf in a case revolving around his decision to sack senior judges while in power. It is yet to be seen how the army will react to its former chief's arrest. (19.04.2013)

"It appears that the government is determined not to take any legal action in this matter," presiding Judge Jawad S. Khwaja said as the Supreme Court adjourned a hearing on the treason petition until Tuesday and ordered the authorities to allow Musharraf's lawyers to meet with him.

Lawyers had petitioned the Supreme Court to try Musharraf for treason for a 180-day state of emergency he declared in 2007, a period in which he used broad executive authority against certain members of the judiciary. However, in Pakistan only the state can initiate charges of treason, which can carry the death penalty.

"The caretaker government should avoid taking any controversial step and should not commit any process that is not reversible by the incoming elected government," the administration wrote in a statement read out in Pakistan's top court.

'No urgency' to try Musharraf

The administration took office last month to guide the country of 180 million towards the May 11 vote, billed as a historic democratic transition of power in a country accustomed to periods of military rule.

According to the government, with less than three weeks to go, overseeing the vote is a full-time job, especially amid threats from the Taliban and other groups against some candidates. In the government's words, there is "no urgency" to try Musharraf and the administration needs to "to confine their work to day-to-day routine matters" and "maintain the status quo" for the incoming government.

Musharraf's arrest was ordered by an anti-terrorism court last week in connection with the sacking of judges when he imposed emergency rule in November 2007. On Sunday, his party spokesman said Musharraf had been confined to two rooms of his Islamabad estate and stripped of his personal staff - including lawyers.

He also faces charges of conspiracy to murder the opposition leader Benazir Bhutto in 2007 and over the 2006 death of a rebel leader. Additionally, the Taliban has threatened him with death and Pakistan barred him from running in May's election, blows to the retired general who returned home in March promising to "save" Pakistan after four years in exile.