The Pakistani army has launched a major ground assault in North Waziristan's tribal areas. It comes after two weeks of air strikes on targets associated with the Taliban. 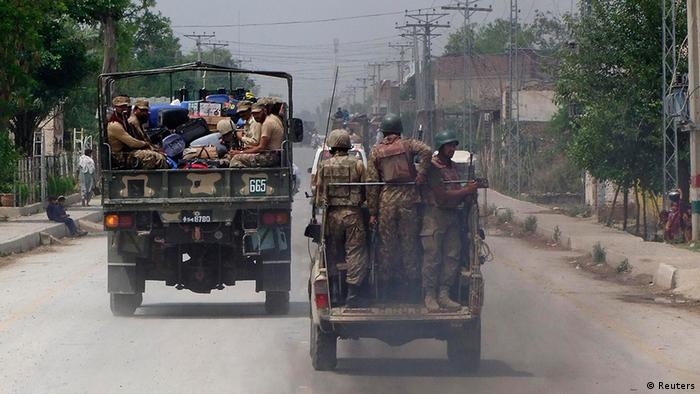 Pakistani forces moved into the northwestern town of Miranshah, the capital of North Waziristan and a Taliban stronghold on Monday. In a statement, the military said it had found underground tunnels and bomb-making factories there.

After evacuating 450,000 civilians in North Waziristan, "a ground operation commenced in and around Miranshah early morning today," the statement read.

"A house to house search of Miranshah town is being carried out by infantry troops and special service group," it added.

The ground assault is part of a larger anti-Taliban offensive that sawweeks of aerial bombardments by Pakistani forces on Taliban targets. The offensive follows months of peace talks between the Pakistani government and insurgents, which yielded little.

During the talks, the Taliban launched several attacks, including an assault on Karachi's airport, which killed 34 people.

Since the military offensive started on June 15, 376 militants have been killed and 19 have surrendered, according to the armed forces. Seventeen soldiers also died.

Pakistan's allies - the US in particular - have long urged Islamabad to tackle and eliminate Taliban and al Qaeda-linked strongholds in North Waziristan.

As hundreds of thousands of people flee a military offensive against the Taliban in northern Pakistan, Bo Schack, UNHCR representative in Afghanistan, tells DW support from the international community is urgently needed. (26.06.2014)