Militants have stormed a police academy in southwestern Pakistan, killing at least 60 and wounding over 100. "Islamic State" has claimed the attack but officials suspect a group tied to the Pakistani Taliban. 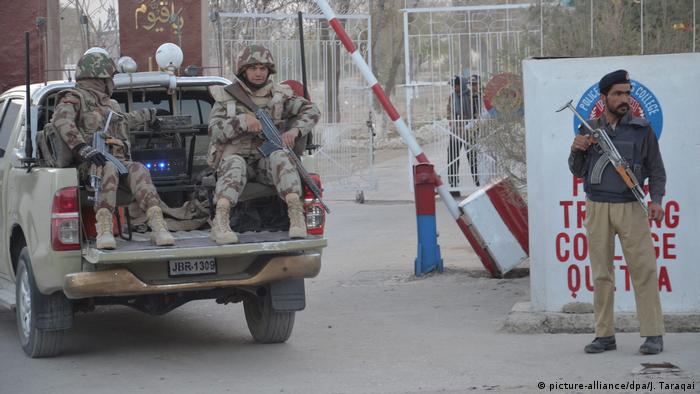 Gunmen wearing explosive vests raided a police training college near the southwestern city of Quetta late on Monday, killing at least 60 people and wounding around 117, officials confirmed on Tuesday.

The brazen attack on the Balochistan Police College ended after security forces launched a military counter-operation against the militants, who took hostages at the facility where some 700 cadets are based. Most of the casualties were police cadets.

"They first targeted the watch tower sentry, and after exchanging fire, killed him and were able to enter the academy grounds," Sarfaraz Bugti, the home minister of Balochistan province, told reporters.

One of the attackers was killed by security forces and two others detonated their suicide vests, resulting in casualties, he said. Earlier, authorities put the number of militants at between four and six.

"I saw three men in camouflage whose faces were hidden carrying Kalashnikovs," one cadet told reporters. "They started firing and entered the dormitory but I managed to escape over a wall."

Survivors recounted how after the initial assault, militants impersonated government troops to trick cadets into letting them inside the secure compound. "They also knocked at the locked rooms and told the cadets that they were from the army, and when the opened the doors, they fired at them," 22-year-old cadet Hikmatullah told the AFP news agency from his hospital bed where he's recovering. "They came in by jumping over the walls of the academy which are very small. I ran away from my room and was hit by a bullet, I still managed to flee."

Major General Sher Afgan, chief of the paramilitary Frontier Corps in Balochistan, said "the attack was over in around three hours after we arrived."

The "Islamic State" (IS) claimed credit for the attack, the third deadiest in Pakistan this year. But Pakistani authorities blamed the Al-Alimi faction of the Lashkar-e-Jhangvi, a militant group tied to the Pakistani Taliban. Bugti tweeted the militants were in contact with "handlers" in Afghanistan. There was no claim yet from the group.

Balochistan has been the center of a low-level Baloch separatist insurgency and the target of Islamist militant attacks in the past. Quetta is a known base for the Taliban.

On Sunday, gunmen from the Baloch Liberation Army killed two coast guards and a civilian in a coastal town in the same province.

A suicide bombing on a hospital in Quetta in August killed 73 people,  many of them lawyers mourning a colleague who had been fatally shot. Both IS and a faction of the Pakistani Taliban claimed the attack.

Opposition leader Imran Khan has vowed to shut down Islamabad until PM Sharif resigns from his post. Experts say that Khan can capitalize on the rifts between the premier and the country's powerful army. (24.10.2016)

Pakistan's Baloch activists accuse Islamabad of committing rights abuses in their province. In recently held rallies in Germany, they complained that while Kashmir continues to dominate news, their plight is ignored. (01.08.2016)

The Supreme Court has ruled that schizophrenia does not qualify as a mental illness, meaning Pakistan can execute a 50-year-old convicted of murdering a cleric in 2001. The ruling called it a "recoverable disease." (21.10.2016)