The hard-line TLP party has agreed to suspend a three-day-long march after the government agreed to drop charges against its leader and consider expelling the French ambassador over caricatures of Prophet Muhammad. 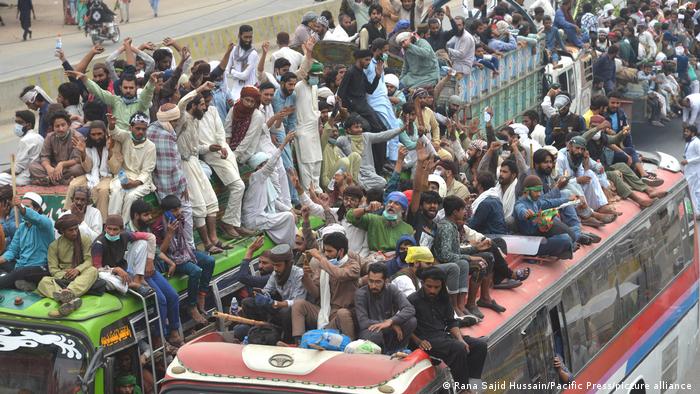 The radical Tehreek-Labbaik Pakistan (TLP) party on Sunday agreed to suspend its march from Lahore toward the capital Islamabad after the government said it would drop pending charges against the party's leader and consider the expulsion of the French ambassador.

"The issue of expelling the French ambassador will be taken to parliament for debate," Interior Minister Sheikh Rashid Ahmed said, adding that the government would drop charges against TLP chief Saad Rizvi and release those arrested at protests in support of Rizvi.

In return, the TLP agreed to stop the march but said supporters would continue a sit-in at the town of Muridke — near Lahore — until the Pakistani government delivers its promises. It was unclear when Rivzi would be released.

At least two policemen have died in clashes in Lahore since Friday, authorities said, adding that at least a dozen officers were injured and several police vehicles were torched.

Thousands of TLP supporters have blocked roads and fired projectiles.

TLP spokesperson Saddam Bukhari said "at least seven" of its supporters died in the clashes, and that hundreds more were injured in clashes with police.

Ahmed said the government was unaware of any deaths of TLP supporters.

Who is the TLP?

Rizvi was arrested in April during demonstrations against the publication in France of caricatures of Islam's Prophet Muhammad. Pakistan refused to expel the French ambassador and instead banned the TLP under the country's anti-terrorism laws.

Rizvi had been detained on a charge of inciting people to assemble unlawfully.

Provincial Law Minister Raja Basharat told The Associated Press that under the agreement, Punjab will withdraw charges against Rizvi and release all those detained during the protest march by Tuesday.

Basharat also said the agreement stipulates that the federal government will honor a previous commitment with the TLP to address diplomatic relations with France over the publication of the caricatures.

The TLP gained prominence in Pakistan's 2018 elections, vowing to defend the country's blasphemy law, which calls for the death penalty for anyone who insults Islam.