Two express trains have collided in southern Pakistan, killing at least 60 passengers, authorities said. The cause for the accident remains unknown. Rescue operations are underway. 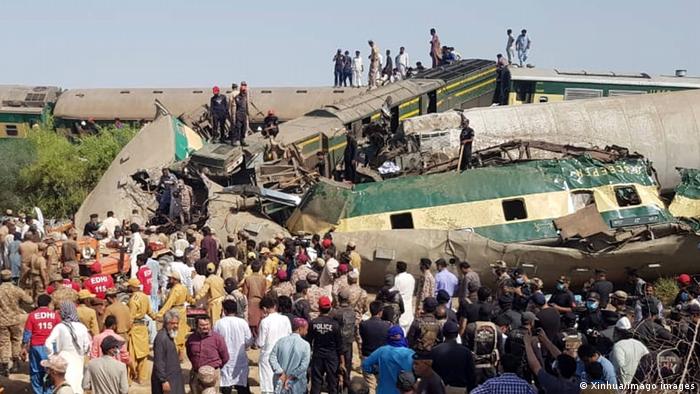 Pakistan sees frequent train accidents, as little attention has been paid to the maintenance of the railway network

Initially officials had placed the number of dead at 40, but later added dozens of victims whose remains have yet to be identified.

The accident occurred in Ghotki district, in Sindh province. Pakistani Prime Minister Imran Khan expressed sorrow over the incident on Twitter, and said an investigation would be conducted into the cause.

The Sir Syed Express train crashed into the Millat express, which had derailed. It wasn't clear what caused the derailment and subsequent crash. About 1,100 passengers were aboard the trains.

Minister for railways Azam Swati told AP news agency, "I am on my way to the Ghotki district where the tragic train accident happened today. We are not sure about the cause of the train accident at this stage," he said.

Police officer Usman Abdullah told AP that police and rescue officials, along with villagers, were transporting the dead and injured passengers to nearby hospitals. Locals were also helping pull out bodies and injured people from the wreckage. 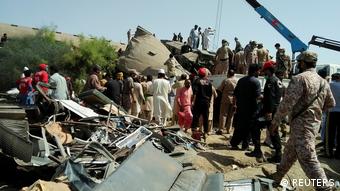 A rescue operation is under way.

"Right now the challenge for us is to quickly rescue those passengers who are still trapped in the wreckage," said district police chief Umar Tufail. At least 50 passengers have been transported to the hospital, where some remain in critical state.

TV channels showed injured passengers being transported in ambulances. Pakistani media reported that heavy machinery to free trapped people was not available at the site for hours after the crash. Mobile phone footage shown on media depicted several green carriages lying on their side.

An injured survivor from the derailed train told local media, "We felt as if we had been thrown away. The second train then hit our train that caused more damage."

Aijaz Ahmed, the driver of the Sir Syed Express train told Pakistan's Geo News TV that on seeing the derailed train cars, he tried his best to avoid the accident by braking but failed.

Chairman of Pakistan railways Habibur Rehman Gilani told Geo News TV that the section of the tracks where the accident took place was old, and needed replacing.

Authorities said troops had also arrived to help out with rescue operations. Military medics and ambulances were dispatched, and military engineers have been sent to the accident site.

A train traveling between Karachi and Rawalpindi caught fire in 2019, killing dozens. A train collision in Karachi had killed 21 passengers in 2016. Pakistan witnesses frequent train accidents, as little attention has been paid to the maintenance and upkeep of railway tracks and signal systems in recent years.

The two trains were heading in opposite directions on the same track when they collided at 3 a.m. local time. Most passengers were asleep when the crash occurred.