Pakistan asks Facebook, Twitter to help track blasphemers | Asia | An in-depth look at news from across the continent | DW | 17.03.2017

Pakistan's prime minister has decreed a crackdown on social media blasphemers in the Islamic Republic. The country's Washington embassy has now contacted Twitter and Facebook to ask for help in its religious fight. 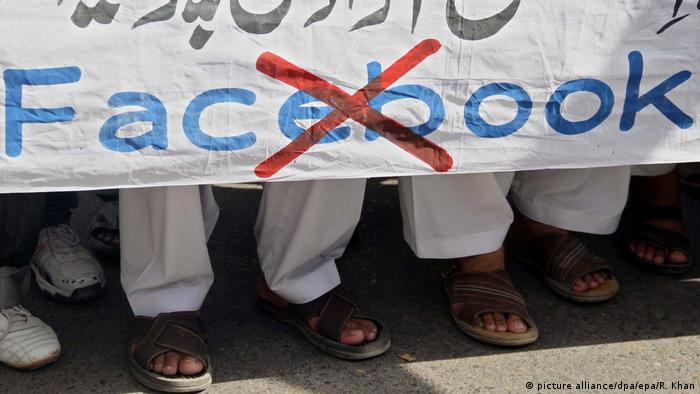 While the Pakistani civil society is campaigning for the recovery of secular activists, a blasphemy complaint has been put forward against the "disappeared" persons.

Irrespective of what Pakistan's top court will rule on the blasphemy-accused Christian woman Asia Bibi's case, it will be viewed globally from a human rights perspective. A crucial test for the country. (12.10.2016)

In another incident of persecution of minorities in Pakistan, the Christian community in a Punjabi village faces the chill wind this time. Despite the intervention of the authorities, the residents fear for their lives. (13.05.2016)

Facebook will send a delegation to Pakistan to help the government fight against online blasphemy, Pakistan's interior ministry said on Friday.

Facebook's reply said it was aware of the government's concerns and that it wanted to resolve the issue via bilateral dialogue and mutual understanding, Pakistan's Ministry of the Interior told media outlets.

He said Pakistani authorities identified 11 people involved in alleged blasphemy and would seek the extradition of anyone living abroad.

The requests came after a call from Prime Minister Nawaz Sharif to crack down on online blasphemy.

"All relevant institutions must unite to hunt those who spread such material and to award them strict punishment under the law," Sharif said.

Facebook told "Associated Press" it reviews all government requests carefully, "with the goal of protecting the privacy and rights of our users."

"We disclose information about accounts solely in accordance with our terms of service and applicable law."

The Pakistani government said it wants to block blasphemous content in blogs and social media such as Facebook and Twitter. Hundreds of websites that show pornography, suicide instructions, or anti-Islamic content were blocked in the country. It ended a block on Youtube after it agreed to work with authorities to censor content.

Pakistan has draconian blasphemy laws which, among other things, allow for the death penalty. Human Rights Watch found that since the 1980s at least 53 people were killed in violent incidents around accusations of blasphemy. It found the laws were often used to persecute religious minorities.