Pakistani officials have denied a claim by the Taliban that the group downed an army helicopter as part of a plot to kill Prime Minister Nawaz Sharif. Two ambassadors died when their helicopter hit a closed school. 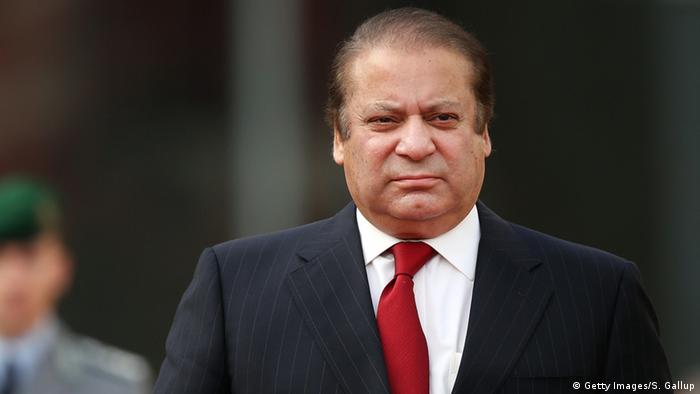 On Friday, Pakistan's military initially reported that both pilots and multiple passengers were killed. A Taliban spokesman said the group had struck the aircraft with a ground-to-air missile hoping to assassinate Sharif (pictured), who had traveled to the same region on a plane, according to officials - not a helicopter.

"A special group of Tehreek-e-Taliban Pakistan had prepared a special plan to target Nawaz Sharif during his visit, but he survived because he was travelling in another helicopter," spokesman Muhammad Khorasani said on Friday.

Officials and news agencies cast immediate doubt on the claim. The Taliban does not have a particularly strong presence in Gilgit-Baltistan, the northern region where the chopper came down, and the group has previously claimed responsibility for incidents it had no involvement in.

Pakistan's Defense Minister Khwaja Asif told DW's Islamabad correspondent, Shakoor Rahim, that the government was investigating the incident. "The initial reports suggest that the helicopter crashed due to technical problems. It was not a terrorist attack. We will continue to investigate what caused the MI-17 crash."

Pakistan's Defense Ministry has announced that it would investigate what caused the crash, in which the helicopter fell onto a school, thankfully shut at the time, and set the building ablaze. Army spokesperson Major General Asim Bajwa had tweeted that the MI-17 helicopter made an emergency landing in Naltar.

Three helicopters set out Friday morning, carrying a delegation of ambassadors to inspect projects on a three-day trip to Gilgit-Baltistan where they would meet with Prime Minister Sharif. According to a statement by Sharif's office, however, the prime minister had taken a plane to the Gilgit area at the time of the incident, but turned back to Islamabad after news of the crash broke.

Sharif "expressed deep grief and sorrow" and announced a day of mourning, according to his office.

Norway's Leif H. Larsen and Domingo D. Lucenario Jr. of the Philippines died in the crash, as did the wives of the Malaysian and Indonesian ambassadors, and the helicopter's two pilots, according to official tweets by the army. The crash also injured Polish Ambassador Andrzej Ananiczolish and Dutch envoy Marcel de Vink, the army announced.

In a statement issued on Friday, the Human Rights Commission of Pakistan's chairperson Zohra Yusuf condoled the death of the Norwegian ambassador: "Our hearts go out to his (Larsen's) family and all those close to him. Lief H. Larsen was a thorough gentleman who worked hard to promote human rights. In his death, Pakistan's civil society has lost not only a fine human being but also an ally and a dependable friend."