A new report has pointed to a sharp increase in military spending by nations including Russia and China. Other top spenders hailed from Africa and the Middle East, where gas and oil are fueling investment. 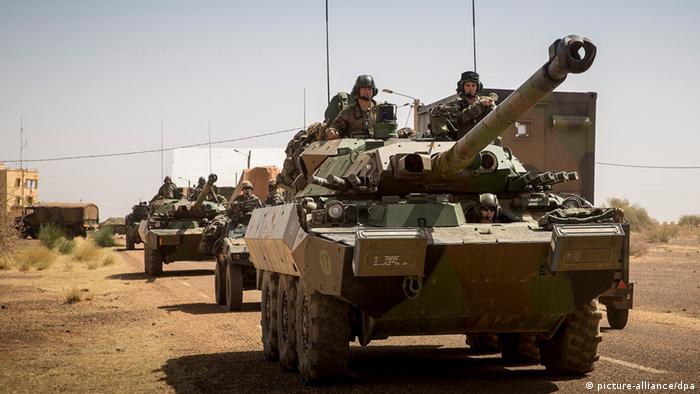 Global military spending totaled $1.7 trillion (1.23 trillion euros) in 2013, a decrease of nearly 2 percent from the previous year. However, this decrease by no means indicates a broader trend of countries across the globe cutting back on military spending, the Stockholm International Peace Research Institute (SIPRI) said on Monday.

According to SIPRI's latest report, the major cause of the 2-percent drop stemmed from changes to the United States' military budget, the top spender in the world. Washington-approved budget cuts led to a 7.8 percent drop year-on-year, down to $640 billion. The withdrawal from Iraq and the winding down of operations in Afghanistan also contributed to the decrease in spending.

Meanwhile, China, Russia and Saudi Arabia sharply increased their spending between 2012 and 2013. Beijing invested 7.4 percent more in its armed forces, bringing its total budget to $188 billion. Saudi Arabia rose from seventh to fourth in the world. In 2013, its military expenditures totaled $67 billion, an increase of 14 percent from the previous year.

The report based its figures on the purchase of arms and equipment, as well as the cost of salaries and military operations.

The head of SIPRI's military expenditure program, Sam Perlo-Freeman, said the causes stemmed from more than one factor.

"In some cases it is the natural result of economic growth or a response to genuine security needs," Perlo-Freeman said. "In other cases it represents a squandering of natural resource revenues, the dominance of autocratic regimes or emerging regional arms races."

Africa – led by oil-and-gas-rich nations Algeria and Angola - spent more than any region in 2013 with a total increase of 8.3 percent year-on-year. Meanwhile in Asia, China's bolstering of its military, combined with territorial disputes with neighboring countries, prompted Japan, the Philippines and Vietnam to also spend more.

SIPRI ranked Russia number three on its list, noting that it had invested a greater percentage of its GDP in its military in 2013, beating out the US for the first time in a decade. Moscow spent 4.1 percent of its GDP on its armed forces, barely overtaking Washington, which spent only 3.8 percent of its GDP on the same sector.

"The goal of building up military capability has been seen as more urgent [by Moscow] since the Georgia war in 2008, which revealed serious shortcomings in Russia's military technology and readiness," he said.

"[However] the economy is a key factor, including especially oil and gas prices," he added. "Many observers believe that the State Armaments Plan is based on over-optimistic economic projections, so that this may act as something of constraint on the rate of increase of military spending."

Moscow's deployment of troops along its southwestern border with Ukraine has worried Western leaders, who are trying to de-escalate tensions between Russian President Vladimir Putin and the transitional government in Kyiv. The SIPRI report noted that the perceived threat of Russian military aggression could also have an influence on EU military spending, which has dropped in the face of the eurozone crisis.

German Economy Minister Sigmar Gabriel has halted a major Russian military contract for the Rheinmetall defense technology group, at least temporarily, in the wake of the ongoing crisis in Crimea. (19.03.2014)

Global arms trade shrinks in 2012, US and European companies dominate

An annual report by Sweden's SIPRI research institute has identified a slight year-on-year reduction in global arms sales for 2012. The report ranks the 100 most successful companies selling military equipment. (31.01.2014)

China gains ground as arms supplier, but US stays on top, SIPRI says

China has replaced France as the world's fourth-biggest exporter of arms, according to a Swedish-based peace research institute. Germany remains in third place, while the US continues to top the table. (17.03.2014)