In the 13 years since Oury Jalloh's death, his case has been shuffled from one prosecutor's office to another. Now a state justice minister has stepped in. And a murder allegation has been filed at the federal level. 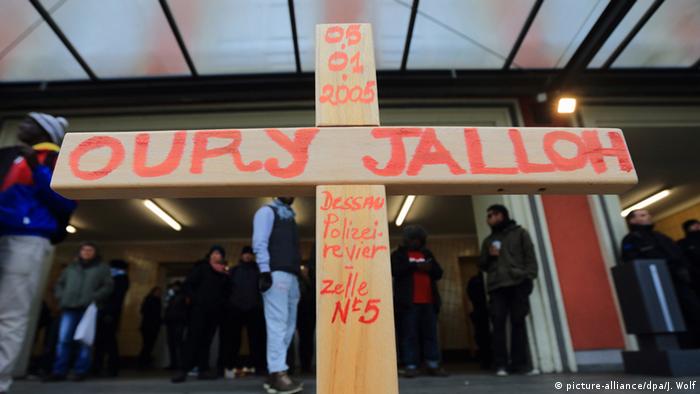 In the latest twist surrounding the investigation into the mysterious death of Sierra Leone asylum seeker Oury Jalloh more than a decade ago, the Saxony-Anhalt justice minister on Thursday handed the case over to the public prosecutor's office in Naumburg. The move comes after pressure from the Left party in state parliament, and protests over a decision last week from a different public prosecutor's office that had determined there was not enough evidence to proceed with a criminal prosecution.

Jalloh died while in police custody in a jail cell in Dessau, Germany, on January 1, 2005. Following his death, investigating authorities concluded that he set himself on fire in the cell after two police officers had arrested him. Relatives and friends of Jalloh, however, have long been convinced that the police killed the 36-year-old. They base that claim on, among other things, forensic evidence.

An investigative reconstruction of the event suggested the use of a fire accelerant. Additionally, a lighter was found shortly after Jalloh's death, one that he was said to have used to set himself on fire. But investigators found no trace of his DNA on it, and further analysis determined that it could not have been in the cell at the time of his death. That was the same conclusion made by Dessau Public Prosecutor Folker Bittmann. In April of this year, he noted an "initial suspicion of murder." Moreover, he wrote that there may have been a cover-up. At that point, the Naumburg public prosecutor's office took the Dessau public prosecutor's office off the investigation.

Criminologist Thomas Feltes told the German investigative television program Monitor that the move was an instance of "political influence" in his estimation. The Naumburg attorney general's office justified its decision in different terms. Press spokesman Klaus Tewe told DW that he did not want to question the independence of the Dessau public prosecutor's office but added that if there was any substance to the suspicion of murder accusation, "it might be a bit awkward if Dessau's public prosecutors were forced to carry out their investigation in cooperation with the Dessau police department." Furthermore, he said Dessau's public prosecutors already had a heavy caseload. He called accusations of political influence a "fairytale," adding: "I am the most senior public prosecutor in the office, and I have never received any directives to that effect." 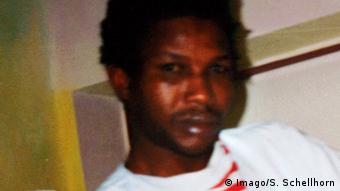 More than a decade after Jalloh's death, his family and friends are still waiting for answers

At that point, the Jalloh case was passed along to the public prosecutor's office in Halle. And that office came to a different conclusion altogether: It closed down the investigation for what it called insufficient evidence to support an initial suspicion of murder. On December 2, hundreds of people in Halle protested against the decision. Now Saxony-Anhalt Justice Minister Anne-Marie Keding has stepped in and on Thursday turned the case back over to the Naumburg public prosecutor's office — the very office from which the investigation was taken away and sent to Halle. That same day, the Left party in Saxony-Anhalt called for a parliamentary inquiry, and even urged Keding to resign over her handling of the case.

Taking things to the next level

Meanwhile, In Berlin on Thursday, the "Initiative in Memory of Oury Jalloh" filed a criminal complaint for murder — this time at the federal level. One thing new about this second claim is that it was not filed against "unknown" but rather against a specific officer, identified as "Police Officer S."

"He did not act alone," emphasized Nadine Saeed, from In Memory of Oury Jalloh, when speaking with DW. But she said that Police Officer S. was the only perpetrator who is clearly implicated by existing evidence.

In reply to an inquiry from DW, the Federal Attorney General's Office said that it had not yet received the murder filing. Should the office determine that it has jurisdiction over the investigation it would take the case to a whole different level, as the Federal Attorney General's Office would then investigate the crime as "an especially serious act of crime committed against state protection directly related to domestic security and the constitutionality of the Federal Republic of Germany."

Members of the Initiative in Memory of Oury Jalloh also suspect political influence is being exerted upon the investigation because they themselves have been the victims of what they say is repression. "We have all been dragged before the court for verbal abuse, on flimsy accusations," they say. "They tried to intimidate us, to criminalize us and make us appear untrustworthy, in the press and in public." The group's legal complaint also alleges that informants have been criminalized. Asked about the allegation, a speaker for Naumburg's public prosecutor's office said: "I have never heard anything about that."