Singing, scouting and starring roles are just some of the many subjects our host Peter Craven discusses with the opera singer Annette Dasch. 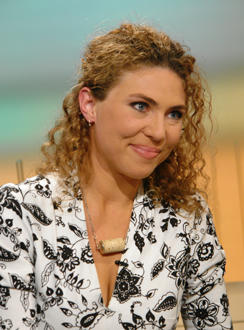 Critics rave about the warm, graceful sound of her voice, enamoured by the natural and expressive power of soprano Annette Dasch. The 33-year-old is one of the leading stars in the international opera scene.

Concerts and engagements from Berlin to Vienna, Milan to New York are a regular part of her calendar. But the native Berliner is anything but an unapproachable diva. She learned her first repertoire of songs as a girl scout, and even today, songs and Lieder are her greatest love – a passion she pursues to its fullest in her self-conceived series of "Dasch Salon" event s in her home city of Berlin. In these very popular performances she pays homage to the art and folksongs of a wide variety of composers, from Schubert to Eisler – with guest performances by members of her talented family and even a spot of audience participation.

Annette Dasch was born as the second of four children to a music-loving family in Berlin. Her father, a juvenile court judge, was a skilled violinist and violist, while her mother Renate had a career as a singer after studying medicine. As a child, the young Annette sang in her school choir. And at home, the family traditionally made music and sang together. Perhaps that’s the reason that today, all four Dasch children are professional musicians. Katrin, the oldest, is a concert pianist; brother Peter is a bass-baritone and successful member of the classical-pop quintet "Adoro;" the youngest brother works as a music teacher.

During her youth, Annette Dasch was an active member of the scouts. She once described this experience as the most intense time of her life. Her active involvement as a girl scout ended when she moved to Munich to begin an academic career in vocal studies. But to this day, Annette Dasch has cherished a love for hiking.

Dasch is among those sopranos who can do more than "just" sing. The 33-year-old is also passionate about truly playing and embodying her roles. For Dasch, the emphasis on this aspect of training is a defining feature of the education of opera singers in Germany.

The soprano’s career gained momentum in 2000, when she won three major singing competitions in a row at home and abroad. What followed were her first singing engagements – at the Neuköllner Opera in Berlin, the Bavarian State Opera in Munich and La Scala in Milan.

In 2006, Dasch made her debut at the Salzburg Festival, one of the world’s most influential classical music events – where performing is a special honor. During the following year’s program, she sang her first starring role in the Haydn Opera "Armida," which brought her great acclaim. At the time, critics prophesied that Dasch would achieve an international career the likes of Russian soprano Anna Netrebko, whose appearance at Salzburg brought her worldwide recognition. The predictions seem spot-on: Dasch’s calendar is booked solid until 2013, and she’ll give her debut at the Metropolitan Opera in New York in November of this year.

Stylistically, Dasch has focused on Baroque operas and works by Mozart. Nevertheless, she has enough ambition to achieve a dramatic change in her repertoire. In the meantime, she has her sights set on the 2010 Bayreuth Festival, where she’ll sing her first major Wagner role.