Our beautiful planet: The eye of Africa | Environment | All topics from climate change to conservation | DW | 24.11.2017

Our beautiful planet: The eye of Africa

The eye of Africa is a huge rock formation in the Sahara that is visible from space. But some mystery still surrounds its origins. 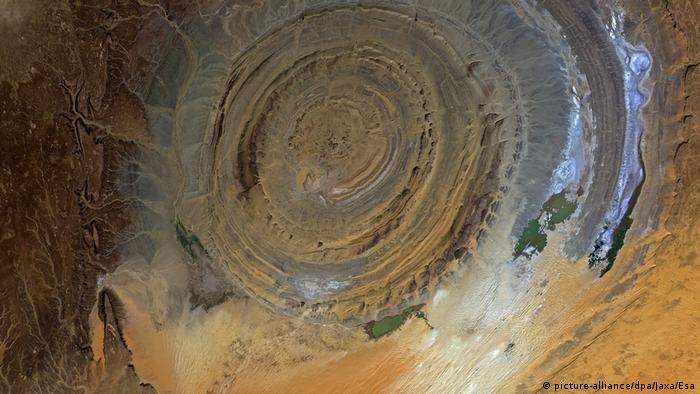 A giant target, a large and winding fossil, a huge eye peering out of the Sahara Desert — these are just a few of the phrases used to describe the Richat Structure.

For thousands of years, the vastness of the geological formation — which has a diameter of 50 kilometers (31 miles) — was not apparent to humans. We first became aware of its immensity in the age of space travel. The "eye of Africa" is now a familiar landmark for astronauts gazing down on the planet, according to the European Space Agency.

The structure is made up of concentric circles of resistant quartzite rocks which form ridges and valleys of less-resistant rock, writes the ESA. Scientists initially thought the eye was a result of a meteor impact. Today, the prevailing theory is that the structure is caused by uplifted rock, which was then shaped by erosion through wind and water.

The formation is surrounded by a sea of dunes in the Western Sahara in Mauritania. Its highest peak stands some 485 meters above sea level.

On this week's Eco Africa, we check out Nairobi's efforts to turn dump sites into green spaces, a cute streaming service called Bearflix and a DJ mixing beats with bee humming to raise awareness about the environment.

How to prevent the planet from becoming an uninhabitable desert 16.02.2022

Deserts across the world are rapidly expanding as more and more soils dry out and lose their fertility. How can we breathe life back into desolate sandy landscapes and green the desert? Here are four ideas.