German opposition politicians are upping the pressure on Defense Minister Karl-Theodor zu Guttenberg. An inquiry into an airstrike that killed dozens of Afghan civilians indicates he knew more than he originally let on. 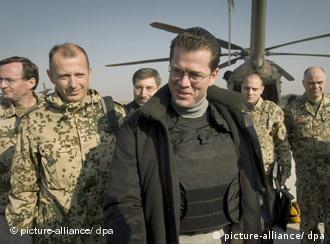 Members of the Green Party and the Social Democrats are saying that Defense Minister Karl-Theodor zu Guttenberg should resign if he lied about being ill-informed regarding a fatal Afghanistan airstrike.

"If Guttenberg is found to have lied in connection with a central leadership decision, his position as defense minister is no longer viable," Social Democratic Party whip Thomas Opperman told the Berliner Zeitung on Friday.

The Greens' spokesman for defense matters, Omid Nouripour, told the ARD television network that Guttenberg should step down if that is proven to be the case. But Nouripour added that he had not yet seen proof in that direction.

Germany's former top military officer, Wolfgang Schneiderhan, told the inquiry on Thursday that Guttenberg had been well briefed about the September 2009 airstrike, which killed as many as 142 Afghan civilians. That contradicts Guttenberg's earlier claims that he was relying on incomplete information when he initially described the attack as "militarily appropriate." He later rescinded that statement.

'Looking for a scapegoat' 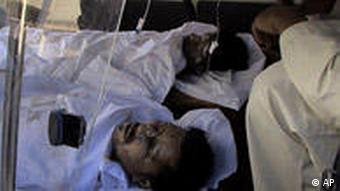 "Minister zu Guttenberg has up to now failed to explain in any way how he came to his mistaken evaluation and how he corrected it," Rainer Arnold, the Social Democrats' expert on defense policy, told Deutsche Presse Agentur on Friday.

"But he has clearly left the impression that he was looking for a scapegoat on to whom he could push off his own responsibilities," Arnold said. "That is generally not respectable."

Guttenberg was serving as economics minister when the incident occurred in September 2009. He became defense minister when Chancellor Angela Merkel assembled her second cabinet in October. Guttenberg replaced fellow Christian Democrat Franz Josef Jung, who resigned in the scandal's aftermath.

Jung will go before the committee next week. Guttenberg's appearance is scheduled for April 22.

German army colonel Georg Klein said during his testimony on Wednesday that he accepted responsibility for the airstrike. He ordered the bombardment of two fuel tankers that he was told had been hijacked by militants.

An inquiry into last year's fatal airstrike in Kunduz, Afghanistan, has begun, with the ruling Christian Democratic Union saying they expect a tough debate and ulterior motives from the opposition. (21.01.2010)

The German government and the opposition are locked in a protracted dispute following a September airstrike in Afghanistan. The handling of information by defense chief Guttenberg is the chief bone of contention. (17.12.2009)