Kunduz airstrike inquiry begins in Berlin | Germany| News and in-depth reporting from Berlin and beyond | DW | 21.01.2010

An inquiry into last year's fatal airstrike in Kunduz, Afghanistan, has begun, with the ruling Christian Democratic Union saying they expect a tough debate and ulterior motives from the opposition. 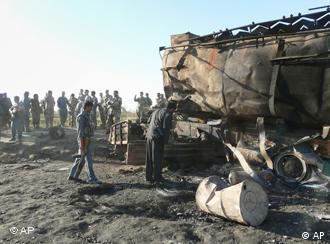 A number of civilians were possibly killed in the attack

The official investigation into a deadly NATO airstrike ordered by a German colonel in Afghanistan last year has now begun in Berlin. It is expected to last at least a year, with 100 requests for items of evidence and around 40 witnesses to be heard from Germany's political and military circles.

The inquiry aims to clarify exactly what happened on September 4 in northern Afghanistan when German Colonel Georg Klein ordered an airstrike on two hijacked fuel tankers. Up to 142 people were killed in the strike, including, it is believed, dozens of civilians.

Besides looking at the exact circumstances of the airstrike, the investigation will examine the chain of political events afterward.

However, the ruling Christian Democratic Party (CDU) has accused the opposition of using the inquiry to score points.

"It already became clear in the inter-party talks that the opposition is not interested in a factual clarification, but in a political farce," said CDU defense spokesman Ernst-Reinhard Beck.

Getting celebrities on the stand

Beck claimed that the opposition had constantly emphasized that the essential facts of the case were already clear in the NATO report on the incident, but still wanted to see government leaders give evidence.

"They only care about celebrities like Guttenberg and Merkel," he said. 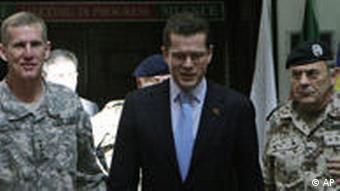 Guttenberg, center, has come under increased pressure over his sacking of Schneiderhan, right

In response, Beck said the CDU would like to call the former foreign minister and Social Democratic Party leader Frank-Walter Steinmeier to explain his part in the aftermath of the attack.

"The entire government is responsible, and the leading department at the time was the foreign ministry under Frank-Walter Steinmeier," Beck said Wednesday.

The opposition parties had tried to force Defense Minister Karl-Theodor zu Guttenberg to give evidence to the inquiry in January. They are particularly interested in asking the minister why he had initially described the attack as "militarily appropriate."

But defense experts from both the CDU and the opposition SPD have since agreed to a compromise that ensures that Guttenberg is unlikely to be questioned before March. But this is still before May's crucial election in North Rhine-Westphalia, Germany's most populous federal state. 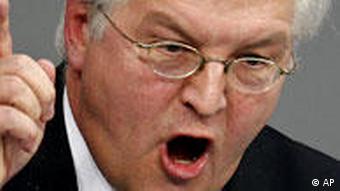 "After a grinding process we've finally agreed on the procedure," SPD defense spokesman Rainer Arnold said. The first three weeks of the inquiry will be devoted to investigating the details of the airstrike itself. Only after these have been established will the inquiry deal with "the whole issue of political communication," Arnold said.

The opposition is particularly interested in getting to the bottom of apparent failures of communication following the attack, in which 142 civilians and Taliban insurgents are said to have been killed.

The chief of the German army Wolfgang Schneiderhan and his deputy both lost their jobs in November last year because they apparently failed to inform the new defense minister of additional reports on the incident. Schneiderhan has since denied the accusation.

Comment by the ISAF chief in Afghanistan on Germany's role in the war-torn region has sparked debate among top politicians on where its future tasks should lie. The opposition has called for a full withdrawal by 2015. (20.01.2010)

Chancellor Angela Merkel is looking to cross party lines and consult with the opposition Social Democrats in order to secure the broadest parliamentary support for the German military's unpopular mission to Afghanistan. (17.01.2010)

SPD to debate German involvement in Afghanistan ahead of London summit

Germany’s opposition Social Democrats are to stage their own conference on Afghanistan to debate Germany’s presence in the country. It will be held one week before London hosts an international summit on the conflict. (09.01.2010)