Opinion: Trump vs. Huawei, and the end of the smartphone?

The trade spat between Washington and Beijing has reached a new level, with the successful Chinese telecoms equipment provider Huawei stuck in the center. DW's Henrik Böhme asks where this all will end. 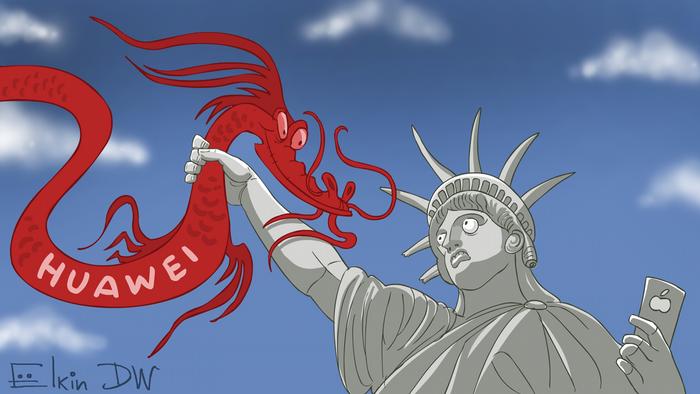 Every day, you ask yourself the same question: What comes next? Since all hopes for a trade agreement between the US and China are dashed, at least for the time being, we keep watching out for more of Donald Trump's Twitter messages to find out who'll become the next victim in this technology cold war.

At the moment, it's Huawei — a successful and equally controversial telecoms equipment provider and smartphone maker. Playing the national security card, Trump has plunged Huawei into crisis mode.

It was one thing to be shut out from developing 5G networks in the US and other nations. But now, with US companies no longer allowed to supply crucial components to Huawei and the smartphone maker having to do without Android and important Google apps, a higher level of confrontation has been reached — one that puts the Chinese firm in real trouble.

Beijing is certain to respond to the assault, although we don't know yet how. It would appear logical for China to target Apple. The Chinese could stop all Apple product sales, to start with. This could mean that the US tech firm would have to issue a profit warning for the first time in 10 years because of plunging sales in China.

Goldman Sachs analysts estimate that Apple's profits could plummet by 30%, should its entire China business be cut off.

The stakes could further be raised if the production of iPhones were banned in China, which would hurt local producers, but even more so Apple. Relocating to, say, Indonesia or Vietnam would take a long time. Trump thinks Apple could just as well produce its phones at home.

This, however, would lead to soaring prices and Apple having to look desperately for skilled labor. (Finding enough skilled workers in China has been no problem.)

Imposing higher tariffs on Chinese imports alone could prompt Apple to hike iPhone prices by up to 14%, according to JPMorgan.

Whatever the outcome of the trade conflict, it will not just affect Huawei or Apple. The production of smartphones is a prime example of how globalization works. In every Huawei phone, there are a large number of components from the US, meaning that suppliers there would lose an important client.

It would also be bad for Japan's Sony, which makes camera chips for almost all smartphones across the globe. And no iPhone can do without a display screen from South Korea's Samsung. Let's not forget British chip specialist ARM, which provides the base for memory chips in smartphones.

Whatever Huawei may come up with to circumvent supply bottlenecks — it can't do anything without using the ARM architecture. But the Brits have also turned their backs on Huawei, stopping further supplies. A whole industry could face a mudslide as a result.

The current situation is reminiscent of the blacklists compiled during the Cold War, which meant that special electronic components could not be exported to Soviet-aligned countries, including East Germany. That resulted in the GDR's using a lot of its precious hard currency to develop alternatives, which eventually sped up the demise of the country.

Don't get me wrong — China will not go under because of its Huawei-related problems. Europe might even profit from Trump's trade war against Beijing. But it would be kind of awkward to have to resort to rotary phones or even smoke signs again to communicate among each other just because smartphones are gone.