Weeks of controversy over the publication of the prophet Mohammed cartoons have led to an increase in attacks on Western symbols in the Islamic world. Uta Thofern observes how the rise in violence leaves the West cold. 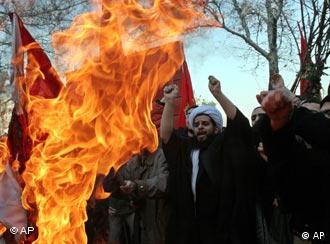 While the Islamic world protests, the West remains silent

In Denmark, dairy workers have been fired, in Russia the editor of a provincial newspaper is afraid of losing her job and in the German capital, an illustrator secretly cleared out his apartment. The victims of the fundamentalist wrath are in our midst, but they receive little by way of solidarity. On the contrary: Such reactions resonate with a crude mixture of allegation and self-incrimination.

Did the Danish press really have to print the Mohammed caricatures? Didn't they know that Islam strictly outlaws the depiction of the prophet? Have the Danes not brought their lot upon themselves in voting for a leader whose standards of political correctness fall short of the mark? And what of the journalists and caricaturists who fan the flames of the conflict by continuing to circulate illustrations with religious connotations? Has the West not done enough to insult the Islamic world already?

Such questions simultaneously reveal a deep sense of guilt and a desire for aquittal on the grounds of converse behavior. Worse still, however, are the questions which seek to justify the extreme and clearly targeted Islamic reactions.

Looking for a scapegoat

Devout Christians believe that Jesus died on the cross to pay for their sins, thus bringing about their salvation. The presumably unfaithful followers of an unconditional western model of tolerance seem to be of the opinion that dismissed dairy workers or an illustrator fleeing death threats can pay the price for the indisputable mistakes of western policies towards Islamic countries.

But this is about nothing more and nothing less than our freedom. Nothing, particularly not the disdainful desire to save one's own skin, can justify the unashamed surrender of the constitutive principles of democracy. Where are the demonstrations to show solidarity with the Berlin illustrator? Who is protesting Russia's restricted press freedom passed off as religious tolerance? And who is calling on the European Union for economic aid for boycott-ridden Denmark?

When it comes to freedom of opinion, we could all do to be Danish. But the majority remains silent, too afraid of voicing an opinion lest they themselves become targets of fundamentalist aggression, for which the preachers of political correctness would tell them, they would have no one to blame but themselves.

It's important to stress that this is not about taking part in religious provocations, nor is it about demanding cheap political solutions. For the most part, political reactions in Europe were appropriate. What is missing is a public uprising in favor of freedom of opinion, in the knowledge that the defense of one's own principles need not necessarily be directed at anyone else.

It is not the quiet and the considerate who call for a battle of the cultures to fairly defend their own values, but those who -- out of fear of going under -- bang their drums from the outset. The cowardly tiptoeing of the West does not help to pacify the conflict, but instead supports the fundamentalists' impressions that the West has no principles, making it a target to be fought and beaten.

Moreover, the Western shyness weakens the moderate powers in the Islamic world who believe in the peaceful co-existence of cultures and freedom within Islam. The lacking willingness among Western democracies to take to the streets for freedom of opinion is a slap in the face for those across the world who are fighting for it with their lives.

Germany's stance on Holocaust denial has been targeted by some Muslims in the current row over Mohammed caricatures. But experts said the pictures -- unlike Holocaust denial -- are likely protected under German law. (Feb. 9, 2005)

Violent Muslim protests over cartoons published in European papers have left the continent reeling. But it's not the first time Europe has a raging blasphemy controversy on its hands. (Feb. 2, 2006)