Opinion: The hooligans came only to fight | Germany| News and in-depth reporting from Berlin and beyond | DW | 27.10.2014

German far-right hooligans, who as a rule think of other hooligan groups as the enemy, have found a common enemy: the Salafist movement. DW's Volker Wagener sees problems on the horizon. 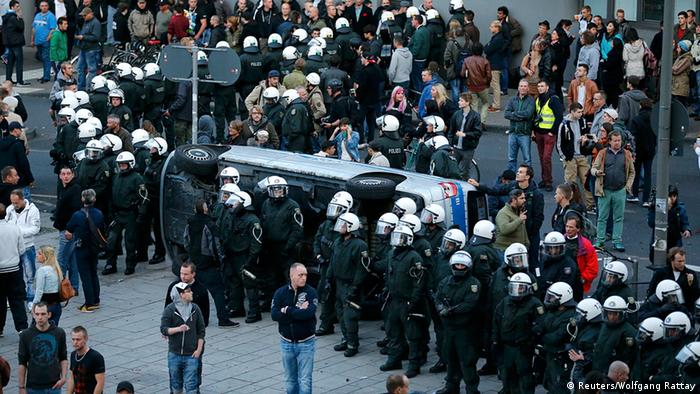 Using German hooligan soccer fans for one's own ends - what a diabolical idea! Pro NRW, a small far-right party active in the state of North-Rhine Westphalia (NRW) and under surveillance by the intelligence agencies, cleverly baited hooligans - notoriously prone to violence. Stand up against the Salafists, oppose the Islamists! Isn't that a cause we can all join? But not alongside those people!

A problem in soccer stadiums

Up until now, hooligans mainly made trouble in and around soccer stadiums and on the Internet. More recently, they've been popping up in inner cities, entirely without the justification of a soccer game. They exploit the general outrage over the crude brutality of Islamists in Syria, Iraq, and Nigeria, presenting themselves as the good guys in the fight against Salafists and the "Islamic State."

Germany's SKB - police officers specializing in dealing with aggressive soccer fans - have detailed knowledge of the hierarchies with hooligan groups. Meanwhile, Islamists seeking to recruit in Germany are looking for young, male Muslims without prospects, and the same definition applies to the hooligan scene - minus the "Muslim" part.

The hooligans are just looking for a pretext to fight, says Volker Wagener

For years, SKB officers have had an eye on an alarming new phenomenon in the scene. Men with tattooed, shaved heads and an alcohol problem are no longer the only ones that act out aggression in the soccer stadiums; increasingly, bored young men from exclusive urban residential districts join the fray. Emotionally neglected, well-to-do young men, often well-educated, who enjoy provoking society. Monday through Friday, they are conformists working on their careers, but on Saturday, they paint the town red. Poorly educated groups associating with spoiled yuppies: it's a dangerous alliance, and it has become a larger group across social boundaries. This is where racism thrives, concealed by criticism of the Salafists.

We must watch out that this attitude doesn't take hold among soccer fans in German stadiums. Our national team and the Bundesliga clubs have won us a fantastic reputation worldwide, not least as a result of the infectiously good mood in Germany's soccer temples. It would be self-destructive if Bayern Munich's Franck Ribery needed a bodyguard because, as a practicing Muslim, he prays publicly before every game.

A new crime scene - that's the new quality of racism in the hooligan scene. They are moving away from the stadiums, seeking to confront authorities in the inner cities. First Dortmund, now Cologne - where tomorrow?

The magnitude of the violence in Cologne on Sunday was alarming - but at the same time, it was telling. There were no Salafists in sight, so the self-proclaimed saviors of Germany took out their aggression on the police. They don't care about political opponents, all they want is violence. And hooligans don't respect state authorities. De-escalation is therefore not an option; all that's left is the full force of the law.

The Salafist scene in Germany is rapidly growing, according to Germany's domestic intelligence chief. Radical Islamists have been adept in recruiting disaffected young Muslim men from families with migrant backgrounds. (25.10.2014)