Opinion: The German team was more than lucky

Germany has progressed to the quarterfinal - but this was more than a close shave, says DW's sports editor Joscha Weber. He thinks Germany has shown: They're no contender for the World Cup. 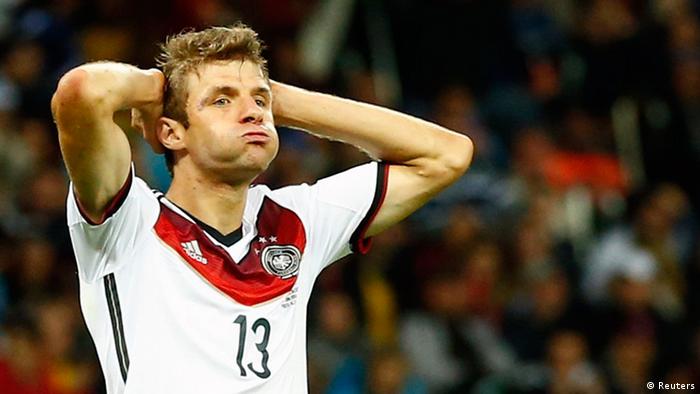 Where to start? The list of deficiencies in the German game was so long on this memorable World Cup evening, that it is easy to lose track. The defense was wretched. The midfield was disoriented. The offense was inefficient.

Yes, Germany has reached the quarterfinal and that is what counts. That's what the pragmatists in the German football association will say today. But this more than lucky 2-1 result against Algeria is worthless unless head coach Joachim Löw draws some conclusions from the match. If he doesn't change track now, Germany will be kicked out of the tournament by France on Friday.

First suggestion, dear Jogi Löw: Please recognize the need and the value of fast full-backs. Since the tournament began, the entire German defense has been made up of central defenders, and has therefore proved to be vulnerable.

Skhodran Mustafi and Benedikt Höwedes appeared unable to stop the fast wingers in the match against Algeria and, in the group stages, Ghana.

Lahm needs to stabilize the defense

It is high time to draw conclusions. Captain Philipp Lahm should return to the position of right back. When he was moved there an hour into the game, following Mustiafi's injury, things improved noticeably. And the coach should give the young left-back Erik Durm the chance to show that he can give more momentum to the German game.

Second proposal: The midfield needs to be completely revamped, so it can finally find more drive. Mesut Özil was totally insecure and uninspired. He needs to be given a break and time to think. Mario Götze did not live up to expectations either, showing none of the speed and fighting spirit Löw had hoped to see.

Goal-getter Andre Schürrle now deserves a place in the starting eleven against France.

Third proposal: Have faith in Miroslav Klose's talent! The German team made nothing of a dozen golden opportunities against Algeria. A striker with a keen instinct to get the ball into the net was sorely missed. But Klose was left to rot on the bench. Why not pull Thomas Müller back a bit, behind Klose as a striker? This setup is the obvious solution, considering Götze's and Özil's lack of efficiency.

One thing is clear: Things cannot continue this way. If the German team plays against France like it did against Algeria, they will get kicked out of the tournament in the quarterfinal.

The German national team needs to wake up - and it needs a different starting eleven. If that doesn't happen, those calling for the team to win the Cup, should save their breath: With this kind of a performance, Germany stands no chance at all!

Germany have reached the World Cup quarter-finals, but they needed extra time and a cheeky Andre Schürrle goal to get there. Despite going down 2-1 in the end, underdogs Algeria put up a furious fight. (30.06.2014)

If you have any trusted homespun remedies for the flu, send German coach Joachim Löw an email. A summer sniffle sidelined center-back Mats Hummels against Algeria, hobbling Germany's defense and attack alike. (01.07.2014)