Opinion: Take Bush at His Word

In a speech in Brussels on Monday, US President George W. Bush committed himself to a renewal of the transatlantic relationship. It was a speech that Europeans would do well to see as an earnest offer of cooperation. 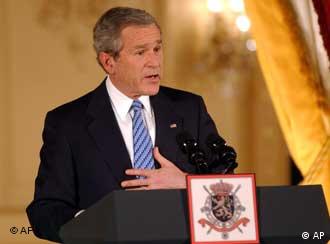 There's no doubt about it: George W. Bush ruffles some serious feathers in Germany and Europe. It's easy to criticize the re-elected US president. At first glance, he fits wonderfully in the role of the cowboy who shoots first and asks questions later.

From this point of view, it's just a matter of time before the next war is launched against Iran or North Korea. Because, as we so often hear, in today's unipolar world, the US wants to assert its interests everywhere as quickly as possible -- if necessary, with military force. Securing oil reserves and maintaining military supremacy is what it's really all about. This is currently the predominant view in Europe, represented also in the opinion pages of reputable newspapers.

What's often forgotten is that the evil with which the European left associates Bush -- namely the Iraq war -- was a direct consequence of the Sept. 11, 2001 terrorist attacks on the United States. The US government remains convinced that radical Islamic terrorism can only be defeated if the conflict in the Middle East is resolved. That's why it attacked Saddam Hussein, the hero of the Palestinians -- despite all the claims that Bush was really concerned about Saddam's supposed ties to al Qaeda.

It's precisely because the starting positions are so different that the transatlantic dialogue is so important. Washington's recognition that the US could really use Europe's help with Iraq has created a window of opportunity for a rapprochement. The Europeans are beginning to understand that American military pressure is beneficial to the EU's diplomatic efforts to convince Tehran to abandon its nuclear program.

At the junctures where European and American interests overlap, Brussels should use the opportunity to closely consult with Washington on its policy. With regard to Syria, this appears to have worked well. Both sides are now increasing pressure on Damascus to pull Syrian troops out of Lebanon. Mutual support in Middle East politics can be decisive in spurring the peace process.

But also when it comes to topics such as the future of NATO, the International Criminal Court and climate change, where no agreement is in sight, there is a need for serious, thorough discussion. The Europe that is currently growing together owes itself that.

It would be wrong to assume that George W. Bush is not prepared to make any concessions because he is only concerned with asserting American interests. Other US presidents who were demonized in Europe in a way similar to Bush showed that they enjoyed considerably more room to move in their second terms, when they could no longer be re-elected.

The fact that Bush is visiting Europe at the start of his second term is a sign that, three and a half years after Sept. 11, 2001, the US needs the support of the Europeans again. Bush made this clear in the speech he gave in Brussels. The Europeans should take him at his word.

Bush in Europe to Mend Ties

US President George W. Bush arrived in Brussels for the start of a European visit aimed at rejuvenating relations after a “passing disagreement” over Iraq and launching a new era of transatlantic unity. (Feb. 21, 2005)

At the NATO Summit on Tuesday, Europe and the US will discuss the direction the alliance will take. Behind all the talk of harmony are some major differences on how much political power the organization should have. (Feb. 22, 2005)

In Brussels, Bush Calls for Unity

US President George W. Bush started off his European visit urging allies to move past Iraq divisions and work together toward peace in the Middle East. (Feb. 22, 2005)