Opinion: Pakistan at crossroads after historic election | World | Breaking news and perspectives from around the globe | DW | 12.05.2013

Former Pakistani PM Sharif has emerged victorious in parliamentary elections but the biggest winners in these historic elections are the Pakistani people who came out to vote despite the fear of the Taliban. 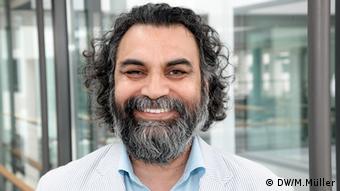 Former Pakistani Prime Minister Nawaz Sharif has declared an early victory of his Muslim League party in Saturday's parliamentary elections. The surprise loss of the Pakistan People's Party (PPP) and the expected rise of Imran Khan's Pakistan Tehreek-e-Insaf (PTI) to the position of second largest party are the clear trends of change in Pakistani politics.

The continuation of the democratic process in Pakistan - with the full term in office of one government and the successful polling to elect a new government, for the first time in the history of Pakistan - is really a great achievement for a country where the military has ruled for more than thirty years collectively and the interim governments have a tendency to stick to power.

This is but the beginning of a very difficult journey ahead. Unlike various poll predictions, Pakistan did not get a split mandate. Sharif's PML-N party has a majority now to form a government on its own. The party has been swept into power in the biggest and arguably by the most influential province of Punjab, which has given Sharif the mandate to rule Pakistan again.

The expectation that the former ruling PPP's loss might benefit Khan's PTI didn't come true, proving that traditional politics still prevail in Punjab, which has been traditionally led by feudal lords. But on the whole, things look quite divided in three smaller provinces. The parties get a split provincial mandate. While Punjab voted for the PML-N, Sindh remained loyal to President Asif Ali Zardari's PPP.

The biggest surprise, however, is the overwhelming performance of the PTI which has defeated both the secular Awami National Party (ANP) and the PPP in the northwestern Khyber Pakhtunkhwa province bordering Afghanistan. Khan's PTI snatched the Hazara area, which is considered the PML-N stronghold. In Baluchistan, Sharif's Muslim League might be heading for a coalition with the Baloch nationalists. Though it is too early to predict anything about Baluchistan, this can still be the political setup in the highly volatile province facing a protracted separatist movement.

No bed of roses

Although each winner is celebrating at the moment, the honeymoon period might not last long.

Sharif has to deliver really quickly on both the national and international front. He is seen as a practical politician in the West and his personal statements about readiness to work with the US government might be of some consolation, but it is easier said than done. His tacit but known soft attitude towards the Islamist militant organizations - be it the Taliban or Lashkar-e-Jhangvi - is part of the victory package. He can't afford to lose his support among these right-wing sections of the Punjab. Also, his focus on Punjabi politics doesn't make him a good politician nationally and internationally.

On the other hand, he has to act fast on his promises to end the country's energy crisis. His election campaign was mainly focussed on domestic issues and he has promised to change the fortunes of the country overnight. Now that the elections are over, people would like to see the change. His immediate performance will be gauged by how he solves the everyday problems of Pakistanis.

In the field of trade and business, Sharif is surely a good choice. His business interests in India could be beneficial in reducing tensions between the two nuclear-armed countries. This, in turn, will have an effect on both the countries' Afghanistan policies and we can expect some softening of the stance from both sides.

At the same time, there might be some major changes in Pakistan's energy relations with Iran. President Zardari collaborated with Iran on the gas pipeline project, which has been openly opposed by the US. But now, it will be interesting to see whether the Saudi-backed Sunni leader Sharif will keep the deal.

Talks with the Taliban

But, the most crucial outcome of the elections is Imran Khan's PTI's landslide victory in Khyber Pakhtunkhwa. Khan's "tsunami" decimated all its rivals in the province. The veteran ANP politician Ghulam Ahmad Bilour conceded defeat honorably by saying, “People were not happy with our performance. We couldn't deliver and the voters have decided in favor of change. The change is there and I wish [the PTI] well.”

Pakistani Pashtuns have voted for change, for peace. Khan's promise for peace is based on the premise of dialogue with the Taliban and an independent foreign policy not dictated by the US. This brings him closer to the right-wing Jamaat-e-Islami party, the other winner in the volatile province. The PTI can easily go into an alliance with Jamaat to form a government in the strategically important region bordering Afghanistan at a time when NATO forces are withdrawing from Kabul.

Defeat of the liberal thought

Last but not least, there is the question of minorities and human rights in Pakistan. With the PPP's defeat, Pakistan now has a predominantly Wahhabi leadership, which strongly supports a compromise with the Taliban. The minority Shiites were targeted with impunity during the tenure of the last government, and now there are fears that this might increase even more, if the governments in Islamabad and the provinces don't take the necessary steps to confront the problem.

Pakistan, as always, remains at a crossroads. The entire world is looking at Pakistan with fear and hope - probably with more fear than hope. It is high time that the new Pakistani leadership ensures the world that there is nothing to fear. There is still hope that the new players that have emerged in Pakistani politics, along with the old ones, are serious about making their country and the world a safer place to live.

Former Pakistani Prime Minister Nawaz Sharif has claimed victory based on vote counts showing his party in the lead. The campaign was marred by violence, and 24 were killed on election day. (11.05.2013)

Pakistan and the return of Nawaz Sharif

Nawaz Sharif is favored to win Pakistan's parliamentary elections on Saturday. Like no other political veteran, Sharif illustrates how complex and encrusted the corridors of power are in nuclear-armed Pakistan. (10.05.2013)

Police in Pakistan have confirmed that Ali Haider Gilani, a son of former Prime Minister Yousuf Raza Gilani, was kidnapped in the southern Punjab province on Thursday. A candidate himself, Gilani was at a campaign rally. (09.05.2013)