As a result of her controversial remarks on motherhood, Andrea Leadsom was forced to give up her candidacy. Now Theresa May, the next British prime minister, is under immense pressure, says DW's Barbara Wesel. 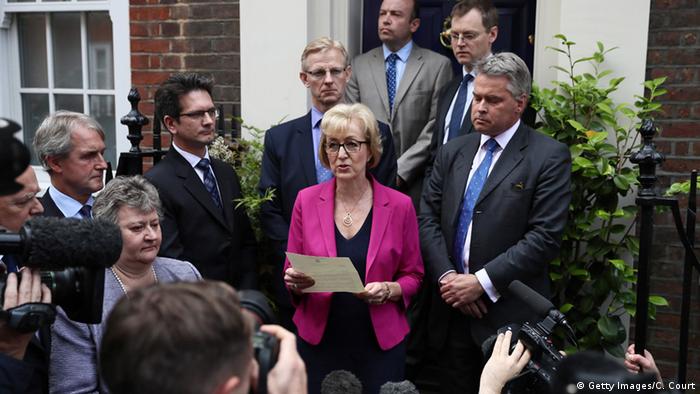 Sadly, female politicians aren't necessarily better human beings. They aren't necessarily fairer campaigners, either - as proven these past days by Andrea Leadsom, a candidate for the post of British prime minister. An interview with "The Times" was her downfall. In it, she pitched herself as the better premier because she is the mother of three children. Mothers, Leadsom argued, have a greater interest in the future than people without children because they are concerned with their offspring's prospects. Thus, they are better suited to take care of a country.

How stupid is that. The debate made headlines for days.

It came across as particularly perfidious as Home Secretary Teresa May had just said in a TV interview that she and her husband regretted being childless. Even if Leadsom sought to stress that she did not want to stab at this wound, the massive stupidity her comments imply should disqualify her from any senior state position.

It was really over and done with when an outraged Leadsom demanded that the "Times" print a retraction, saying she hadn't really said these things. You don't take on the key organ of the British establishment, and certainly not if you're lying: Of course, the reporters had recorded the interview, and of course, Leadsom had said everything exactly as it was printed.

The Brits can congratulate themselves on being spared this woman as their prime minister. It had already previously transpired that her resume's details on her time in investment banking were in part falsified, or to put it more politely, inflated to suggest she was managing investment funds. London bankers piped up in considerable numbers, saying they had never heard of the lady. That doesn't seem to have bothered her supporters in the Leave camp: all they cared about was that Leadsom had fought passionately during the campaign for a British exit from the EU. It was absolutely inconsequential to them that she lied to the people from start to finish, using facts and numbers that have been amply and convincingly refuted. What matters to far-right populists is faith, and as a result, candidates whose characters and intellects should disqualify them are flushed to the top.

So the political turbulences surrounding the Brexit have claimed another victim. By the way, Boris Johnson pretty much shot himself in the foot once again because he, too, was rooting for Andrea Leadsom. Perhaps Johnson should retire from politics altogether and concentrate on writing newspaper columns - at least there, his poor sense of judgement has no consequences. With Leadsom's withdrawal, the Leave camp has run out of major figures: Johnson and Gove of the Tories - no longer in the game. UKIP's Nigel Farage - waiting for better times. The only one left is the Leave campaign's funder Arron Banks, a dubious investment multimillionaire who first supported UKIP, and then Andrea Leadsom. He's now pondering a role in politics for himself - what else?

Pressure on Theresa May

Now Home Secretary Theresa May will simply follow in the footsteps of David Cameron, with no voting involved simply because there are no other candidates. And mind you, we're talking about a Conservative Party whose right wing so fiercely fought EU bureaucrats as allegedly undemocratic because they are not elected. Is that funny, or is it from a script for "House of Cards"?

Theresa May isn't to be envied the position and the political legacy. At least she has enough experience in the government to handle it. But now she must implement the Brexit, which she never wanted, and whose opponents have begun to gather. She won't find "Plan B" in her predecessor's office desk. And she is being pushed to quickly trigger Article 50 in order to liberate the EU from the insecurity of the Brexit. So far, she has neither the personnel nor the experience to steer the difficult exit negotiations. But at least Britain and the rest of Europe will be getting a professional politician and not a fanatic. That in itself is reason enough to be thankful in a way.

British Prime Minister David Cameron has made a statement saying Theresa May will take over as Prime Minister on Wednesday. May became the sole candidate for the post after rival Andrea Leadsom quit the race. (11.07.2016)

Germany: 1 dead in knife attack at asylum shelter 1h ago

Brazil: Funeral held for British journalist murdered in the Amazon 4h ago

Opinion: Ukraine on the way to the West 16h ago