Opinion: Loyal to the end

Beate Zschäpe is presenting herself as an innocent who sought to keep her NSU accomplices from committing murder. Her explanation is a desperate attempt to save what cannot be saved, says DW's Marcel Fürstenau. 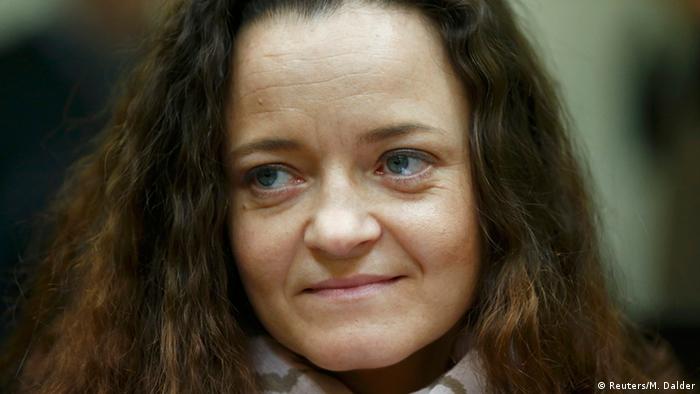 Beate Zschäpe could have saved a lot of lives. But she did not, for fear of losing "her family." That is how the accused in the NSU (National Socialist Underground) murder trial describes her rightwing extremist companions, Uwe Böhnhardt and Uwe Mundlos. The German federal prosecutor is convinced that the two men maliciously killed nine men, with foreign roots, and a German police officer, between the years 2000 and 2007. Zschäpe claims that she was neither involved in planning, nor carrying out the murders. That is extremely hard to believe considering that the trio lived together underground for 13 years.

Compassion for cats, but not for people

She says she was "shocked" and speechless after the murder of Enver Simsek in Nuremberg, the first in the series. Nevertheless, she supposedly couldn't tear herself away from the merciless killers. For fear of a long jail sentence. For fear of losing her beloved Böhnhardt. For fear that the two men would kill themselves.

That is why Zschäpe says she accepted the deaths of nine further victims - unbelievable!

The 40-year-old feels that she bears no criminal responsibility for the murders, nor for the bomb attacks and the injuries that they caused, nor for the bank robberies that the men committed. She never saw herself as a member of the NSU.

This pretend ignorance is an insult to the victims and their families. Who can actually believe that Zschäpe now wants to "honestly" apologize to them? She had the opportunity to do so in 2013. That was when the NSU trial began, and at which point mothers, fathers, and siblings began pleading for answers. We need to now recall those images when weighing the (un)believability of Zschäpe's 53 page statement. The suffering of the victims' relatives and the traumatized bombing victims has, and continues, to simply deflect off of the defendant Zschäpe.

This woman lacks all, and any, empathy for others, but she lovingly cares for her cats! The caring owner even went as far as to bring the cats to safety before blowing up her apartment. To make sure that the poor creatures could go on living without her. At least the accused admitted to having set fire to the apartment that she had shared with Böhnhardt and Mundlos. But she denies accusations that she had anything to do with the creation of the videos claiming responsibility for the murders. She also claims to have heard about each murder only after the fact. Hear nothing, see nothing, say nothing - typical behavior for those who supposedly knew nothing.

Zschäpe has tortured the victims' families

For all that, Zschäpe now feels "morally guilty" for not having stopped her friends from killing. Yet this guilty conscience seems insincere in light of the heinous NSU crimes. The fact that Zschäpe has now broken her silence on the 249th (!) day of the trial, will help her little. The course of the trial thus far gives the impression that a heavy sentence is near certain. She has no doubt earned as much based on the criminal considerations. Yet another accusation cannot be tried in a court of law: that Zschäpe unnecessarily tormented victims' relatives with her long held silence. That, too, is a form of moral guilt.

Suspected neo-Nazi terrorist Beate Zschäpe has made her first personal statement in her two-and-a-half-year trial. She denied prior knowledge of the group's crimes, but feels "morally guilty" for ten murders. (09.12.2015)