Even as the damage caused by hurricane Katrina in the US is assessed, the reason for its brutality is already known -- global warming. It underlines yet again there is no alternative to global climate protection. 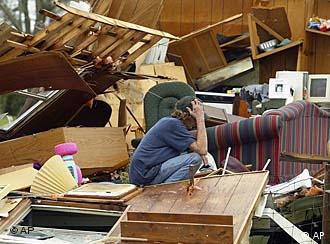 Hurricane Katrina left a trail of destruction in its wake

Damages of about $30 billion, a large city almost completely evacuated and 70 percent of it under water -- hurricane Katrina has proved that water and storms are still the worst natural catastrophes. The southern part of the US is aware of that and has been for a long time. Tropical storms emerging from the warm sea aren't a rarity and the warmer it is, the stronger they are. 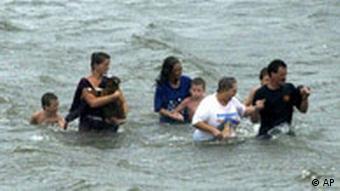 Residents of Moss Point, Miss., make their way to safety.

Not insignificantly, humans have contributed to this new fury unleashed by global climate change -- more concretely, by burning fossil fuels such as oil and coal which in turn release carbon dioxide.

Listening to the experts not fashionable

Climate experts have been saying it for years: it's not the number of hurricanes that's increasing but rather their intensity. But the experts were first ignored by politicians and then mildly snickered at.

At present, their theories are being angrily rejected, even though many of their scenarios are becoming reality, simply because their statements are uncomfortable. That's because the experts also explain what mankind can and must do in order to stop the greenhouse effect -- in order to reduce carbon-dioxide emissions, one needs different energy sources such as wind and sun and more gas instead of coal, more fuel-efficient cars and more energy savings.

All that was popular at the beginning of the 1990s when the world's nations met in Rio de Janeiro and agreed on a global environment policy. The euphoria was heady given that it came about so soon after the fall of the Iron Curtain. Many things , if not all, seemed possible -- even a solution to climate problems.

But much has happened since.

The New Economy collapsed, the horrific vision of international terrorism took shape, the economies of leading industrial nations lurched from crisis to crisis and the preservation of the environment slipped from world attention. The US, which initially helped shape the new global environment policy, shrank back from once concrete steps had to be taken. 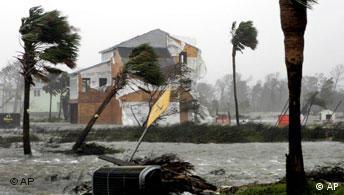 Palm trees are bent from the force of Hurricane Katrina in an area hit by hurricane Ivan last September in the Grande Lagoon area of Pensacola, Florida

The talks on the Kyoto Protocol which began on a hopeful note proved to be laborious and tough. The results are pitiful when compared to the demands.

The treaty, which was sealed in February 2005, allows worldwide emission levels to stagnate, at the very best. Talk of reducing them has all but evaporated and the US is simply not playing along any more.

The Americans love their gas-guzzling pickup trucks and their gigantic refrigerators. The average US citizen consumes twice the amount of energy than the average European, who in turn consumes much more than an African. Soon, the upcoming Asian countries of India and China will ensure that energy consumption will rise drastically. There's no doubt that the outlook for the world climate looks gloomy.

No alternative to global climate protection

Still, there's no alternative to an international effort for climate policy -- the greenhouse effect is hardly restrained by boundaries. 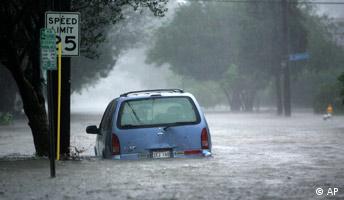 In other words, politicians, in particular US President Bush, must realize that climate experts and scientists aren't some kind of doomsday prophets. Their warnings must finally be taken seriously.

Environment and climate protection is a question of existence, not one of luxury. It's not a matter that politicians only address during good times -- when the economy is humming along -- as is often the case in Germany

If this realization doesn't set in soon, then we're going to have to get used to damages in the billions caused by storms, floods, heat and famine -- damages that at some point we won't be able to pay for.

The head of the Kenya-based UN Environment Program (UNEP) warned Wednesday that the effects of climate change may lead to Earth "spinning out of control" and urged immediate steps to halt global warming. (Feb. 16, 2005)

A new study by the WWF environmental organization shows that temperatures in European cities are on the rise with more extreme weather predicted in the increasingly sticky future. (Aug. 12, 2005)

Flood waters were receding in Europe Saturday, following a weeklong crisis which left at least 70 people dead across the center and east of the continent. (Aug. 27, 2005)