Depending on the extent of Hamas' influence on the next Palestinian government, the West could be in an unprecedented situation when it comes to continued mediation in the Middle East conflict, writes DW's Peter Philipp. 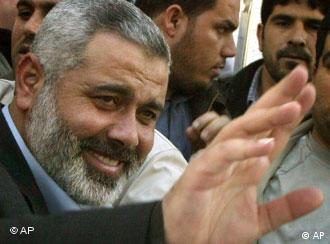 That the militant Islamist movement Hamas would be a serious competitor for Fatah and probably also take up posts in the Palestinian cabinet was a sure thing even before the election. But that Hamas would win an absolute majority and be in a position to form the government itself -- that's something that not even Hamas members or those who voted for them would have thought possible.

For the voters, the Fatah leadership had come to a crossroads: They stood accused of corruption, but what's more, failure in their attempts to reach a peace agreement with Israel.

Hamas, on the other hand, was seen by voters as being incorruptible and ready to take action. That Hamas also stands for the complete rejection of Israel and the peace process, and is responsible for a long series of terrorist attacks -- that was a matter of only secondary or tertiary importance for voters.

Fatah leader Mahmoud Abbas put a brave face on the situation, letting it be known before the election that he could well imagine a coalition with Hamas -- on the condition that Hamas accept his political course. And that means, as in the past, negotiations and peace with Israel. 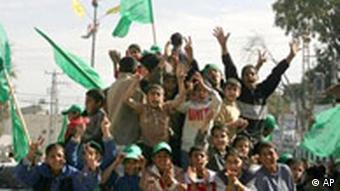 Palestinian supporters of Islamic Hamas wave flags during a rally

If Hamas now forms a government, these plans will become obsolete, unless Hamas itself comes to the understanding that there will be no progress in the Israeli-Palestinian conflict if the Palestinians turn back to the hard, uncompromising lines of the pre-Oslo Accord days, denying Israel's right to exist and using violence and terrorism to achieve their goals.

Hamas did not make such strategies part of their election campaign, but they remain a permanent part of their program. That's why there are serious doubts about how, under these circumstances, there can possibly be a fresh start to peace efforts.

Before the election, it was already clear, particularly in Israel, that Hamas' taking a seat in the Palestinian government would not only create headaches for the Israelis, but also for the United States and the European Union. All of these governments have classified Hamas as a terrorist organization until now, and in the first instance, it's difficult to see how Hamas can suddenly become acceptable in political circles.

Still, Washington has hinted at how it could be done -- you could continue to deal with the Palestinian government, minus its Hamas members. It's a solution that's already been employed in Lebanon, where cabinet members loyal to Hezbollah are ostracized. Like Hamas, Hezbollah is commonly regarded as a terrorist organization in the West. But this solution would no longer be an option if Hamas is the ruling power in the Palestinian government.

The Mideast, Iran, Iraq, Saudi Arabia -- Germany's ties with these nations may be influenced by current conflicts. But the pursuit of peace and stability there has been a central plank of Schröder's foreign policy. (Aug. 15, 2005)