EU Could Increase Palestinian Aid Despite Hamas Victory | Europe | News and current affairs from around the continent | DW | 25.01.2006

Radical Islamist group Hamas is likely to do well in Wednesday's Palestinian parliamentary elections. EU officials have not revealed whether they would cut the bloc's massive aid should the group gain power. 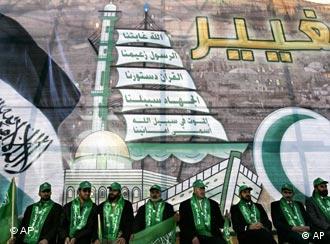 What will happen if Hamas is victorious?

As Palestinians headed to the polls Wednesday to elect a new parliament, EU officials have Whenever she travels to the Middle East, EU External Relations Commissioner Benita Ferrero-Waldner takes along a suitcase full of money. She proudly uses every chance she gets to mention that the European Union is the largest donor to the Palestinian territories.

Last year, about 380 million euros ($589.4 million) made their way from Europe to the Gaza strip and the West Bank and this year, even more money is expected to flow. For the elections, Ferrero-Waldner freed up 18.5 million euros. Another 20 million euros have been set aside for energy supply and environmental protection projects.

The massive aid packages have given EU diplomats the feeling that nothing can happen in the Palestinian territories without the Europeans. The EU holds the financial plug to the Palestinian bath tub, as the bloc's envoy to the Middle East, Marc Otte, once put it.

A lot of money goes to the Palestinian Authority and local politicians to help set up a civil administration, a judicial and police system and to support small and medium-sized businesses. The largest sum -- 122 million euros -- is still set aside for food and refugee aid that is distributed by the UN's aid organizations. 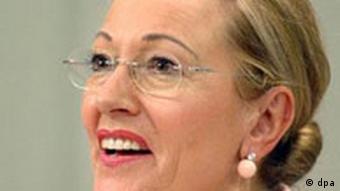 Accusations that the money has been misappropriated, mainly during the time when the late Palestinian leader Yasser Arafat was still personally overseeing the fund, have now been proven to be wrong, according to Ferrero-Waldner.

"All inquiries by the EU agency that combats fraud have shown that no embezzlement took place," she said. "That's why the Palestinian Authority is able to use the funds correctly with our help."

The EU as impartial mediator

The EU plans to spend three million euros for border controls between the Gaza strip and Egypt at Rafah crossing point. It is money well spent, according to EU foreign policy chief Javier Solana: The 70 EU officials that advise on border controls have been welcomed by Israel, the Palestinians and the US. Solana enjoys the role of impartial mediator and is constantly trying to expand the EU's political weight in the Middle East.

With such large financial aid in tow, Solana is also trying to exert pressure on the Palestinian leadership and Hamas, the radical Islamist faction behind a majority of attacks on Israel, which could likely form part of the government after Wednesday's election. 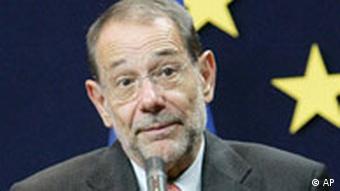 In December, Solana threatened to cut off funds should Hamas join the government, leading a Hamas representative to complain to EU election observers in Ramallah.

Israel and the US refuse to have contacts with Hamas. The EU has blacklisted the group after many terrorist attacks. But officials do maintain contact with Hamas' civilian branch, saying that the group does play an important role in setting up social structures in the Palestinian territories.

During her last appearance before the European Parliament a few days ago, Ferrero-Waldner did not say what the EU would do should Hamas win the elections. She said diplomatically that the EU would respect the election outcome and cooperate with anyone who adheres to a non-violent path to peace. The EU Commission has even offered to double aid in the coming years. 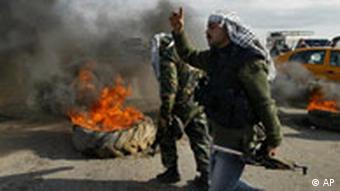 Violence, not economic development, still dominates in the Gaza strip

"This only makes sense if Israel and Palestine work together constructively and EU members states approve," she said. "We have to find the right conditions, the right climate and surroundings."

Many EU planers believe that contacts and trade opportunities with the rest of the world are key to a viable Palestinian state that is meant to be the outcome of the so-called "road map to peace."

That's why Ferrero-Waldner announced that the EU was willing to spend 25 million euros on a cargo terminal at Gaza airport during her last visit. The only problem is that the airport itself was destroyed by the Israeli army during the last intifada: Both runway and tower have been wrecked. 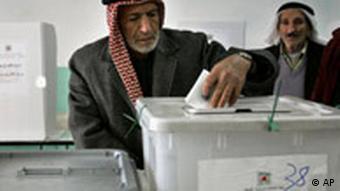 Palestinians now have to decide

The unwillingness by Hamas officials to renounce violence is also likely to make Europeans think twice about increasing their aid. Hamas officials vowed Wednesday not to disarm or negotiate with the Jewish state if it enters the Palestinian parliament after the election.

Unbowed by international pressure to lay down arms if his party achieves the electoral success many predict, chief candidate Ismail Haniya said there was no contradiction between guns and democracy as he voted in a Gaza refugee camp.

An EU investigation has established there was "no conclusive evidence" that European Commission aid to the Palestinian Authority was used to finance armed attacks or unlawful activities. (March 18, 2005)