″Germans Should Invest in the Gaza Strip″ | Business| Economy and finance news from a German perspective | DW | 23.09.2005 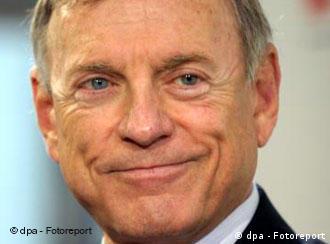 Primor: Both Germany and Israeli should invest more in each other

Avi Primor, formerly Israel's ambassador to Germany, is the president of the Israeli-German Chamber of Commerce. DW-WORLD spoke to him in Berlin on the occasion of the annual German-Israeli Business Day.

DW-WORLD: How would you sum up 40 years of German-Israeli business relations?

Avi Primor: The business relations weren't always very interesting. There were times, at the very beginning, when the Israelis didn't want to buy any German products at all. Our products didn't make it to Germany because the quality was poor. But because the relationship actually started with the Reparations Treaty -- and the Reparations Treaty didn't mean that Germany gave us cash, but instead machines, spare parts, train engines, ships and such things -- the Israelis gradually became accustomed to German industrial products. After the end of the Reparations Treaty, in 1964, the Israelis simply continued to import industrial products from Germany, so that Germany has gradually became our largest trade partner -- especially industrial trade -- after the United States. Our exports to Germany have never developed to the extent of our imports from Germany, but it also increased.

But there was another problem. The Germans have for various reasons practically never invested in Israel. There were businessmen who were avoided traveling to Israel and investing there. In view of the past, they may have been scared. An additional reason is surely the political situation in the Middle East and the insecurity in Israel. In the early 1990s that gradually changed, with the 1993 Oslo Accord. There was still turbulence, but I would say that Germany is today a well-balanced partner to Israel and still the second most important one after the United States.

If you look at the figures, things look quite rosy. Trade is booming, exports between the two countries in 2004 reached double-digit levels. You must be satisfied.

Overall, I am satisfied. However, I still think that one could do much more, particularly in terms of investments. In the 1990s, above all during the time of the Oslo Accord between the Israelis and Palestinians, the Germans became somewhat more daring. They were less afraid and started to invest in Israel. Unfortunately, that didn't always progress very well because of the Intifada, the Palestinian uprising. I think that one could do much more and invest much more. The Israelis, too, could invest more in Germany. It's true that there are businesspeople in Israel who have invested in Germany, especially in the new (eastern) German states, but there's still a lot to do.

The stagnant peace process in the Middle East has for years been a constant problem for business ties. How can German and Israeli business contribute to a peaceful solution of the conflict between the Israelis and Palestinians? 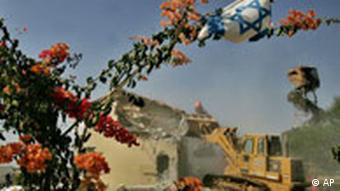 A bulldozer destroys a house in the Jewish settlement of Morag in the southern Gaza Strip Monday Aug. 22, 2005. Israeli bulldozers began leveling homes in the evacuated Gaza settlements Sunday, reducing once-thriving villages within hours to refuse dumps and sealing the fate of Jewish settlement in the coastal strip. After the settlements in Gaza are completely evacuated and knocked down, Israel is to turn Gaza over to Palestinian control for the first time.(AP Photo/Kevin Frayer)

I think that we will have peace with the Palestinians when the Palestinians have better living conditions and don't live in misery as they do today. That also means investments. For Israel, it means making the occupation looser. Part of the occupation doesn't exist anymore since we recently evacuated the Gaza Strip. Now we have to ensure that the people in the Gaza Strip can profit from peace and understand that peace is more advantageous for them than war and terror.

That's why people should invest in the Gaza Strip and that's something Germans and Israelis could possibly do together. With the Germans so far feeling insecure in the Gaza Strip and not having the confidence to invest there, and the Israelis being unwanted there, one could, for example, build industries along the border. These industries would profit from Palestinian workers -- who are not only cheaper but also experienced workers because they worked in Israeli industry in the past -- as well as from the Israeli infrastructure. That could be interesting as a first step, since it would not only mean work for the Palestinians, but also the gradual development of the Palestinians' industrial infrastructure. It could be profitable for everyone involved. Business should and could do a lot and would turn a very good profit.

So you're appealing to German and Israeli businesspeople to invest jointly in Gaza?

Yes, in Gaza to start with, but a second step would be to invest in the West Bank too. That's also possible, not everywhere, but I expect the occupation there to gradually recede somehow as well. It won't happen at once, but in stages. Investment is also highly necessary there and business could make a good profit. (German business) could very well cooperate with Israeli business people, who know the ropes and have experience there.

Israel has succeeded in the dramatic change from an economy defined by agriculture to one focused on high tech. Are there lessons for Germany in Israel's example?

Yes, of course, there are lessons for the Germans. In high-tech industries in particular, they have invested little compared to France or America. Israel gradually developed into an industrialized country and from there towards high-tech industry. The Germans are not very progressive in this area. In the area of services Germany is not as progressive as it should and could be. There, Israelis could invest in Germany. There are already Israeli investments in high tech on location, especially in Germany's new states.

Germany has had massive economic problems for years. Unemployment and the deficit are, growth is low. How do Israelis view Germany at the moment?

German industry looks just as it is. It appears as a stagnating business. It's been that way for a couple of years now, and in Israel people think that the election could perhaps change something. We understand very well that business has a lot to do with psychology. We never experienced such bad years for business as during the three years of the Intifada. For the first time in our history our gross national product shrunk.

Since the shift in the public mood as a result of the plan to pull out of the Gaza Strip, we have again experienced a boom and now the gross national product is already growing around 5 percent per year. In 2004 it was already 4 percent. This year it will be 5 percent and we expect even more next year. What caused it? Just one element: people's mood. We have been waiting for a turnaround in Germany, because we thought that the election would have an effect. At the moment, it unfortunately doesn't look that way. Something has to happen for the Germans to have confidence in themselves and their future. Reforms alone can't stimulate the economy.

Germany and Israel Far From Normality

Forty years ago this month, Germany and Israel took up diplomatic relations for the first time since WWII. The relationship, though very friendly, is anything but normal, say experts. And that won't change any time soon. (Feb. 2, 2005)

Germany and Israel celebrate 40 years of diplomatic relations on Thursday. While they have been characterized as peaceful and relaxed, "normal" relations are still far away. (May 12, 2005)

A Manifestation of German-Israeli Dialogue

Israeli writer Amos Oz will receive the Goethe Prize from the city of Frankfurt on Sunday. DW-WORLD spoke with him about his work, his ties to Germany and his political activities. (Aug. 25, 2005)