Banning the import of second-hand clothes is not the answer to reviving East Africa's textile industry. But the deal to phase out the imports also hands another political score to the US, writes DW's Isaac Mugabi. 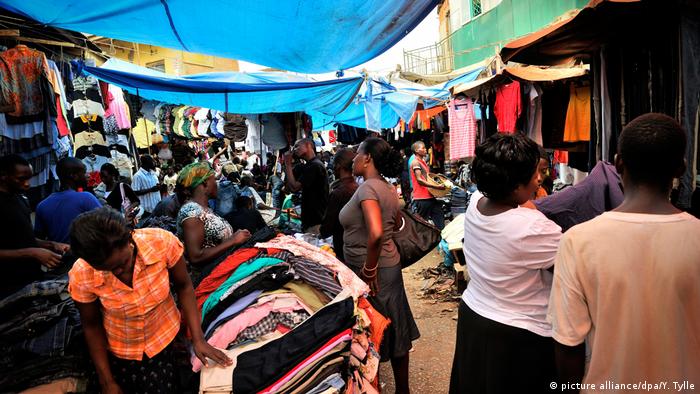 The move to not ban the sale of second-hand clothing was a relief to petty traders. In 2015, Kenya, Rwanda, Uganda, and Tanzania agreed on a three-year plan to gradually phase out the importation of second-hand clothes and apparel from the United States in particular. Taxes were increased exponentially on second-hand clothes to deter more imports and a complete ban was to take effect in 2019. But the ban would have come at a heavy price.

Sensing the danger, the Trump administration acted fast and issued an ultimatum for 23 February 2018, for these leaders to rescind their plan or face the consequences. The US did this to protect its second-hand export sector. And on that date before the ultimatum expired, leaders from the East Africa region, with the exception of Rwanda's Paul Kagame, met in Kampala to discuss the repercussions. In the end they caved in to US demands.

However, the trade deficit for many African countries is instantly recognizable. Imports from Rwanda, Tanzania, and Uganda to the US totaled $43 million (€34 million) in 2016, while US exports to the same countries amounted to $281 million, according to figures from the office of the United States Trade Representative (USTR).

This is not fair trade as preached by the Americans and Europeans, and this is why proponents of this ban argue that these countries have not benefitted much from the African Growth and Opportunity Act (AGOA), a brainchild of former US President George W. Bush, that was meant to enable countries in sub Saharan Africa to export textiles to the United States. AGOA ironically ended up benefitting the United States.

A ban on second-hand clothes is premised on the fact that promoting East Africa's textile industries will provide thousands of jobs. And with this idea at the back of their minds, the leaders wanted to bring an end to the protectionist policy being pushed by the Trump administration. Now that they have swallowed the bitter pill, it's a partial victory for the Trump administration and business will continue as usual.

To understand the effect of such a ban if it was to be imposed one has to be conversant with the economic situation and social dynamics of ordinary people in the three countries. Firstly, downtown markets that serve as the main hubs of second-hand clothes and shoes employ thousands and are a source of much-needed revenue for local governments. Millions in taxes are collected on a daily basis which in return finance projects and other infrastructure that the people also need.

And besides that, both the poor and the rich buy from these markets, with the latter preferring to use middlemen who do the shopping for them. The common denominator is the quest for quality brands from well-known designers like Yves Saint Laurent, Gucci, and Dolce & Gabbana etc.

Many consumers in Africa shun new products from China and other countries because of their perceived poor quality. Secondly, as much as the struggle for self-dependence and living a dignified life is understandably the way to go – countries in East Africa don't have enough factories that that can satisfy the demand for stylish clothes. Africa's celebrated designers also have challenges catering to all styles and wishes. It will take some time before Africans start appreciating the work of their own fashion designers.

In addition to that, many Africans live in abject poverty, and in rural areas, people live off their small plots of land. How can they afford new garments if survival is another daily struggle?

At a recent leadership retreat in Rwanda President Paul Kagame, who never minces his words, put his city mayors to task to explain why there were malnourished children who were not attending school in some areas.

For many consumers, affordability is what matters most and this is not the time for their governments to start thinking otherwise. In a continent where many people still live on under one dollar day, a second-hand clothes ban creats more problems than solutions.

Cameroonian markets have been flooded with second-hand clothes from Europe and the United States. Consumers prefer to buy from Germany because of its high quality products. (21.10.2016)