Opinion: Bad Brexit actors, no romance and a dull plot | Business | Economy and finance news from a German perspective | DW | 01.02.2019

Brexit is no longer the gripping political drama it once was. As the show limps to a finale, DW's Kate Ferguson argues it's the writers who are to blame. 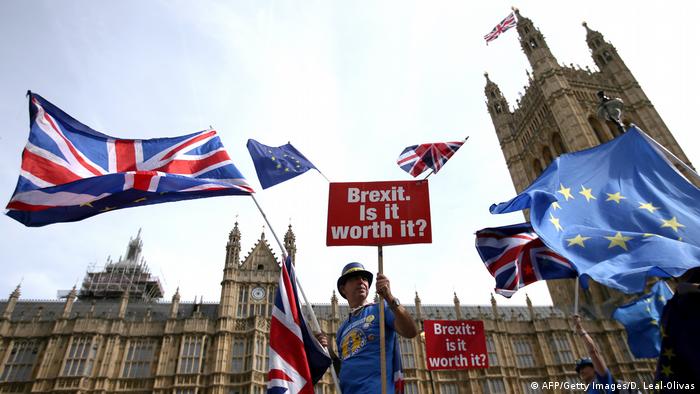 I get it. Writing a drama is hard.

There are so many things to think about. Characters. Plot. Pacing. Dialogue.

And when you've got a following as large as Brexit does, the pressure to deliver must be huge.

But I can't hold back any longer. The last few episodes have been woeful! It's got to the point where I can no longer bear to watch the show.

Don't get me wrong. It started off brilliantly. I remember literally holding my breath as the votes were being counted in the middle of season one.

The writers had done a fantastic job of building up tension. I was totally emotionally invested when the referendum came around.

I mean, just think back to the first episode where David and Nigel play cricket. It's clear from their angry batting that they hate each other. At one point, Nigel hits a six. His teammates go wild, waving Union Jacks stuck on cocktail sticks around and shouting "take back control" like hooligans do when their team's losing.

David throws his bat down in rage and Nigel starts taunting him. "Can't take it Davey, can you? Too afraid to lose?" David scrunches up his face until it's redder than the Labor party and goes: "I'm calling a referendum!"

Nigel's mouth drops open in surprise, then quickly contorts into triumph. "Bring it on," he says and sticks the Union-Jack-on -a-cocktail stick behind his ear just like Violet Beauregarde does with her gum in "Charlie and the Chocolate Factory."

When the vote happens a few episodes later, it's super gripping TV because you've no idea which way it's going to go. All I remember thinking is that regardless of whether David or Nigel wins, there's going to be some amount of drama ahead.

The first plot holes begin to emerge around the end of season one when both David and Nigel disappear. Their country is on the edge of an abyss because of their cricket game and they don't have a backbone between them to stick around? How credible is that?

But whatever. Maybe the actors had other commitments. It happens. Besides, I was actually pretty glad when Theresa came along in season two. It's not many political dramas that have a female lead.

And to be fair, season two does feature some pretty interesting psychology. For one, Theresa chooses to lead the country in a direction she fundamentally opposes.

Granted, it's a weird thing for a character to do but I was willing to give the writers the benefit of the doubt. Maybe she just really wants the job. Like, more than absolutely anything.

At first, things go OK. After egomaniacs David and Nigel abscond, the British people embrace Theresa as a refreshing alternative. A safe pair of hands.

And here I have to commend the writers for luring us into a false sense of security. I for one did not see those initial approval ratings going to her head like that. I remember gasping in surprise when she calls a general election in the finale of season two.

Season three opens with Theresa in bed smoking a cigarette and googling "Arlene Foster," "Good Friday Agreement" and "Who owns Northern Ireland?" A Polish cleaner comes in quietly to remove the empty whiskey bottles strewn under the bed.

And honestly, if you ask me, they should have wrapped up the show around there. Because beyond season three, Brexit is practically unwatchable.

After Theresa's election disaster, the show just falls to pieces. Maybe it was a case of writer's block but the whole "Northern Ireland" thing just comes out of nowhere.

As viewers, we're expected to believe that the UK's most seasoned lawmakers and commentators have no idea of the history of their own country and that of their neighbor, the Republic of Ireland.

It gets worse. Season four and five basically just feature Theresa bickering with Jean-Claude and Michel about something called a "backstop" which the writers don't even bother to explain.

There's not even any simmering romantic tension to distract from the tedium.

Things don't even get better after a deal is reached.

In fact, this season, Brexit really has hit rock bottom.

The writers, evidently completely burned out, have tumbled to the very bottom of the barrel where they scraped frantically and emerged with the "backstop." Again.

And hey, ho: suddenly this flimsy plot device is all lawmakers care about. Especially those only vaguely aware that the Republic of Ireland has been independent almost as long as their family's name has appeared in Burke's Peerage.

It's got to the point where the episodes just blur together into some version of the following:

Theresa begs Parliament to approve the deal she made with Jean-Claude and Michel after one too many cocktails courtesy of the European Commission (at the time, they teased her, accusing her of being a scrounger).

Parliament says "no way."  Theresa puts on her tough voice and facetimes Michel and Jean-Claude who are busy measuring the curvature of a Hungarian banana.

"You're right, it's leaning too far to the right," Jean-Claude says. "Oh hey, Theresa. Do you know what time it is?"

"No offense," says Michel. "But would you mind calling back? We're kind of busy."

So Theresa goes back to parliament and says: "Now do you like my deal?"

"The nays have it," says the speaker of the House.

"Fine," Theresa says, as visions of a glorious retirement flash before her eyes. "If you don't approve of my deal, do you even approve me?"

"The ayes have it!" says the speaker of the house.

And so it goes on. And on. Ad nauseum.

Let's be frank. Brexit is a drama that began with real promise. But like "Friends" did about three seasons in, it's run its course. Passed its peak. Exceeded its sell-by date.

For the sake of fans and critics around the world, it's time to face the truth. Brexit seemed like a great idea at the start. But having failed to deliver on its promise, the time has come to scrap the drama.

Not every show must go on.