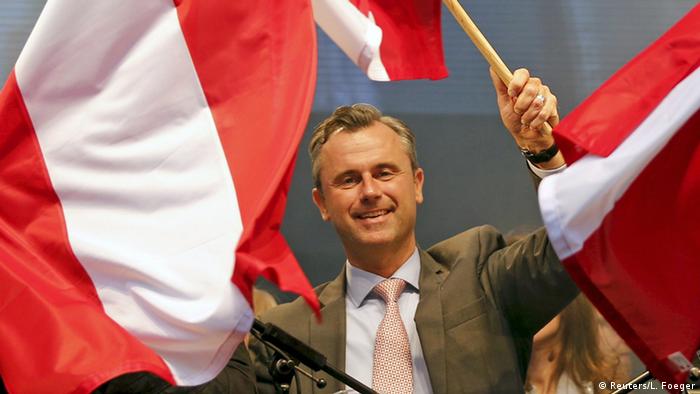 The results are a political upheaval of the most unpleasant kind: The unexpectedly huge success of Austria's Freedom Party (FPÖ) candidate Norbert Hofer in his country's presidential elections is a wake-up call for the rest of Europe. The president mostly has representative responsibilities; however, the position apparently encompasses unforeseen possibilities of intervention. Hofer has already threatened to dissolve the Social Democrat (SPÖ) and conservative People's Party (ÖVP) coalition government if he wins the second ballot at the end of May. According to opinion polls, his party is the greatest political force in Austria. That means that the Alpine nation may become the next EU country, after Hungary and Poland, to be ruled by a right-wing populist government.

Have the ruling Austrian parties abandoned their values?

Political pundits in Austria have criticized the poor performance of the traditional ruling parties and the resigned attitude towards the FPÖ, claiming that the conservatives and social democrats have abandoned their values. Austrian Chancellor Werner Faymann, once a key political ally of Angela Merkel on refugee policy, changed course on migration early this year, becoming one of the German chancellor's greatest opponents. Yet this change did little to increase his popular support. How could anyone fail to attack a candidate like Norbert Hofer with full force? Hofer is a former member of a fraternity with German nationalist views. How could he simply tiptoe around him?

And of course, how can a party refrain from putting its strongest candidate in the race? Instead, the two ruling parties obviously nominated people who were not particularly interested in the election. It was basically an act of political suicide in the face of defeat! In Vienna, politicians are regretfully watching their own demise. There may be a morbid charm to it, but it was a fatal political error. As events of the 20th century have shown us, it is difficult to push right-wing politicians out of positions of power.

All different, yet somehow all the same

"The Greater Romania Party" (RPM), "Our Slovakia" and "Jobbik" in Hungary point to the rise of radical right-wing parties, especially in Eastern Europe. At the same time, the political leanings of the FPÖ in Austria, France's Front National and the Danish People's Party have proven shockingly successful in countries with long democratic traditions. Particularly in Poland, where the "Law and Justice Party (PiS)" is in the process of dismantling democratic institutions and curtailing freedom of the press, thrusting the country into isolation in mere months, one can observe what happens when right-wing nationalists take power: They destroy democracy so they can preserve power. The new right-wing nationalist parties are different from each other, but their principles are similar.

We cannot idly stand by and watch this trend develop in Europe. Anyone who wants a different reality must urgently become active. Right-wing nationalist attitudes should not be tolerated. It is not acceptable to be anti-democratic, racist, nationalist, Islamophobic or xenophobic. One cannot express this often and clearly enough. The response to globalization and its undesired effects is not to withdraw behind one's national borders. Do Austria, Slovakia and Hungary actually aspire to single-handedly halt the power of the big banks or the rise of China? Such promises are absurd; this nonsense must be exposed and more importantly, better answers must come. And finally, the established political parties must start taking care of the losers of society again; a ticking political bomb lies in their dissatisfaction.

The desire to go back to the "good old days," as cultivated by right-wing parties, is nonsense. The good old days were not better; they were just the old days and probably not at all better than the present. That is why a strong information campaign is needed. The nostalgic desire for an apparently simpler world is understandable – who wouldn't dream of that? But our concern must be building a better future as only phantoms live in the past. Right-wing nationalists have a penchant for falsifying history, as one can see in Poland today. The challenge for all democrats in Europe with regard to these developments is clear: do not become a deer caught in the headlights of right-wing populism - get active and join the debate!

Have something to say? Add your comments below. The thread stays open for 24 hours after publication.