After the night of terror in Paris, "Islamic State" has claimed responsibility for the attacks that cost more than 120 lives. Not only France, but Europe must now take action, DW's Alexander Kudascheff writes. 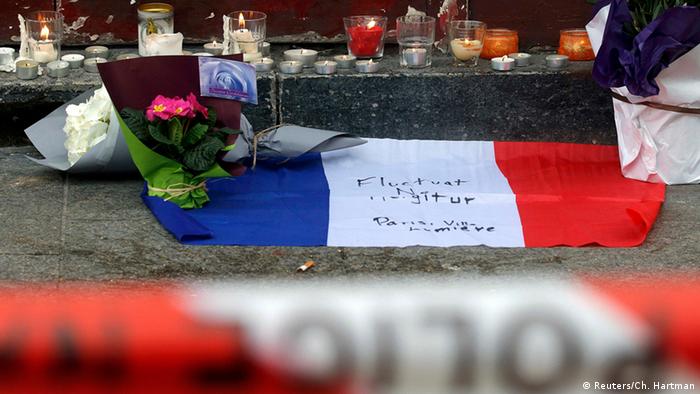 November 13, 2015, is a day that will surely live in infamy. It was a black Friday for France, for Europe, for the West.

This unsettles us Europeans, because today, the day after, we feel fraternally connected to France as never before. We are touched, depressed and enraged. Enraged by "IS"' brutal bloodlust, which claimed the lives of more than 120 people, not to mention the many who were injured.

The attack was a knife wound in the heart of Europeans. It wounded our understanding of ourselves, and how we want to live. The terror was a murderous stab against the French state, which could not protect its citizens, despite its new and extensive monitoring capabilities.

The killings were also an attack on the political landscape of France. A slide to right-wing or ultra-right positions is now certain. France will isolate itself, and will make plans to withdraw from globalization. The political winner of the nightmare of November 13 will be the National Front in France. And the hapless and unpopular President Francois Hollande will be the main loser.

This "Black Friday" will change Europe, even though no one yet knows where the "IS" assassins came from. Were they from the banlieues? From the suburbs of French cities, where parallel societies of rootless young people with a Muslim background have long been a reality, where - as a book by the Algerian writer Sansal describes it - "men with long beards call the shots" and the rejection of the French and Western lifestyle is total?

Or did the terrorists come from Syria or Iraq, either as returning fighters or posing as refugees? This would only add fuel to the fire of the European, and especially the German, debate on migration.

Friday, November 13 was a day of powerlessness. It will remain a day that hangs like a nightmare over the French and the Europeans. A day of dejection, helplessness, and probably also aimless rage.

There can be no other response to "IS' "declaration of war against the West - and not just the West.

Unfortunately, DW is unable to accept comments at this time.

Paris – the day after

The attacks in Paris have stunned residents of the city, normally known for its carefree lifestyle. But they are going on with their normal activities despite the horror, DW's Andy Valvur reports from the French capital. (14.11.2015)

President Hollande has accused "Islamic State" of being behind Friday's attack in Paris. The rampage that claimed at least 127 lives was an "act of war," the French president said. (14.11.2015)

US sends unofficial delegation to Taiwan, angering China 3h ago

Germany and UK to follow US out of Afghanistan 5h ago

Görlach Global: Who will hold Beijing in check? 4h ago