It's the wedding of the year in the classical music world: on Tuesday, 44-year-old star soprano Anna Netrebko and her finance, Azerbaijani tenor Yusif Eyvazov, said "I do" at the Palais Coburg in Vienna. 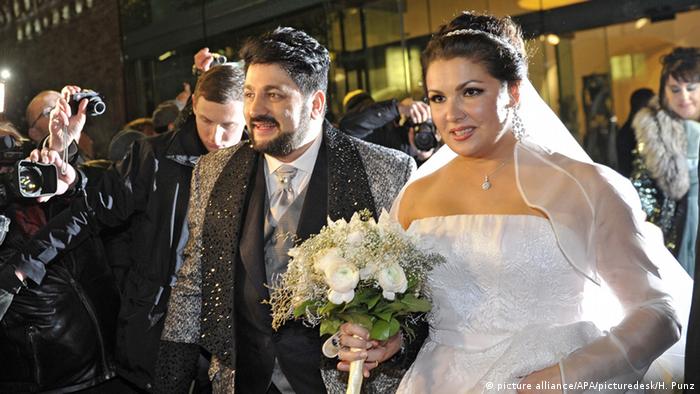 The ceremony took place in a small circle of friends and family including Netrebko's father Yury and her sister, Natalia.

The wedding was held in royal style at Vienna's sumptuous Palais Coburg, with Netrebko decked out in an 18-carat white gold and diamond tiara resembling the one worn by Kate Middleton at her wedding to England's Prince William in 2011. Estimated value: 1 million euros ($1.09 million).

Following the official ceremony, the couple took a carriage ride through Vienna's inner city and on to Liechtenstein Palace, where fireworks were due to welcome the 180 guests, including tenor star Placido Domingo.

The dinner and celebration in the Hercules Hall were planned to last until the early morning hours.

Netrebko, a resident and citizen of Austria, met Eyvazov in 2014 in Rome. The couple had initially considered marrying in St. Petersburg, but Eyvazov, six years Netrebko's junior, told the Austrian magazine "News" that they had decided that Vienna would be the right place for a romantic wedding.

Russian soprano Anna Netrebko has ruffled feathers after being photographed with the flag of pro-Russian Ukrainian separatists and making a donation to the opera house in Donetsk. (10.12.2014)