Opera singer is (soprano) voice of Portugal′s protests | World| Breaking news and perspectives from around the globe | DW | 14.08.2013

In Portugal, an opera singer has taken to showing up at the president's meetings and drowning him out in song. She's become the new face - and voice - of her country's anti-austerity protests. 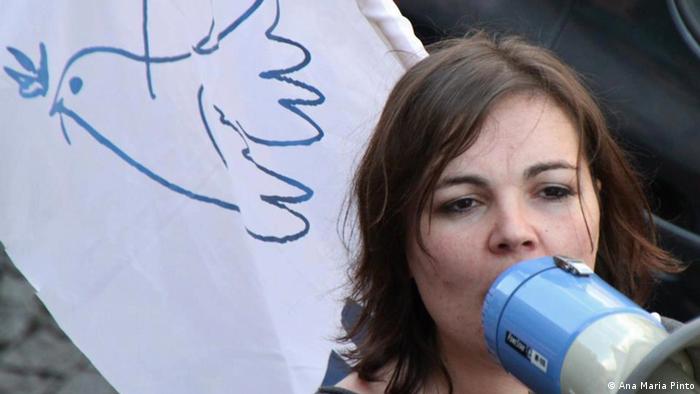 A classically-trained soprano, Ana Maria Pinto recently returned to her native Portugal after seven years studying opera in Berlin. Her anger was mounting, as budget cuts and tax hikes left her country poorer and poorer. She could stand by and watch no longer. She was determined to break out of the rarified world of classical music, and join her countrymen protesting in the street.

But what could she contribute? Her voice.

Last October 5, Pinto made her way to an 18th century courtyard near the Tagus River in Lisbon, where Portuguese President Anibal Cavaco Silva was speaking at a private ceremony for Republic Day, a national holiday. Pinto waited outside patiently. Then, near the end of the president's speech, security guards opened up the gates - and the singer rushed in, belting out a song.

"You could see on their faces that they were really confused! Because I was singing opera!" an amused Pinto, 32, recalled during a recent interview in Lisbon. "At the end [some of the dignitaries] asked me, 'Is this part of the event?' And I said, 'No, this is my protest!'"

Security guards whisked away the president. But from that day on, Ana Maria Pinto has been a household name in Portugal. She's the new face - and voice - of the country's protest movement.

"I wanted to speak to the Portuguese and sing for them. Just do it! Have the courage to have your own voice!" Pinto said, smiling. Since then she's become a fixture at street demonstrations, leading choirs of regular folks venting their anger over Portugal's economy. She has also founded the Intervention Choir of Porto, in her hometown in Portugal's north. It's a choir that rehearses every Saturday, and performs at street protests nationwide. Its mission is to advance the spirit of the protest Pinto carried out by interrupting the president last October, using music as a tool for non-violent resistance.

While anti-austerity protesters throw Molotov cocktails in the streets of Athens, or blockade parliament in Madrid, their Portuguese counterparts are singing songs in the street, 1960s-style.

"The Portuguese people are not violent - and that's not because we are weak. It's a different nature," Pinto said, sipping coffee at Martinho do Arcada, a downtown Lisbon café that's been a hangout for Portuguese poets and revolutionaries for 230 years.

Portugal's anger over austerity is more melancholy, less fiery, than other southern Europeans. And part of the reason for that is history, said economic historian Pedro Lains, who teaches at the University of Lisbon. 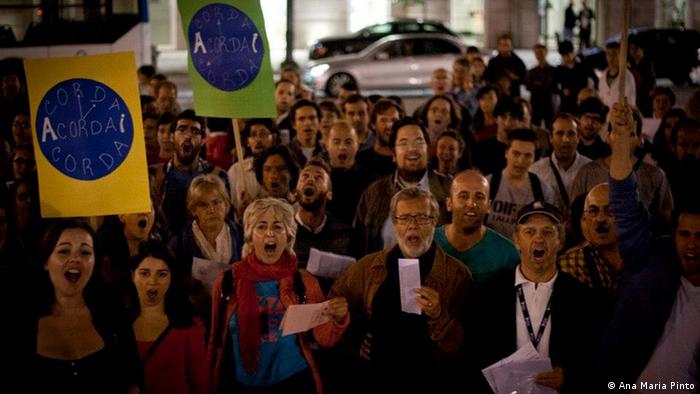 Some Portuguese protesters take inspiration from their country's 1974 Carnation Revolution, a peaceful military coup that ended Portugal's dictatorship and led to a withdrawal from its African colonies. At the time, ordinary citizens flooded the streets and inserted carnation flowers into the muzzles of soldiers' rifles. Carnations are still common at anti-austerity protests in Lisbon today.

Among the songs Pinto has made popular at such protests is "Acordai" - which means, 'Wake Up!' in Portuguese. It's a ballad written by the late Fernando Lopes-Graca, a 20th-century Portuguese composer and Communist Party member, who used music to campaign against fascism.

The song Pinto belted out at the president during his Republic Day speech last fall was another of Lopes-Gracas anti-fascist folk songs, "Firmeza."

"[It means] firm - a person who is steady," Pinto said, translating the lyrics from Portuguese. "It talks about being yourself and not allowing someone who is above you, to abuse [you.]" 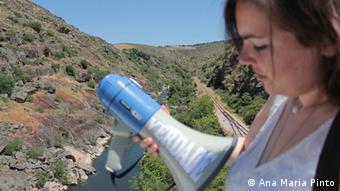 It's that sentiment that motivated Pinto to buy her own megaphone. She's etched the word "truth" on one side, and painted the image of a dove, symbolizing peace, on the other.

"I'm just a normal citizen," she said. "I just have this strong instinct of protecting what I love, and I do deeply love my country."

Portugal's unemployment rate is approaching a record 18 percent, and poverty is rising. For some citizens, their tax burden has doubled. Charities warn that austerity measures are having a disproportionate affect on the sick and elderly, for whom the cost of health care has gone up.

For her next project, Pinto wants to bring music to some of Portugal's poorest rural villages, virtually cut off by cuts to municipal arts budgets, public transport and healthcare.

"Whenever I have time off from performing, I go to rural inland Portugal to the old villages and the old people, where everything is very genuine," Pinto said. "But now the way the old people are being treated, it's cruel. It's just not right. I'm concerned a lot about that."

Reflecting on how her fame has spread from Portugal's opera houses to its streets, Pinto said she feels confident about the future. The movement she started last October, by interrupting the president, is growing.

"A lot has happened since then. But I don't know, I think I feel some peace now," she said, smiling. "Somehow I can see a bit of light there, at the end. It feels good."

Portugal: A bitter pill too far?

Portugal was seen as a model for Europe. It accepted its bitter austerity medicine with good grace, but as political and financial crises return, commentators are now asking whether perhaps it went too far, too fast? (04.07.2013)

Portugal's pensioners take to the barricades

Austerity measures proposed by the Portuguese government would hit pensioners hard if they go into effect. But rather than setting off a generational conflict, they are uniting protesters against the cuts. (25.05.2013)

Europe vs the IMF: Austerity vs growth?

Over the last two decades, the trade-offs between more rapid economic growth and the need for government austerity has been a topic of worldwide debate. The issue is rearing its head again, writes Elliott Morss. (08.05.2013)