On tour with Spain′s anti-corruption bus | Europe| News and current affairs from around the continent | DW | 22.04.2017

On tour with Spain's anti-corruption bus

An anti-corruption bus is the latest media strategy of the Spanish opposition party Podemos to highlight the country's ongoing corruption problems. Hagar Jobse went along for a ride in Madrid. 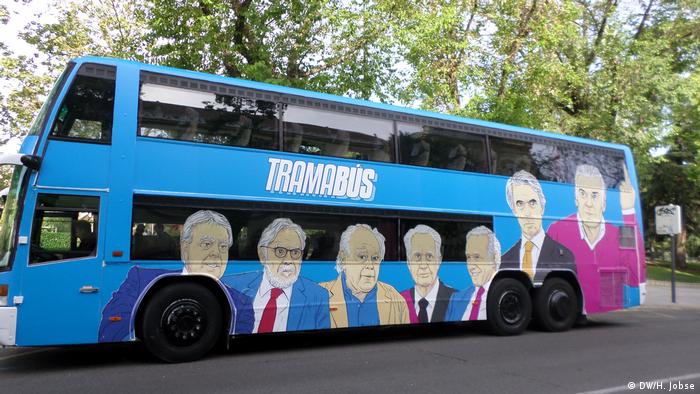 "On our left, we have one of the most iconic places of this corruption tour." Miguel Urbán, who represents the Spanish left-wing party Podemos in the European Parliament is sitting at the front of the bus, describing the stops along the way. The bus passes the headquarters of the governing party Partido Popular (PP). "The Partido Popular is no longer a political party," Urbán continues. "It's a gang whose only goal is to plunder public money."

For the third day in a row, the so-called Tramabus, ("racket bus"), is making its way through the streets of Madrid. The vehicle is blue, just like the political color of the Partido Popular, and is illustrated with the faces of allegedly corrupt politicians and bankers. The Tramabus is Podemos' latest media strategy and is aimed at naming and shaming the people involved in the corruption racket that according to the opposition party has a grip on Spanish politics. The faces on the bus include former PP treasurer Luis Barcenas, PP ex-President José Maria Aznar and former International Monetary Fund managing director, Rodrigo Rato.

Corruption is a serious problem in Spain, and according to several polls it is what Spaniards are most concerned about after unemployment. Indeed, numerous corruption scandals have dominated coverage in the Spanish press over the past few years. The ongoing so-called Gürtel case [a cryptic reference to one of the principal suspects, Francisco Correa. Correa means belt in Spanish, Gürtel in German - the ed.] has seriously damaged the image of the Partido Popular with several PP politicians and businessmen accused of bribery, money laundering and tax evasion. The Spanish state has allegedly lost millions of euros as a result of the network's practices. In 2013 it was revealed that for years, former PP-treasurer Luis Barcenas had transferred illegal party donations to a bank account in Switzerland and used the money to pay bonuses to certain party members. A year after that, 52 public officials and business leaders were arrested during the so-called Operation Púnica. They were part of a corruption network that involved contracts worth roughly 250 million euros ($267 million). Among them were also several PP officials. 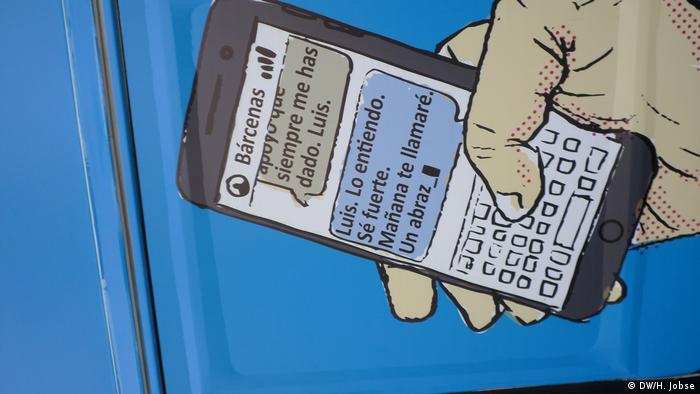 An image on the bus of Prime Minister Rajoy texting former PP treasurer Luis Barcenas, who's accused of corruption

While the bus drives past different locations that are in some way connected to corruption in the country, Podemos politicians inform the passengers about corruption in Spain. Earlier in the week Podemos leader Pablo Iglesias acted as a "corruption tour guide" on the bus.

The party couldn't have chosen a better week to launch the bus.  After a relatively quiet two-year period, things appear to be moving quickly once again. On Tuesday Prime Minister Rajoy was summoned by the National Court to testify as a witness at the Gürtel trial. Moreover, just before the bus hit the road on Wednesday, the former premier of the region of Madrid, Ignacio Gonzalez, was arrested in a raid against corruption at the regional water management corporation Canal Isabel II.

"The Partido Popular has transformed public institutions into a haven for criminals," shouts Idoia Villanueva, Podemos senator for the Navarra region, from the front of the bus as it passes the publicly owned Canal de Isabel Segunda, which covers the water needs of the inhabitants of Madrid and its surroundings. The aforementioned Ignacio Gonzalez was in charge of the Canal until 2015. 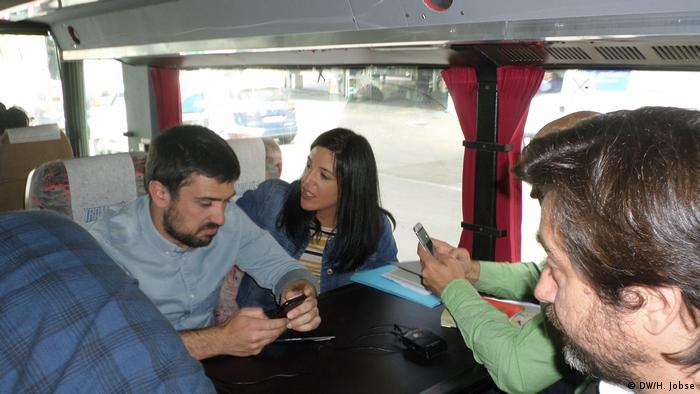 Politicians from both the PP as well as from Spain's Socialist party, PSOE, have criticized the use of the bus. The latter accuses Podemos of putting the image of corrupt politicians like Luis Bárcenas alongside people they simply don't agree with or like. "It disgusts me that Podemos connects corrupt right-wing politicians in Spain with Felipe Gónzalez," said PSOE's Pedro Sánchez about the fact that former PSOE leader Felipe Gonzalez is also depicted on the bus. But Idoia Villanueva defends what some might describe as a tenuous link. "Felipe Gonzalez has privatized many public companies and institutions and then put friends of his in charge there. That's an indirect form of corruption."

By naming and shaming corruption in Spain, Podemos hopes to raise more awareness. "There is so much corruption in this country that people aren't even shocked by it anymore," Miguel Úrban explains. "They end up accepting it. We don't want that to happen. That's why it's important we keep denouncing corruption cases and naming the people involved."

The Tramabus will be touring around Spain over the following weeks to highlight its campaign. "There is new information released on corruption in this country almost every day now. So we don't plan ahead. If there is big corruption revealed in Valencia next week, we will go there," says Villanueva.