​​​​​​​On the Lemon Trail: Sustainability on the Amalfi coast

As the Amalfi coast awaits the return of foreigners, not everybody wants to go back to how things were. Residents and businesses are urging to steer tourism in a more socially and environmentally sustainable direction. 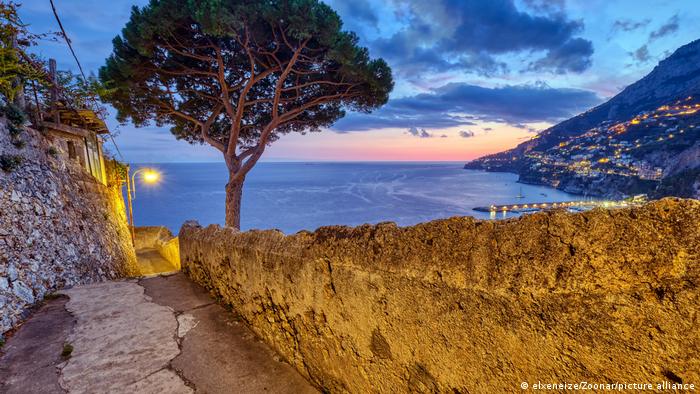 I'm walking under a lemon-covered pergola, stretching as far as the eye can see. The smell of citrus fills the air; it's almost harvest season, and the plump, golden fruits are dangling heavily above my head. Gaps in the foliage reveal the intense blue of the Tyrrhenian Sea below.

Somewhere along the "Sentiero dei Limoni" (Path of Lemons), a scenic trail connecting the towns of Minori and Maiori on the Amalfi coast, I followed a sign. It promised lemon-themed refreshments to short-breathed passersby like myself, braving the hike on this unforgivingly hot, late-June afternoon. That's how I ended up sipping freshly squeezed lemonade in Giovanni Ruocco's orchard. 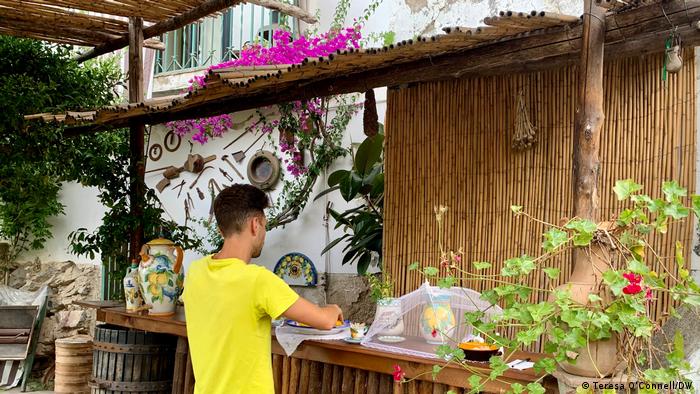 The sign hasn't brought in much custom today. "It's been quiet," says Giovanni, as he thinly slices a freshly-picked fruit for a salad. He has been growing and picking lemons since he was a child. "We see people at the weekends, but it's nothing compared to before the pandemic. We can really feel the absence of foreigners, especially the Russians and Americans."

Despite the government announcing Italy would be opening up for tourism in mid-May, at the start of the high summer season, international travellers are slow to return.

An industry brought to its knees

Along the seafront in Minori, restaurateurs pace up and down half-empty seating areas. with expectant looks on their faces. Italy has just become "white," and many coronavirus measures, including wearing masks outdoors, have been eased. But the staycations that this is likely to attract in the short term won’t be enough to give the suffering industry the boost it needs.

According to the Italian National Institute for Statistics (ISTAT), the Campania region recorded a 72.2% drop in tourism in 2020. The figure is likely to have been as high as 85% on the Amalfi coast, where foreign tourists made up 80% of visitors to the area before the pandemic. They tend to be the biggest spenders. 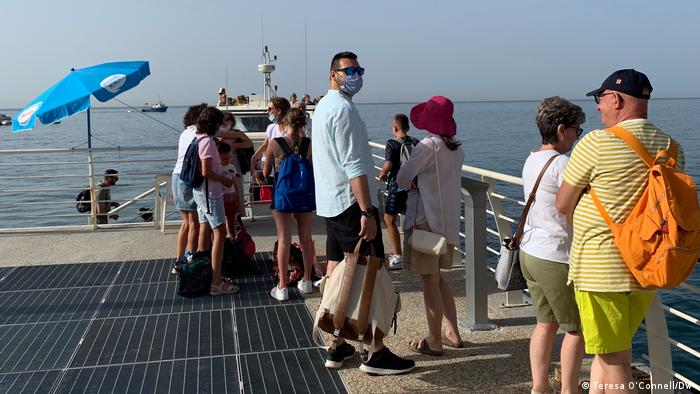 The short waiting line for the usually packed ferry to Positano

The impact of tourism on the local economy cannot be exaggerated. "Even jobs which may not seem directly connected usually provide services to people or businesses who work with tourists," say members of Collettivo UANM, a collective founded a year and a half ago in Praiano to discuss the cultural, social and environmental issues affecting the Amalfi coast. "We live and breathe tourism, "they continue," and that's our problem. With coronavirus, we realised that if something goes wrong, we're in trouble."

The urgent need for change

Yet going back to how things were, Collettivo UANM members believe, is not a viable option. In the years before the pandemic, steadily growing tourism numbers brought the local environment, infrastructure and population under unsustainable pressure. Italy's statistics institute ISTAT reports that in 2018, the area between Maiori and Positano — with a total population of 25,000 inhabitants — recorded close to 1.5 million official presences. The peak was in the town of Praiano, with 96 visitors for each resident. "As a result," Collettivo UANM members continue, "the sewers stop working, the sea is dirty, traffic keeps growing, and it's become impossible for young people to find affordable housing." 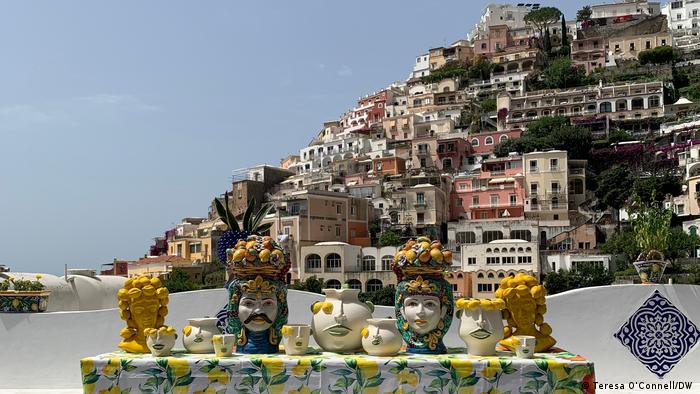 Lemon art on display in Positano

In the postcard village of Positano, where sun-bleached peach and terracotta houses plunge into the turquoise sea, it's easy to understand what they mean. By mid-morning, the main beach has filled up, and noisy scooters are zigzagging between the cars congesting the boutique-lined road. Taking the steep steps that criss-cross the town is one way of avoiding the crowds; I follow the cliffside path to the more laid-back Spiaggia del Fornillo, where I find space to swim whilst I wait for my ferry.

"We've reached the limit," Collettivo UANM members continue. "It's become obvious that though tourism is a matter of pride, the attitude we've had up to now, seeking to attract more and more tourists, is not such a good thing, if we look at the present, but especially the future. If it's not sustainable for us, how can we have anything to offer tourists?"

Founded in 2014, Distretto Costa di Amalfi is an organization committed to "finding solutions that ease the impact of tourism on the environment and improve quality of life for residents," says president Andrea Ferraioli. In 2020 it launched a website, Authentic Amalfi Coast, which showcases the lesser-known sides of the region, including food and wine, crafts, and attractions of the inland towns, using storytelling as a means to raise awareness of the Amalfi area beyond the coast. 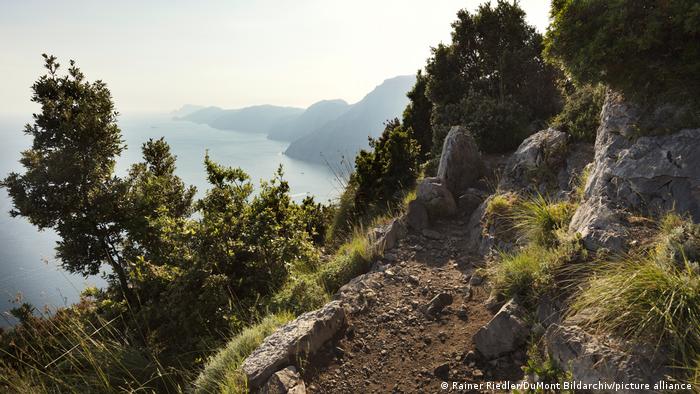 Hiking along the coastline on the "Sentiero degli Dei"

In the mountain town of Agerola, 600 metres (1968.5 ft) above sea level and the starting point of the Sentiero Degli Dei (Path of the Gods), another panoramic trail following ancient mule routes descending into Positano, Valentina Sannino has worked as an eco-tour guide for the past ten years. She has witnessed a growing interest in experiencing the Amalfi coast not only in terms of luxury and comfort, but also of nature and discovery. "It's given some of us the opportunity to turn a passion into a business."

"People are increasingly after authentic experiences," she says, "such as visiting a lemon grove, or a shepherd who makes their own cheese. We're hoping the pandemic will give a boost to this slower, less crowded form of tourism, which is much more responsible and sustainable."

Of course, it may not appeal to everyone. "It's important that different forms of tourism exist alongside one another, including one that is supportive of local, independent businesses and not just of big entrepreneurs who may not even live in this area." 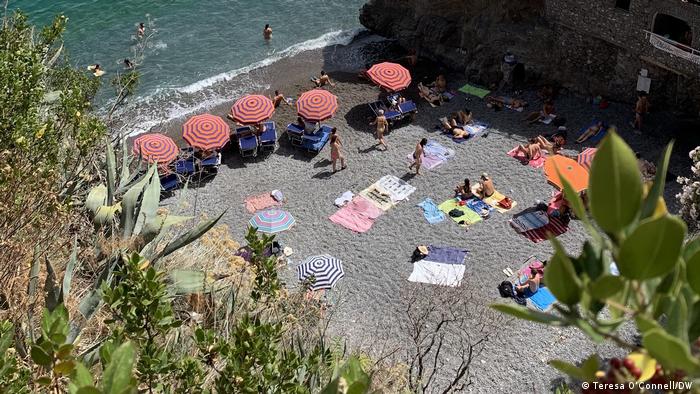 Peace in Positano: a hidden beach where I could relax and swim

Valentina is confident that the key to growing this kind of tourism is communication. "It's really important," she says, "because people often don't know about the existence of these activities that support and promote the local territory in this way. Often all they know about is the more glamorous side of the Amalfi coast — the one made famous by Grace Kelly, Sophia Lauren, and Rudolf Nureyev."

A tile in the stone wall marks the 398th step. Before I start my descent into Maiori, announced by the scooters whizzing along the busy seafront, I pause and look back. I can see why this place has been a favourite of film icons and artists throughout the ages, and feel privileged to have seen it from this point of view. A lemon has fallen to the ground. I'll be taking it with me when I leave tomorrow, to remind me of the connections I've made along the way. 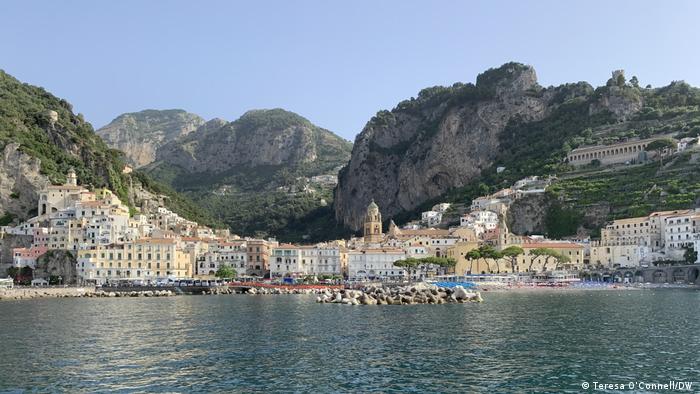 Amalfi - the town that gives the area its name

The hospitality sector in Europe is breathing a sigh of relief. As COVID incidence rates fall, restrictions are being relaxed, making tourism possible again. DW Travel offers a brief recap of what rules apply in the EU.