On Dresden Anniversary, Massive Protest Against Neo-Nazi March | Germany| News and in-depth reporting from Berlin and beyond | DW | 14.02.2009

Thousands turned out in central Dresden to protest a march by far-right supporters on the 64th anniversary of the Allied firebombing of the city. Police clashed with left-wing protestors, who threw stones and bottles. 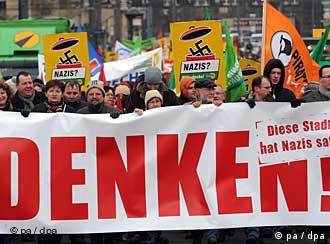 Demonstrators protesting a neo-Nazi March in Dresden on Saturday

Organizers of the alliance that formed as a counterweight to the neo-Nazi march through the eastern German city said around 11,000 people participated at several demonstrations. Police put that number at just under 10,000. 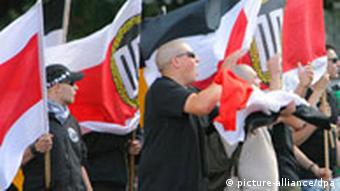 The far-right uses Dresden as a rallying cry

They were protesting a "mourning march" held by members of the extreme-right in the capital of the state of Saxony. For a decade, anti-immigrant and skinhead groups have marked the anniversary of the bombing of Dresden by Allied air raids, which took place Feb. 13-15, 1945, at the end of World War Two.

Many of the groups marching were affiliated with the National Democratic Party (NPD), a far-right political party which entered the Saxony state assembly in 2004.

This year’s event was organized by a group known as the Junge Landsmannschaft Ostdeutschland, supported by the NPD. The far-right marchers totaled around 6,000, according to police, about a thousand more than gathered in 2005, on the 60th anniversary of the bombing.

Many in the far-right scene call the widespread destruction in Dresden a "Holocaust," and attempt to paint Germany as a victim of the war. The firebombing killed an estimated 25,000 people, mostly civilians, and wiped out the city center. 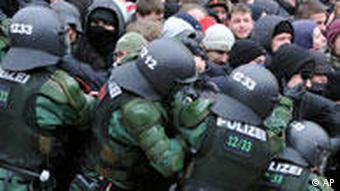 Eyewitnesses on Saturday said several hundred leftists who objected to the far-right procession tried to attack neo-Nazi participants, hurling bottles at the police cordon and damaging parked cars. Witnesses said several people were injured, although police have not confirmed this.

Clashes between left-wing and far-right groups are common on the anniversary. This year, police forces numbered around 4,000, some brought in from neighboring states.

Separately, thousands of pacifists took part in processions to both denounce the neo-Nazi threat and remember the city's dead.

On Saturday morning, peace services were held in churches and a synagogue. Afterwards, thousands of Dresden residents went to a central square, the site where numerous victims of the bombing were burned to death. 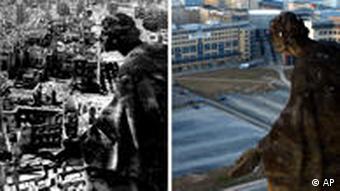 Dresden after the firebombing and today

Also participating in the commemorations were politicians from Dresden and Saxony as well as representatives from the United States and Great Britain.

Many mainstream Germans say that the huge loss of life must be remembered as a warning against war.

On Friday, the bell of the Frauenkirche, or Church of Our Lady, rang out in their memory. The church, one of the symbols of Dresden, collapsed two days after the raids. It remained a pile of rubble for decades until US and British donors helped pay to rebuild it in a gesture of reconciliation. It reopened in 2006.