Germany's general manager has conceded that the DFB could have handled the affair surrounding two players of Turkish origin better. Oliver Bierhoff said that they may have underestimated the effect of the problem. 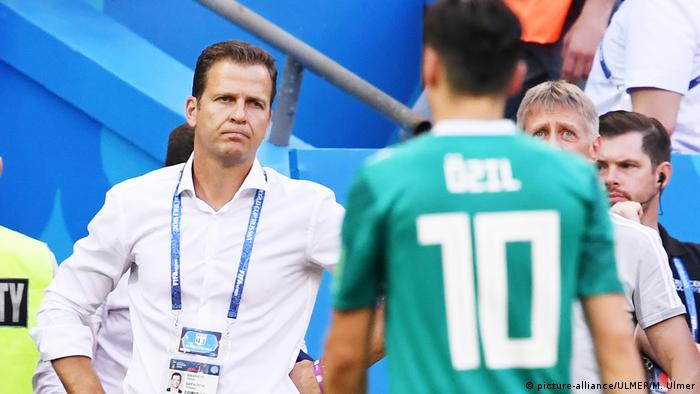 In an interview published in the Friday edition of the national broadsheet Welt, German national team GM Olivier Bierhoff admitted that he and his staff at the German Football Association (DFB) had failed to contain the controversy surrounding Mesut Özil and Ilkay Gündogan prior to the football World Cup.

The two German-born players of Turkish descent met and were photographed alongside Turkish President Recep Tayyip Erdogan in London just two days before national team coach Joachim Löw was to unveil his provisional squad for the World Cup in Russia. Most disturbing to some, was that the signed Manchester City jersey presented by Gündogan to Erdogan included the words: "With great respect for my president." It also came as Erdogan was running for re-election, and his AK party was quick to get photos of the meeting out on social media.

In light of the backlash that quickly followed, Gündogan issued a statement in which he stressed that his loyalties were with the German national team.

"It was not our intention to make a political statement with our photo, and even less so to campaign for his election. As Germany internationals, we are committed to the values of the DFB and are aware of our responsibilities," he said.

He later used an interview with Germany's ARD public television to try to smoothe things over. Özil on the other hand, still hasn't commented on the meeting, and both players were jeered by some German fans at two pre-World Cup friendlies. Both were part of the German team that was eliminated from the World Cup at the group stage.

In Friday's Welt interview, Bierhoff said that then DFB could have done things better. He said that a number of players had said that they believed the DFB had underestimated the impact of the affair.

"I believe that the team wasn't so bothered about the fact that Mesut and Ilkay were in the photos. But the (media) debate just wouldn't stop. In hindsight, I would have tried to deal with this issue in a more decisive manner," he said.

Bierhoff also said that while DFB officials had spoken with both players, it had "never forced any national team player to do anything," instead choosing to try to convince them of the wisdom of a desired action.

Özil never offered an explanation, and was even allowed to skip the otherwise compulsory media day at the pre-World Cup training camp in Austria. In the Welt interview, Bierhoff said that as a result, he and his staff should have seriously considered leaving him out of the final squad for Russia.

At the same time, he noted that Gündogan had also been jeered by some fans, despite his efforts to explain himself.

Following Germany’s shock World Cup exit, the country’s referee Felix Brych is also heading home early. The 42-year-old was criticized by Serbia over his performance in their defeat to Switzerland. (05.07.2018)

Joachim Löw has decided to carry on as head coach of Germany. Löw had received a vote of confidence from the German FA despite the defending World Cup champions being knocked out at the group stage. (03.07.2018)

German President Frank-Walter Steinmeier met with two German football players with Turkish roots who have been at the center of a political row for posing for pictures with Turkish President Recep Tayyip Erdogan. (20.05.2018)

Ilkay Gündogan and Robert Lewandowski are among those who could miss upcoming international matches due to Coronavirus regulations. South American qualifiers have been postponed, but that seems unlikely in Europe.