Oleg Sentsov, the Ukrainian filmmaker on a hunger strike in a Russian prison, debuted with a film that was shown at prestigious international festivals. 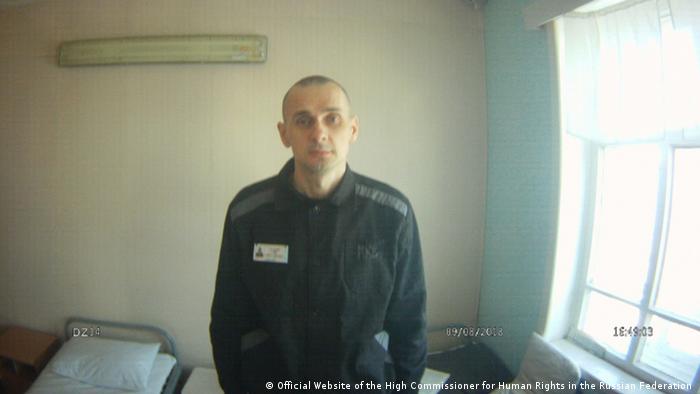 "Gamer" was Sentsov's first feature film as director and screenwriter following two short films made a few years earlier. Released in 2011 in Russian and Ukrainian, "Gamer" tells the story of a young gamer who lives with his mother in Simferepol, a city on the Crimean peninsula. The movie premiered in Rotterdam to much praise in 2012 and also showed at several other international film festivals.

Sentsov started his next film, "Rhino," in 2013 but never finished as he took time off to join the Euromaidan movement protests in Ukraine.

The Ukrainian artist also wrote and published short stories in Russian, translated into English and published by Pen International in June along with an appeal for his immediate release. The international association of writers repeated that urgent demand:

"I was born in Friday the 13th," begins the short story titled "Autobiography." "I guess that's why I've had such a fun life."

In "Testament", published first in Russian in 2015, the man who has dwindled after almost three months of refusing to eat, mused about death: "We are all going to die. Each in our own way."

In the third story, "Dog", he reminisced about his childhood pet.

In May, several literature Nobel laureates and directors including Germany's Herta Müller and Belarusian writer and Nobel Literature Prize winner Svetlana Alexievich urged German Chancellor Angela Merkel and the German foreign minister in a letter "not to turn a blind eye to this difficult situation."

Oleg Sentsov, they wrote, "can not become a casualty of Russia's political judiciary."

Iranian film director Mohsen Makhmalbaf, the winner of this year's prestigious Robert Bresson Award at the Venice Film Festival, dedicated the prize to Oleg Sentsov, saying that "nothing but wishing for the freedom of people of his country has brought Oleg Sentsov a brutal 20 years imprisonment."

"Oleg Sentsov should make new films, not count years in prison," he said.

Others who have petitioned on behalf of the Ukrainian filmmaker include the Toronto Film Festival and the European Film Academy.

Accused of a terrorist plot, Sentsov was arrested by Russian security forces after Moscow forcibly annexed Crimea in 2014, taken to Russia and sentenced to 20 years in prison. Sentsov has urged the release of other jailed Ukrainians. He has been on a hunger strike since mid-May.

Vladimir Putin has spoken with Petro Poroshenko about a possible prisoner swap. Several Ukrainian prisoners in Russia are on a hunger strike, including film director Oleg Sentsov, who is serving a 20-year sentence. (09.06.2018)

Opinion: Sentsov lost in court, but he's no loser

A Russian court has sentenced Ukrainian filmmaker Oleg Sentsov to 20 years in prison on terrorism charges. DW's Juri Rescheto says that if the court meant to instill fear in Russians, it missed the mark. (25.08.2015)