OECD warns of widening income gap between rich and poor | Europe| News and current affairs from around the continent | DW | 16.05.2013

A new OECD report shows the global economic and financial crisis has aggravated social inequality. The organization warns austerity measures could increase the problem even further. 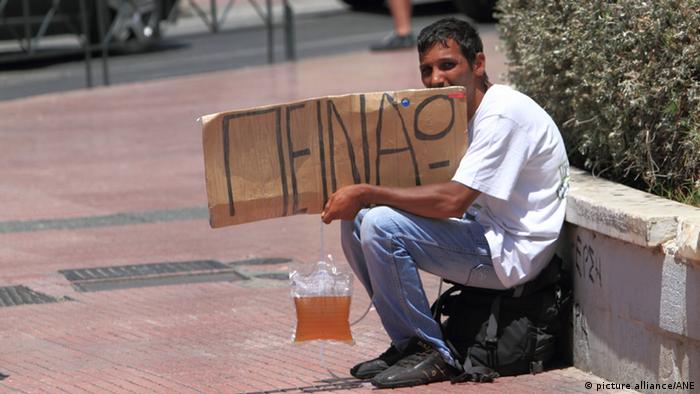 The widening of the gap between rich and poor did not begin with the crisis. According to a study released by the Organization for Economic Cooperation and Development (OECD), however, the crisis fueled the development. Income inequality has increased faster between 2008 and 2010 than at any time during the previous 12 years - at least in most countries, OECD expert Michael Förster told DW.

Germany is one of the exceptions. Differences in income are less pronounced than on average in OECD states. During the first three years of the crisis, gross income for big, medium and low income earners increased, although marginally, Förster says - the reason being trade union restraint in bargaining negotiations.

Germany as an example

"From 2000 to 2005, that is: in the years before the crisis, Germany experienced an extreme rise in wage differentials, with a surge in low income jobs that didn't have social insurance," the analyst says. "That development peaked in 2005/2006 and jobs created since then are for the most part regular jobs requiring social security contributions."

As an export-oriented nation, Germany also benefitted from the weak euro, Förster says, adding that it allowed many companies to offer their goods at a lower price than global competitors. 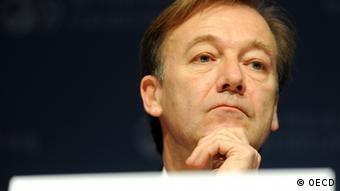 Poverty does exist in Germany, however: according to the OECD study, about nine percent of Germans were poor in 2010, positioning Germany below the OECD average of 11 percent living in poverty.

But what exactly is poverty? Studies usually define poverty by a certain level of income - people below that threshold are considered poor. The OECD indicator uses a relative poverty measure: it is based on an individual country's average income - which constantly changes and in turn influences the poverty threshold.

In line with this definition, the percentage of poor people rose only slightly in OECD member countries during the crisis years.

But looking at absolute poverty rates is much more significant, Förster says. To measure absolute poverty, experts determine a country's average income in a given year - in this case 2005 - as the poverty threshold and check what percentage of the population slipped below that level during the years of crisis. The study found Italy, Spain and Greece - all highly indebted countries whose populations are grappling with strict austerity measures - were especially hard hit. 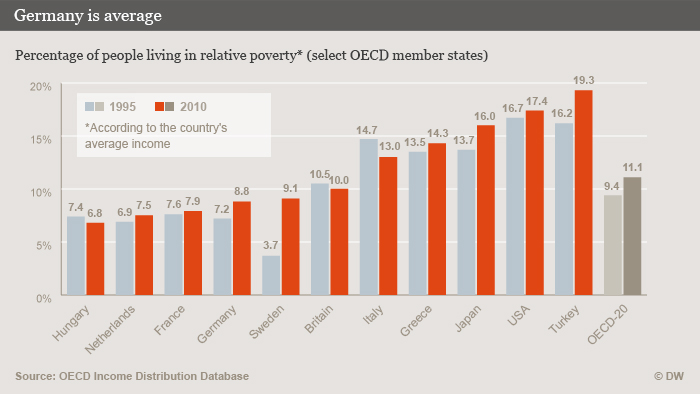 Mainly young people, in particular in the aforementioned countries, are plagued by financial worries, Förster says. He adds that, again, Germany is an exception because most young Germans managed to find employment. Young people and families in most other European countries lost a good part of their income, Förster says. By comparison, people over the age of 60 lost less.

The OECD expert is convinced education is a key to solving the poverty issue. A highly educated population is a guarantor for making sure the gap between high and low incomes does not widen too much. Christoph Schröder of the Cologne Institute for Economic Research (IW) agrees, and points out an additional necessity: more child day care centers to allow in particular single parents to more easily combine work and family.

Both experts conclude increased social benefits are not the solution to lead people out of poverty and close the gap between rich and poor. Welfare systems might have been able to absorb some losses as the crisis began to unfold, Förster says. But now, he adds, it is time for politics to get involved, by taking a critical look at existing cuts in public expenditure. The gap between rich and poor must not be allowed to widen, he warns, and above all, belt-tightening measures should not come at the expense of the poorest people.

Germany has so far done a good job in maneuvering through the financial crisis. And the country's labor market also appears to be in good shape. But it's deeply split, claims German sociologist Christoph Köhler. (01.05.2013)

For a long time, Greek political parties have resisted to overhaul their civil service strucutre. Now, parliament has agreed to a massive reform: 15,000 civil servants are to be laid off by the end of 2014. (03.05.2013)

The Rise of Poverty

Dispute over Aid - do food banks harm the poor?