India's ruling Congress Party is expected to take a beating at the polls, as the world's biggest election gets underway. The opposition BJP is set to do well, despite its polarizing candidate, says expert Milan Vaishnav. 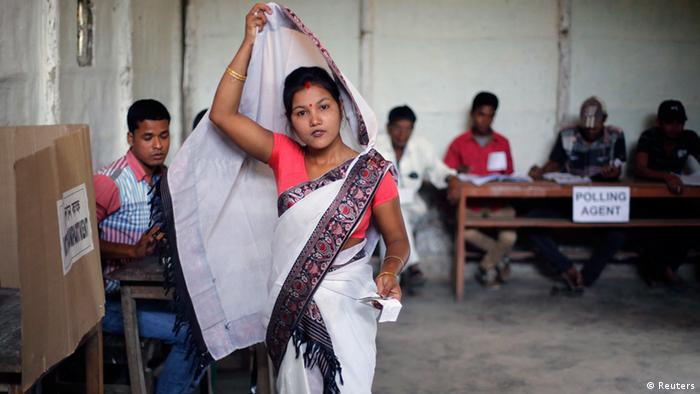 Voting began on Monday, April 7, in the northeastern states of Assam and Tripura. The polls - regarded as the world's biggest democratic exercise ever - are set be held in nine stages over the course of the coming five weeks. Some 815 million people are expected to cast their ballots to elect their representatives to the 545-member Lok Sabha - the lower house of India's legislature. Results are set to be announced on May 16.

The latest opinion polls predict a strong lead for the opposition coalition led by the Bharatiya Janata Party (BJP) and its prime ministerial candidate Narendra Modi, while the ruling Congress Party-led alliance is tipped to suffer a crushing defeat.

In a DW interview, political analyst Milan Vaishnav explains that corruption scandals and a floundering economy have led to a strong sentiment against the Congress Party and that particularly young voters are likely to vote for the BJP, attracted by Modi's message of aspiration.

DW: What political issues will determine the outcome of these elections?

Milan Vaishnav: No single issue is more important in these elections than the state of the economy. Indian voters have repeatedly listed economic growth/development, inflation and corruption among their top three concerns. More than any time in recent Indian history - due in part to the slowing Indian economy and the spate of high-profile corruption scandals in recent years - economic and governance issues loom large for the Indian electorate. This will redound to the benefit of the opposition.

Do you see any chances of a Congress-led UPA coalition maintaining power?

The odds of a Congress-led UPA coalition maintaining power are slim to none. Nearly every recent voter survey suggests that the Congress is headed for its worst defeat in the post-independence period. 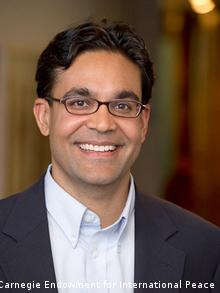 The Congress, it seems, will be lucky to make it to triple digits in terms of parliamentary seats. There is a strong anti-incumbency sentiment against the Congress, driven in large measure by the floundering economy.

Assuming the opposition BJP emerges as the strongest party in the polls, do you see Narendra Modi becoming India's next prime minister?

Narendra Modi is, without a doubt, the front-runner to become India's next prime minister. The BJP is expected to get nearly 200 seats on its own, plus another 25-30 seats for its allies. Some polls place these numbers even higher. Either way, the BJP is in prime position to cobble together a majority of seats in Parliament (272 or greater out of 543) with Modi at the helm. Only if the BJP were to seriously under-perform these projections would Modi's position become untenable.

Many in India still blame Modi for failing to control the 2002 deadly Hindu-Muslim riots in Gujarat, the state he has governed since 2001. Do you believe this may end up affecting his bid for the office of prime minister?

The 2002 riots have been brought up repeatedly during the campaign season. There is still a significant minority that believes the events of 2002 represent a blemish on Modi's record that cannot - and should not - be expunged.

However, it seems that much of the country has moved on and is more consumed by issues of the economy and governance. Only if the BJP performs well below expectations could Modi's position be at risk. For instance, if the BJP won fewer than 180 seats it may be forced to sideline Modi in order to corral enough allies to form a government. There are a number of parties who might consider tying up with the BJP but not one led by Modi.

The possibility of rejecting all the candidates standing in the election by choosing the "none of the above" or NOTA option was just recently introduced to the electoral system. Has this led to political parties fielding candidates with a clean image?

NOTA doesn't seem to have had made an appreciable difference on the quality of candidates nominated this time around. A significant percentage of the candidates in the fray thus far face criminal cases, including many cases of a serious nature. NOTA lacks teeth because it is not the same as a "right to reject."

The largest democratic exercise kicks off

The poll to elect India's Lok Sabha has begun, with voting being held in the northeastern states of Assam and Tripura. The election is set to be held in nine stages over the next five weeks. Results are due on May 16. (07.04.2014)

India goes to the polls

Indians go to the polls from April 7 to May 12 to choose a new government. And the millions of young people in the country will play a major role in what is becoming a new kind of campaign. (01.04.2014)

As India prepares for general elections, eleven regional parties have joined forces in a bid to become a serious contender to the country's two main national outfits. DW examines the new bloc and its potential impact. (28.02.2014)

If a majority of voters choses NOTA, there will be no re-poll; the candidate with the next highest number of votes is merely declared the winner. For many, NOTA represents a wasted vote. In some constituencies with slim winning margins, it is true that NOTA could affect the final outcome. However, it is not clear who will be hurt by this.

How decisive will regional parties be in determining which of the two main national coalitions will form the next government?

Regional parties will be important, but perhaps less pivotal than expected. A strong showing by the BJP-led NDA would mean that it would require the support of relatively few regional parties to form a government.

Twelve months ago, pre-election surveys were pointing towards a truly hung assembly; but the situation seems to have evolved in a way that makes the regional parties less decisive, though hardly irrelevant. Whichever party forms the next government will require the support of several regional players.

Will the Aam Aadmi Party emerge as a major political force from the elections?

There are numerous obstacles that work to prevent a major showing by the AAP. First and foremost, the AAP is struggling to identify the resources and talent to construct a nationwide organization. Second, the party suffered a significant setback following its ill-fated 49-day stint governing Delhi.

Following the dissolution of the Delhi government, many in the middle classes, especially in the media and among those who funded the AAP, began to have second thoughts about its capacity to transition from an agitational force to a governing party. Pre-election surveys suggest the AAP will be lucky to win 10-12 seats across India. That will make it an important player, make no mistake; however, it is well below what its proponents were suggesting just months ago.

How decisive will the Muslim vote be?

Just as the Hindu vote is not monolithic, neither is the Muslim vote. Of course, it is true that the BJP has struggled - and continues to struggle - to attract sizeable Muslim votes due to its Hindu nationalist ideology. But, the Muslim vote, on the other hand, does not benefit any one party. It appears to be divided among many alternatives, which vary by state. So while Muslim voters represent a sizeable chunk of the electorate, their impact could be blunted due to fragmentation.

Which role will caste and religion play in these polls?

Caste and religion, or identity considerations in short, continue to play a role in Indian elections. However, their relevance is not as straightforward as it once was. Identity continues to be a filter through which many, if not most, Indians view politics and elections. 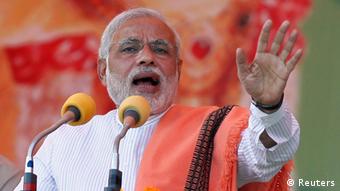 Vaishnav: "Polls suggest that young voters are gravitating towards the BJP, attracted by Modi's message of aspiration"

However, identity politics now coexists with programmatic policy concerns, such as the economy. A recent all-India survey by the Lok Foundation (to which I contributed) reveals that Indian voters are deeply biased toward - or against - candidates depending on their caste or religious backgrounds, but they also are relating more and more with larger considerations of the economy and governance.

Thus, India is now in a world of so-called "caste-plus" politics; meaning parties win votes frequently on the basis of caste "plus" other considerations. Identity is often a means to a larger end, not just "social justice" in and of itself.

Which role will young voters play in these polls?

Young voters are a big unknown this election. Data suggest there may be over 120 million first-time voters, more than the number of voters who voted in the 2012 US presidential election.

However, we lack data on the extent to which these millions of young people are registered and/or likely to turnout to vote. Having said that, polls suggest that young voters are gravitating towards the BJP, attracted by Modi and his message of aspiration. In fact, as voters get older they are less likely to vote BJP and more likely to support the Congress.

Milan Vaishnav is an associate in the South Asia Program at the Carnegie Endowment for International Peace. You can follow him on Twitter @MilanV