Octopuses have a well-developed brain, are attracted to colors and are ′delicious′ | Science | In-depth reporting on science and technology | DW | 09.07.2010

Octopuses have a well-developed brain, are attracted to colors and are 'delicious'

Despite the recent fame of a certain eight-legged prognosticator, scientists have known about the advanced behavior of octopuses for centuries. 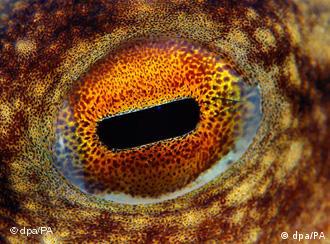 Octopuses can make out certain colors and shapes

Throughout the World Cup, German fans have been delighted - and most recently disappointed - by the so-called 'predictive' ability of Paul the Octopus, who lives in an aquarium at the Sea Life Oberhausen in northern Germany.

Paul has correctly predicted all the results of Germany's World Cup matches so far by choosing between two boxes containing food rewards, each marked with the flag of a soccer team. Deutsche Welle spoke with Drosos Koutsoubos, a professor of marine biology at the University of the Aegean in Greece, to learn more about octopuses.

Deutsche Welle: What can you tell me about octopuses in general? How many species are there? Can you say anything about the particular species of this one, Paul, who has been 'predicting' these football matches?

It belongs to a group of animals, the cephalopods. This group of animals, in particular octopuses, are characterized by the fact that they have a well-developed nervous system which gives them the opportunity to display advanced behavior. They do have the possibility to learn something, to exhibit quite complicated behavior despite the fact that these are invertebrates.

So this octopus here in Germany, Paul, is he an octopus vulgaris?

Most probably, he is. But I'm not sure about that. You must have the animal in front of you to say that with 100 percent accuracy. This is a common species to keep in an aquarium, so probably it is that.

You know, it doesn't matter if it is octopus vulgaris or another species - all of the species belonging to the genus octopus are characterized by what I mentioned earlier, a very well-developed nervous system to give them advanced behavior.

Do octopuses live in all of the seas around Europe? Do they prefer one type of water temperature or one region or another?

They're mostly in the Mediterranean and the Atlantic waters up to the English Channel. This is the known distribution of the species, or at least what scientists have determined in recent years. In the past it was thought to be all over the world - a cosmopolitan species.

This is a coastal species. That means it lives in depths of less than 200 meters (656 feet), what we call the continental shelf. And it is a common species, usually found on the sea bottom [in areas] covered with plants, sea grasses and so on.

What do octopuses typically eat?

This typically eats crabs, mollusks, mussels. In general, these are delicious for octopuses.

Octopuses come in many different sizes. Do all of them eat the same thing, more or less?

Yes, in general, these are the organisms that they consume. From species to species there are differences, but in general mollusks and crabs and so on are the main food they consume, because they have the capacity to catch them. [They're quick], because they can swim, but it's not easy for them to catch fish. Although sometimes, fish remains have been found in the stomach of these animals.

You said octopuses have a well-developed nervous system. Are they able to process visual information? Can they see, or can they see colors?

To a certain degree, yes. They have a very well-developed nervous system. These animals have been used in the past with biologists and those people working with physiology who study the way in which the nervous system is working. Their nervous system gives them the possibility to have advanced behavior. They can recognize objects. They have learned behavior. They can have a good view of the surrounding area and of other organisms and they use it for communication with each other, even if they are a solitary species.

Do scientists understand how octopuses are able to process visual information? Can they see all colors? Some colors?

They do have a capacity to see colors. But you know, it's not like the bulls, in my opinion. It is well known that in a bullfight the bull is attracted by the color red. To my knowledge at least, a similar phenomenon hasn't been proven for octopuses.

Obviously, I'm asking because of the colors of the national flags. I've read that Paul was attracted to the flags because of certain colors or shapes. Do you think there's anything to that or do you think it's just random?

Well, I'm not a specialist in the behavior of octopuses and I can't give you with certainty an answer to this particular question. At least to my knowledge, it's rather a matter of random selection rather than any other selection.

Of course, what is the color of their prey? For example, crabs or lobsters, usually among their prey, they do have a dark brown to red color, and mollusks have a pale brown to white color, or stripes.

You said that octopuses are mostly in the Mediterranean and then in the Atlantic, but only up to the English Channel. Do they tend to stay in more temperate, warmer waters?

Yes, if we speak about octopus vulgaris. There are other species distributed in even colder waters, and there are some that prefer warm waters. In general, though, these creatures, the genus octopus, are not found in cold waters. They prefer to stay in temperate waters.

You said octopuses have an advanced nervous system. How can we observe that? Is it because they go after moving prey and they have to be able to track it?

No, it's not only a matter of behavior, it's a matter of anatomy study. Scientists have devoted a lot of study [in this area] since the beginning of the 19th century. Even the ancient Greek philosopher Aristotle almost 3,000 years ago knew about these characteristics of cephalopods and in particular octopuses, even with the primitive means they had at that time.

[As seen in their anatomy and through behavior], they have a very well-developed nervous system, and they do have an advanced brain in relation to their phylogenetic position, as an invertebrate.

Finally - as a marine biologist, as somebody who has studied the octopus and other marine animals, does that make you think twice about eating octopus?

Well, octopuses are a common marine biological resource. Octopuses are eaten all over the world in areas where this animal is found. It's also written in the texts of the ancient philosophers and writers that it is a traditional food.

In general, from what the scientists have seen from the population of this animal, they are not in any threat. Of course, we're speaking about the rational management of these resources. In cases where there is overfishing, then they may face a problem. The countries around the Mediterranean - not just Greece and Turkey, but Cyprus, Tunisia, Spain and France - all the countries in the area are consumers of octopus.

What about you? Do you eat octopus?

Yes, of course. It is a delicious food. If you ever have a chance to visit us on the island of Lesbos, then we could invite you to have a taste.

Paul the psychic octopus has provided German fans with a bit of solace, picking Germany to win its third-place match against Uruguay. In the finals, Paul went with Spain, which he picked to beat Germany in the semis. (09.07.2010)

Spain's political leaders are worried about the safety of the oracle octopus who correctly predicted Germany's defeat to Spain in the World Cup semifinals, as Germans demand a public roasting. (08.07.2010)