Spain's political leaders are worried about the safety of the oracle octopus who correctly predicted Germany's defeat to Spain in the World Cup semifinals, as Germans demand a public roasting. 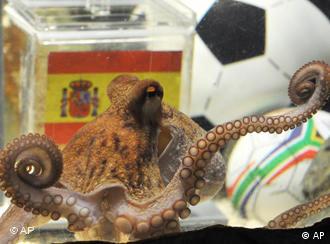 Paul the octopus picks the next winner on Friday

"We will send Paul a team of bodyguards," he joked after Spain's win over Germany at the World Cup in South Africa on Wednesday.

His environment minister, Elena Espinosa, would even like to file for endangered species status so that Germans do not eat Paul.

No wonder - after the German team's defeat, German newspapers and websites were filled with suggestions of what to do with Paul. Most involved cooking and eating him.

The two-year-old octopus has become a global celebrity for his uncanny ability to predict the winner of all Germany's matches by choosing to eat a morsel of food from boxes draped with the flags of the German team and their rivals.

Four times he chose the Germans and they won; twice he correctly chose the rival team.

On Friday, fans from Spain and the Netherlands will be anxiously watching Paul's pick for the Spain-Netherlands final on Sunday, while Germans are hoping for a third place finish in Saturday's Germany-Uruguay match.

Networks in Germany, Spain and the Netherlands are planning live coverage of Paul's picks.

An octopus famed for his skill at predicting winners of World Cup soccer matches has selected Spain to beat Germany in Wednesday's semifinal. German fans will be hoping this is Paul the octopus' first wrong prediction. (06.07.2010)