Ocean College: Guardians of the rainforest

The students of Ocean College have left their ship and moved to the rainforest of Costa Rica to become guardians of the rainforest. Lotte reports. 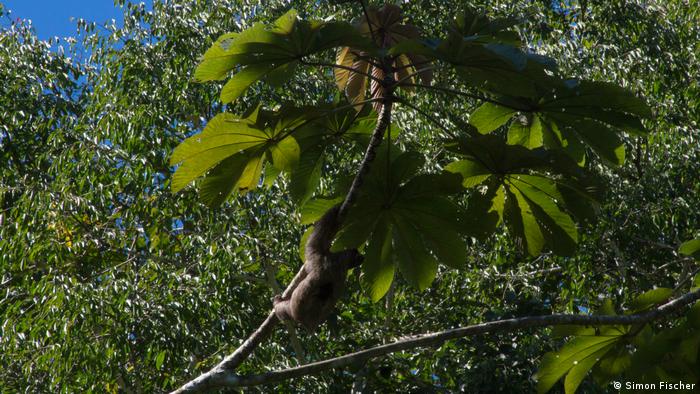 This was to be a very special day: We'd spent the whole week at the One World Farm, a wildlife sanctuary in the rainforest of Costa Rica. The aim here isn't just to protect the rainforest and those who live in it, but to give volunteers a chance to get a taste of life within it and learn more about permaculture, sustainable agriculture and the life and traditions of the indigenous community.

All week, Ken Tiemann, founder of the farm, had been priming us for the experience of being trained to be real rangers or guardians of the forest. To be honest, when that day came, I wasn't really very motivated. But after a few minutes, we ran into a sloth dangling from a branch. It moved very slowly, so we were surprised to learn that by its standards, it was practically racing.

At some point, we left the paths we already knew and came across a bright yellow viper sitting on a leaf. Fifteen minutes later, we had a close encounter with another snake. One of us had accidentally stepped on it, but Ken explained that the best thing to do in such a situation is to move away so it can slip off into the bushes. Fortunately, that's exactly what happened.

Suddenly, Ken's assistant Adolfo spotted a track created by poachers. There is no way I would have noticed it. The only sign it was there were the plants that had been cut back with a machete. We checked the path for footprints, but those we found were older than three months. Had they been fresh, we would have set up one of the two camera traps we had with us. 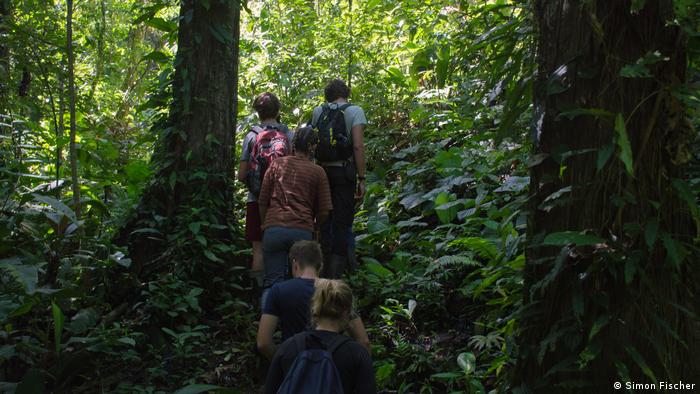 As we continued, the path became steeper, muddier and more slippery. Walking became harder and my strength began to fade. Ken, Adolfo and some of the others in our group had to cut through the vegetation with increasing frequency. It was while I was evading Ken's machete, as we had been taught, that it happened. I stepped in an ants' nest.

All of a sudden, they were everywhere, scurrying through my shoe and biting me. In a state of mild hysteria, I ran to my group, who took off my shoes, removed the ants and calmed me down.

After we recovered from the shock, we took a break and to lift our spirits and blood sugar levels, had some banana cake that we'd brought with us, wrapped in banana leaves.

With fresh enthusiasm, we moved on. It wasn't long before we came across an illegal tree stand. What sounds elaborate is in fact just a branch, tied between two trees, parallel to the ground. Illegal hunters spread their own urine in a ten-meter radius around the tree stand to attract animals - some of which are endangered species - and sit back and wait.

This kind of hunting is illegal in Costa Rica. We photographed the tree stand, broke the branch and tied a message to it as a way of showing the poachers the forest is regularly patrolled. If they come back, charges will be filed and they could go to prison.

The most important incident for us as guardians of the rainforest was an illegally felled tree. A few years back, Ken had to deal with people from the city settling down in the middle of his property, building a house and even creating fields and pastures. That's why it is so important to patrol the entire area thoroughly on a regular basis.

We were all photographed on the long tree trunk giving a thumbs' down. Ken and Adolfo will print the photo, laminate it and attach it to the tree as another means of saying: We've seen it, we're keeping our eyes on you, this will have consequences! Next time Ken comes here, he will also install a camera trap. 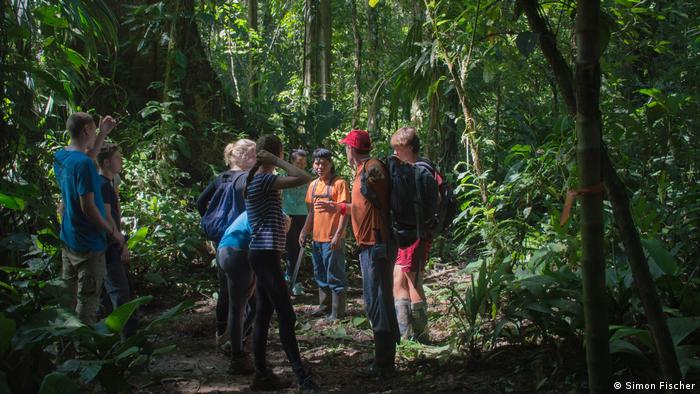 Shortly before lunch, we came across several huge colonies of leafcutter ants, which because they build their nest network underground, aren't always easy to spot.

About three streams, a small scorpion, five steep slopes, seven colorful butterflies, leafcutter colonies, two snakes and two incredibly painful ant bites later, we had made it! Completely exhausted yet very proud, I stumbled the last few meters up the gravel path to the house where we were staying during our time in the rainforest and once there, tried somehow, to remove my mud-encrusted hiking boots.

Just as we had been planning, Nora, Wanda, Merle and I sat down on our private little balcony with a glass of cold juice and cookies. Nora, who hadn't been on the excursion with us, told us that while we were gone, she'd seen a scorpion -- in our room behind the backpacks!

It didn't take long to find it again, but when we failed to catch it in a cup, we asked Ken to help us. He put some insect repellant next to our beds and explained that the spray would drive the scorpion away and that it had probably already escaped the room. So far, it hasn't shown up again. It's not really dangerous anyway, it's sting is just about as painful as that of a bee.

In the evening, I went to bed exhausted. Thinking about everything I'd seen that day, I fell into a deep slumber – after all, guardians sometimes need some rest too.