During talks with his Indian counterpart Narendra Modi, US President Barack Obama has praised India's work on its nuclear reactors. Activists meanwhile called on Obama to address human trafficking in India. 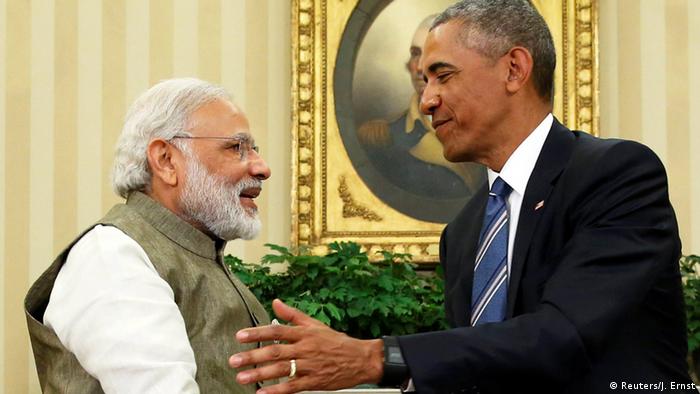 Offering Modi a warm embrace, the visit marked a huge change in relations since Obama was first voted into the White House in 2008, when the Hindu nationalist leader was still banned from visiting the US due to his role in anti-Muslim riots that left hundreds of people dead.

Top of the agenda on Tuesday was India's preparatory work on six nuclear reactors. Obama said he welcomed the progress, which marks a key step in closing the first deal, deriving from a US-India civil nuclear accord reached more than a decade ago.

"Once completed, the project would be among the largest of its kind, fulfilling the promise of the U.S.-India civil nuclear agreement and demonstrating a shared commitment to meet India's growing energy needs while reducing reliance on fossil fuels," a joint statement said.

In 2005, then-President George W. Bush ended a three-decade-long suspension of nuclear cooperation with India. The country had previously been expelled from a nuclear trading group in the 1970s following a series of nuclear tests.

During his time in office, Obama has sought to further remove the nuclear issue with India in order to forge better ties.

"We discussed the progress that we have made around civil nuclear energy, and I indicated our support for India becoming part of the Nuclear Suppliers Group," Obama said.

Despite the US' backing, it remains unlikely, however, that China would allow such a move.

The two government leaders also announced plans on Tuesday for India and the US Export-Import Bank to work together toward a competitive financing package for the project. The contractual agreements are expected to be finalized by June 2017.

Also on the schedule was the Paris agreement which was reached in December last year. The accord forged in the French capital aims to curb climate change on a worldwide scale.

"We discussed how we can, as quickly as possible, bring the Paris agreement into force," Obama told reporters.

Further meetings later on Tuesday could also bring deeper military cooperation between India and the US, which for years has been stalled due to India's concerns about weakening the ability to act alone militarily.

As Obama and Modi met on Tuesday, activists called on the US president to use the visit to raise concerns over India's progress in combating modern slavery.

According to the 2016 Global Slavery Index, India has the most slaves in the world, with more than 18 million people trapped in debt bondage, forced into marriage, sold to brothels or born into servitude.

Indian officials responded, however, by pointing to a number of initiatives taken by Modi's government since his sweeping election victory in 2014 and claiming that they were proof that New Delhi was taking the issue seriously.

Indian Prime Minister Narendra Modi is in Switzerland to discuss science, business and the moot question of funds alleged to be hidden in Swiss banks, away from Indian tax authorities. The Swiss deny the claim. (06.06.2016)

"Assuming responsibility for today and tomorrow"