Obama vows to work with Congress after Democrat defeat

US President Obama has said he will work with Congressional leaders after his Democrats lost control of the Senate, stymieing his legislative agenda. However, Obama said he would use executive powers if necessary. 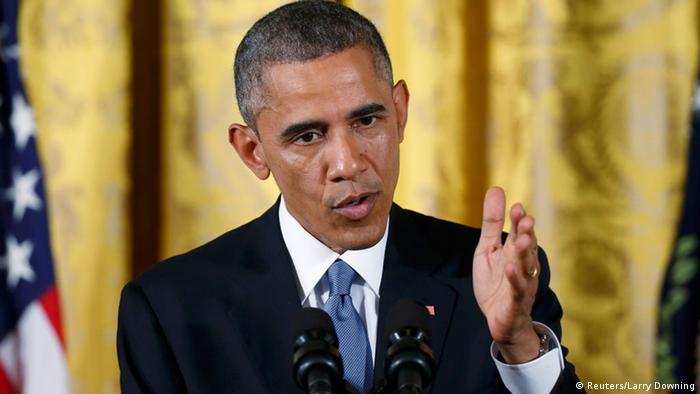 The US president gave a press conference in Washington on Wednesday afternoon, a day after his Democratic Party took a thumping in mid-term elections. Republicans gained at least seven seats in the previously Democrat-controlled Senate - giving them control in both houses of Congress.

"As president, I have a unique responsibility to try and make this town work," the president said at a White House news conference. "So, to everyone who voted, I want you to know that I hear you."

"The fact is, I still believe what I said when I was elected six years ago last night," Obama, who now faces legislative gridlock, went on to say. "I continue to believe that we're more than just a collection of blue and red states. We're the United States."

Obama said he would reach out to the leaders of both houses - John Boehner in the House of Representatives and Mitch McConnell in the Senate.

"What's really important to the American people right now is the resounding message: Get stuff done…do worry about our concerns."

Despite his conciliatory message, the US president said he would press ahead with changes to immigration policy before the end of the year. He added that the goal would be achieved through executive actions - which need no legislative approval - if Congress did not present him with a bill of their own on the issue.

Republicans won at least 52 of the Senate's 100 seats in the November 4 midterm elections. With a majority in the House and now in the Senate, the Republican Party will have the opportunity to curb Obama's legislative agenda for his last two years in office, effectively making him a lame duck. This is the first Republican majority in the Senate in eight years.

House Speaker John Boehner responded to the win for his party, saying that Republicans should be "humbled" and that this was not "a time for celebration," but instead a time to "start implementing solutions to the challenges facing our country."

The Democrats' Senate majority leader, Harry Reid, congratulated his vanquishers in an official statement. Right from the outset, Reid appears to be appealing to the GOP to be more cooperative in control than they were when in the minority.

Obama started his presidency in control of both houses of Congress, only to finish it with neither. The Republicans will hope to carry this momentum over to the presidential elections of 2016 - as the Democrats did at the end of the tenure of Obama's predecessor, George W. Bush.

After their victory in the midterm elections, the Republicans now dominate US politics. It's the start of a difficult political moment for President Barack Obama and the Democrats. Gero Schliess reports from Washington. (05.11.2014)